‘Drinking the Kool-Aid (and Country Time) in the 80s’

Those of us who worked on the General Foods account at Ogilvy used to kid around a lot (big surprise; see ‘Short Men and Flat-Chested Women’ for evidence). We used to say that nothing General Foods made was really a ‘food’. You know, something that could actually sustain life. If you were stranded on a desert island with only GF products to eat, you would, basically, starve.

That’s because everything made by General Foods (or GF as it was fondly known around the shop) was actually a powder. A powder that you stirred into water (Kool-Aid, Tang, Country Time Lemonade-Flavor Drink Mix), brewed with water (Maxwell House Coffee), shook up with meat (Shake ‘n Bake), or mixed with other assorted stuff (Good Seasons Salad Dressing Mix). I don’t mention Jello here, even though it was in fact made by GF, because it (and Bill Cosby) were Y&R’s problem, er product.

My first Ogilvy commercial was one for Shake ‘n Bake. This was in the early 80s, so it actually did not use the famous ‘and I helped’ line. Nope, I got to do commercials with this spokesperson called Pete the Butcher. The 80s were replete with spokespersons: Cora (Margaret Hamilton, who was the Bad Witch in the Wizard of Oz) for Maxwell House, Grandpa for Country Time. And those were just some of the Ogilvy GF spokespeople. (Don’t forget Bill Cosby for Jello; as if you could.)

Here’s a typical example of a Shake ‘n Bake Pete the Butcher spot that I found. I’m not sure if I did this one or not. That tells you something right there, I’m afraid.

Even without spokespeople, GF spots weren’t all that hard to do. In fact, we made up this formula for Anything GF. Basically, you compared whatever powder you were promoting to what is known in the food game as the ‘Gold Standard’. For example, if ‘good old-fashioned lemonade’ is the Gold Standard, then your Brand Name (Country Time) tastes ‘just like it’. Throw in a bunch of ‘sip and/or bite ‘n smiles’, and you’re good to go. Er, air. Here’s the script:

Announcer, in voiceover as we admire the Brand Name package behind a platter/pitcher/mug of whatever prepared with Brand Name: “New Brand Name. Tastes just like the Gold Standard.”

Husband, reaching for more: “Delicious, Honey. Can I have another Portion Size?”

Go ahead; try it. Insert any Gold Standard/Brand Name combo. Honest to goodness, it works.

Oh, speaking of work. We used a lot of shorthand around the office, when we weren’t kidding around. These were the days of paper memos, remember? So putting things in them like ‘must remember to use TLGOFL at least once per spot’ and ‘NTTNTS must be spoken by person tasting the product’ saved a lot of typing time. TLGOFL (pronounced ‘tee ell gofful’) meant ‘tastes like good old-fashioned lemonade’. NTTNTS (just like it looks) was ‘not too tart, not too sweet’. We would utter these phrases in client meetings. Without giggling.

General Foods is now, alas, long gone. You can read about its rise and decline here, if you are so inclined. Oh, and here’s something interesting about Shake ‘n Bake that wasn’t in the Wikipedia entry. My boss at Ogilvy, Josephine Smith, she of the aqua lizard Maud Frizon shoes, invented it. She was at General Foods, touring the Grape-Nuts plant, when she noticed big barrels of what they called ‘fines’. Which was the powder that was left over after grinding up the Grape-Nuts.

She asked what they did with this powdery stuff. ‘Sell it for pig feed’ was the answer. Well. Good ole Josephine suggested they add some spices and whatnot, and sell it as a coating instead. There’s got to be a moral — or something — in there somewhere.

I’ll close with something that happened to me recently at a reunion of Ogilvyites from the Fabulous 80s. I was wearing Ogilvy Red and sipping away at a giant martini when this woman approached me. I didn’t immediately recognize her, but she opened the conversation by saying how great I looked. Ordinarily, this would be a good starter, but she sounded, well, surprised.

She went on to relate an anecdote about how she took me to the emergency room when I collapsed with a stroke on a Tang shoot. So, natch, she was amazed that I was even alive, much less looked so darned great. 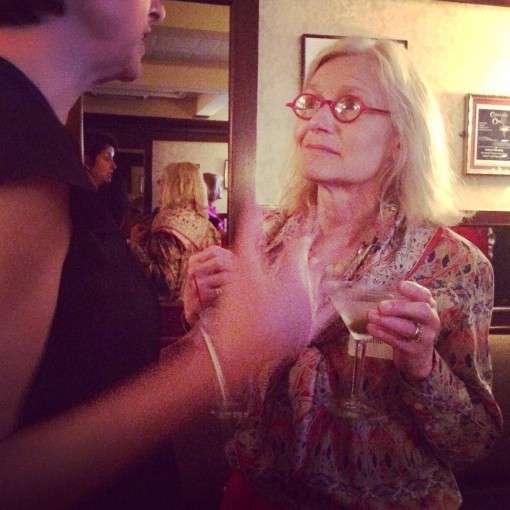 Me, reacting to Nice Woman at the Ogilvy Reunion asking how I was feeling after ‘my stroke’ on the Tang shoot

So what did I say? ‘That couldn’t have been me. I never worked on Tang’.

For more Advertising Hilarity, check out ‘Old MacDonald Had a Silo’, ‘The Most Fun You Can Have With Your Clothes On’, or just about any post you see in the sidebar under ‘Adland Lore’. And don’t forget to check out the story of another Famous Spokesperson I Had the (dis)Pleasure of Working With, Karl Malden.

Enjoy your week. More next Tuesday. I’m thinking I’ll do a story about Great Aunts and Glorified Rice.

18 thoughts on “General Foods, we salute you”