‘More Ad Biz Fun, on the Left Coast this time’

I usually try to mix things up a bit, topic-wise. But somehow I couldn’t get psyched for a riff on Tax Day. So, since people seemed to get a kick out of my Mad Men critique, I thought I’d mine my Ad Biz memories for more material. When you’re on a roll, you’re (ahem) on a roll.

This one is about going on ‘Shoots’. Where you’d fly to some nice warm location, say Los Angeles, and film, i.e. ‘shoot’, a television commercial. I’m pretty sure that this still occurs. Some people at the agency where I am freelancing right this very minute, in fact, just went on a ‘shoot’ in ‘LA’.

But I’m thinking they probably didn’t stay at the Beverly Hills Hotel and nibble raspberries poolside while pretending not to eye Tom Selleck in his speedo. 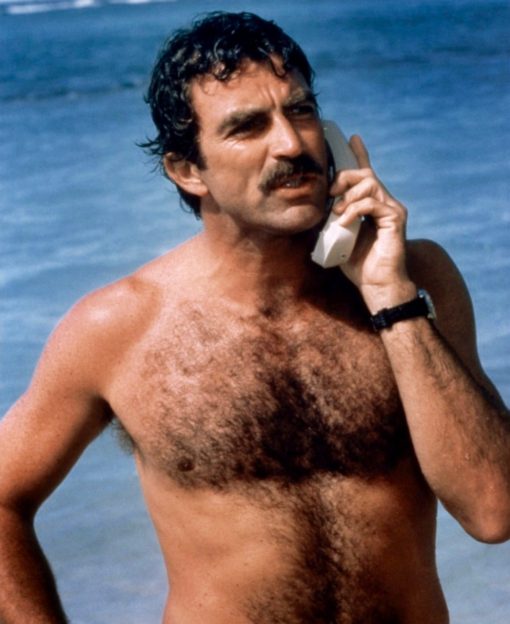 Oh, and we used to rent convertibles and drive down Sunset Boulevard to watch the (yup) sunset. And eat in really expensive trendy restaurants. All courtesy American Express or Country Time or Hershey, or whoever the client was at the time. Trust me, the clients weren’t complaining. They were totally in on it. And in their bathing suits, in the next cabana, also pretending not to eye Tom Selleck.

Speaking of expensive restaurants, one time when a bunch of us were at a fancy pricey dinner, my boss picked up his fork and announced to those assembled, ‘This isn’t a snow pea. This is fifty bucks.’ Then, at the end of the meal, he tried to pass me the check. Now, I could have paid it; I would have been reimbursed. But I took one look at it, gasped, and said ‘Harvey, I can’t pay this. This meal cost more than my first car.’ (More about Harvey, who was hilarious, here: ‘Old MacDonald had a Silo’)

When we weren’t eating raspberries and snow peas, we were actually working. Shooting commercials (back then anyway) took a lot of time. There was casting and location scouting and the actual shooting itself. Which mainly consisted of waiting around. Sometimes for weather. Sometimes for peacocks.

One time we were shooting some Country Time spots and, as luck would have it, it rained and rained and rained. We kept having to call ‘weather days’. Which meant that the client had to essentially pay for a day where nothing happened at all. This felt a lot different than paying for a day when said client could work the phones poolside and eye Tom Selleck.

So, after the second or third weather day, we decided to go for it. Just tent the whole blasted thing and shoot. So we covered the front porch of this ‘farmhouse’ with big transparent sheets of plastic (Or the Grips did, actually. We watched, breakfast burritos in hand), set up huge honkin’ arc lights and rolled the film.

A couple of days later, though, when we were watching the ‘dailies’ (We used film, which had to be developed. We’d gather in a theater and watch it to make sure it came out okay. This was called ‘watching the dailies’.) Well, we’re watching away. Our Country Time ‘Grandpa’ was waxing nostalgic about meeting ‘Grandma’ when they were young and thirsty when one of us goes ‘What’s that noise?‘

Well! It had rained and rained for so long that we didn’t notice (nor did the sound man, apparently) that rain was drumming on the tarp the whole time we were shooting. The sound was definitely drowning out poor Grandpa. So what did we do? We gathered the whole darned cast, the ones with speaking parts, in a sound booth and dubbed the whole darned thing. If you can stand a little saccharine, here it is (Yup, that’s a very young Ed Begley playing Young Grandpa):

We used to cast lots of Young Actors on The Way Up. That’s where they all go, you know. To LA. You can’t throw a pebble in LA without hitting some Young Future Famous Person. I shot a Shake ‘n Bake spot with one horribly-behaved Future ‘Annie’. Her Mom was even more horribly-behaved. But about those peacocks.

We were shooting yet another Country Time spot, this one about some kids planting a tree. (Don’t ask.) One of the kids (Wil Wheaton) grew up to be in ‘Stand by Me’. But, at that stage of his Career, he was holding a sapling that had been thrust into a hole surrounded by dirt in some LA park and trying to say his lines at the same time. Which were something like ‘Grandpa, planting this tree is making me thirsty. How about some good old-fashioned lemonade?’ Or something.

But someone waaaaay in the background kept yelling ‘Help! Help! Heeelp!‘ One of the PAs (production assistants; people basically paid nothing to run errands on a film set and add this to their resume) went to investigate. Turns out the park was full of peacocks. Which if you haven’t heard for a while, do sound remarkably like people calling for help. We had to station a couple extra PAs down at the peacock end of the park just to shoo them away between takes.

Well, I could go on and on. But that freelance job awaits my attention. Time to hit the Effing F Train. Stay tuned for more Ad Adventures. Next time I write about them I’ll fill you in on Shoots in Foreign Countries. (It’ll be a real trip.) But, if you want more ad stories right now (or missed them the first time around), just click on the ‘Adland Lore’ tab in the sidebar.