‘Don’t leave home without it.’

Fair warning: if you are related to Karl Malden, or are the president of his Fan Club or anything like that, you may wish to stop reading this post. Switch to the one about the silo. Or the one about Bruce Dern and the sweepstakes.

Because this is an Ad Story in which Karl is the butt (as opposed to the nose) of the joke. But he deserved it. As you will see. To mangle a phrase, ‘Hell hath no fury like a bunch of creative women dissed’.

First, a little (probably necessary) background. Karl Malden was a movie star once upon a time (terrific as Mitch in ‘Streetcar Named Desire’; good in ‘On the Waterfront’ too). But it was his run as a police detective on a TV show called ‘The Streets of San Francisco’ (with a youngster named Michael Douglas as his sidekick) that got him his looooong lucrative run as the Spokesguy for American Express Travelers’ Cheques (‘Don’t leave home without them’). 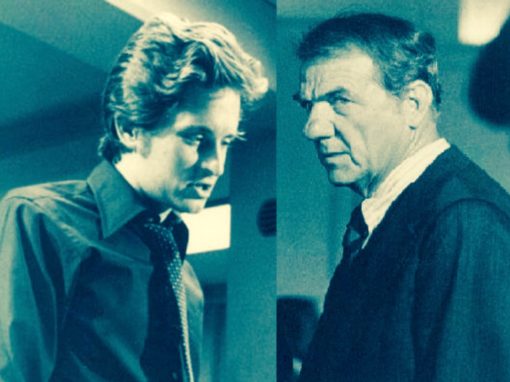 It grieves me to realize that I just explained who the hell Karl Malden was and now I have to explain ‘travelers’ cheques’. (Do they even make travelers’ cheques anymore?) Anyway, travelers’ cheques were these things you’d get before going on a trip to use instead of cash because, if you lost them or (gasp) if a bad guy stole them, you didn’t lose out. American Express would replace them, and you’d be fine.

In order to get people to use their travelers’ cheques instead of dangerous old cash, AmEx (as we who worked on their business affectionately called them) ran these commercials where pathetic travelers who used cash were duped and/or robbed and lost their money. Then Karl, wearing his trademark tough-guy hat, would remind us, sternly, not to leave home without our American Express Travelers’ Cheques.

Well, if you were assigned to the travelers’ cheques business, what you had to ‘do’ was put up with Karl Malden. He was not only famous for his outsized nose, but for his outlandish prima-donna behavior. Especially toward women. (Well, toward women he had to work with; maybe he got along super-swell with other women).

You guessed it: I was the lucky woman writer assigned to this account. Oh, before I forget. It didn’t help that Karl really liked the writer — the male writer — who was on the business before me. This guy had just left Ogilvy for greener pastures at a rival agency. So I was told to ‘make friends with Karl’. I was supposed to do this by taking Karl to the Beverly Hills Hotel for breakfast.

Well, during the course of this breakfast (which cost more than a week’s rent), all I heard about was how the previous writer was so terrific and that no one else could possibly write Karl’s copy as well as that guy and how the account should just leave Ogilvy and go to where that guy worked instead. To add insult to injury, I lost an earring in the Beverly Hills Hotel coffee shop banquette while listening to Karl whine. It’s probably still in there, nestled deep into the velvety tufts along with an errant raisin or two.

But back to the business at hand. Before we did the new TV commercial, we needed to record some radio spots with Karl. Of course we flew out to L.A. to do this. More convenient for Karl. Hey, not that we minded! These were the days of staying at the Sunset Marquis, tooling around in VW Rabbit convertibles, and eating at Michael’s in Santa Monica.

So we show up at the studio: Mr. Malden, the woman writer (me), the woman producer (Hi, Annie!), and the client, whose name I don’t remember. But she was definitely a woman too.

You can tell that Karl isn’t exactly overjoyed to see us. He glowers, sighs, strides toward the soundproof booth to do his thing. While we’re all subserviently going ‘Good morning, Mr. Malden’, ‘Thank you for coming, Mr. Malden’, and even ‘Would you like coffee, Mr. Malden?’ he walks smack-dab into the glass door of the booth. His infamous nose goes ‘squoosh!’ Ouch. I guess he was distracted by all the hormones in the room.

As if he weren’t already crabby enough, the Nose Incident added injury to insult, and he proceeded to drag his voice-over feet: mumbling his takes, stopping in the middle of takes, refusing to do more takes. I’ll spare you the remaining details of his less-than-professional behavior, but let’s just say that, after the session was finally over, we three ‘ladies’ repaired to the bar at the Sunset, where we ran into Bruce Springsteen. But that’s another story.

You know the old saying ‘don’t get mad, get even’? Well, while we were enjoying our post-Karl cocktails (and trying not to look like we were staring at Bruce), we women, now joined by yet another female, the art director, cooked up a plan.

You see, Karl Malden had this deal with American Express where he earned a yearly fee just by being Karl and being their Spokesguy. But if he actually did anything — like recording radio spots or shooting a new TV commercial — well, then he got a whole lot more money. He’d already recorded the radio spots, so there wasn’t much we could do about that.

But we hadn’t produced the new TV commercial yet. So we came up with this idea, a spot called ‘Break-In’ (which, dammit, I could not find on youtube)*. In ‘Break-In’, this guy is in the shower in his hotel room while a burglar is rifling through his stuff. Including his wallet, which is filled with Dumb Dangerous Stealable Cash. Said wallet is on the hotel-room dresser right in front of the hotel-room TV. As the burglar takes the money and escapes via the hotel-room balcony, we see that the TV is playing last year’s American Express commercial.

Move in on hotel-room TV screen, where we see Karl saying — at the end of last year’s commercial, already shot — ‘American Express Travelers’ Cheques. Don’t leave home without them’.

So hah, Mr. Malden. No new shoot for you. And no new shoot pay, either. We ‘girls’  got you where it hurts: right in the ole pocketbook.

But wait. That’s not all. Remember how Karl smooshed his nose into the recording-booth glass? Well, we not only left the nose print right there, ‘in situ’, so to speak, but we took a strip of masking tape, labeled it ‘Karl Malden’s nose’ and stuck it up there right next to the Nose Print. So no one would mistake this Nose Squoosh for anyone else’s (not that they could).

And, well, I guess we weren’t the only people that Karl rubbed the wrong way. When we returned to that studio the next year to record more spots, The Nose Print and its Label were (yup) still there. For all I know, they remain there today. Like a mini Hollywood ‘Walk of Fame’, only with Karl’s nose instead of his handprints.

I’m sure many of you, particularly my friends from the Wonderful World of Advertising, have some juicy stories like this one. Please feel free to share.

*Late-breaking ‘Break-In’ news from my good blog-reading friend Debi. She found the commercial of which I speak. ‘Break-In’, that is. Go, Debi! So, here you go. It’s pretty much as I remember it, except that the wallet full of Dumb Dangerous Stealable Cash is in the guy’s jacket, not on the dresser. But the ending is still the same, and satisfying as ever to watch: