When I was a kid, the high point of Summer wasn’t the 4th of July, it was the Clinton County Fair.

This Fair was truly an Event For All Ages. If you were a little kid you got to stuff yourself with cotton candy, then get nice and green on the Tilt-A-Whirl or those crazy swings. If you were an adult, you got to feast your eyes on prize-winning livestock and pies or watch cars crash into each other at the demolition derby. 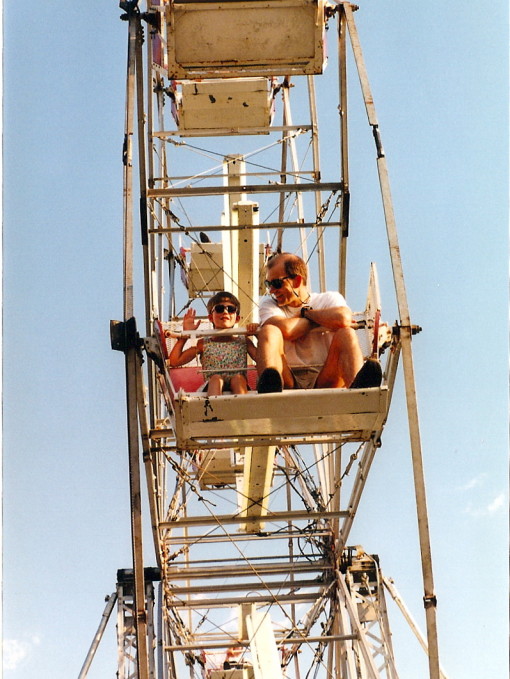 The Child and The Dude take in the view from the (urk, extremely rusty) ferris wheel

And if you were a teen, you got to wander around the midway in awkward same-sex groups, giggling at each other and arranging to ‘accidentally’ ride the ferris wheel together. If you were a boy teen and ‘going steady’, you got to win large stuffed animals at the shooting gallery for your girlfriend to parade around the fairground like pirate booty.

Speaking of parades, they had a dandy. The candidates for Queen of the Fair (a very big deal, then and now) would dress in big frothy gowns and wave to the crowd from the backs of open convertibles. (They’d sit on the back of the car for maximum gown exposure, and do that dainty little vertical ‘Queen Wave’). 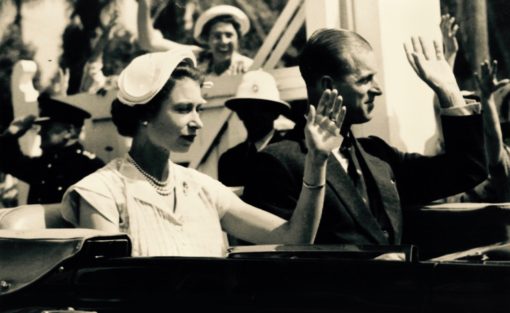 The ‘Queen Wave’ as demonstrated by a real queen (and her king) from an open convertible in a parade. Alas, no frothy gown

The floats would be locally-made and the people riding them would throw candy to the little kids running alongside. (If you got hit, it really hurt. Bet they can’t do that anymore.) The adult spectators quite sensibly watched from lawn chairs arranged along the side of the street. Here’s a picture of an outstanding float I remember from our last Fair Visit. It features a surfboard with, well, a very special message written on the side. (A surfboard? In Clinton County? Sure, we had a lake, but I’m still scratching my head over that one.) 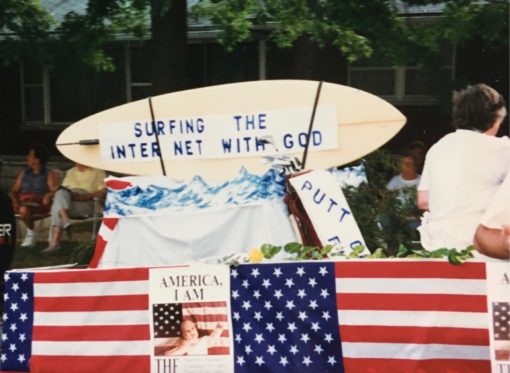 It makes me sad that I don’t have photographic evidence of fair-going from my youth. But We Whitmores did make at least one pilgrimage while The Child was small enough to dig it. (We didn’t want her going there as a teen; she might have fallen for a carny.) Here we are, clutching our Methodist Ladies Lemonade (the best ever; trust me on that one. Their chicken-and-noodles was also legendary, but alas, not available at a Clinton County Fair booth.) 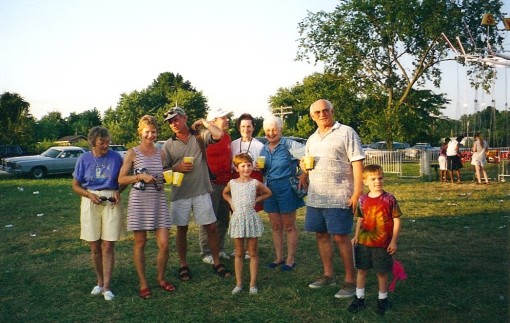 A group of Petersons and Henrys (with a couple of Whitmores thrown in for ‘spice’) dig the Fair sometime in the 90s. Some of us are about to lose our lemonade on that sick-inducing Swing Ride visible in right background

But (no doubt you are asking by now) what about Betsy Bingo? I was saving the best for last. Betsy Bingo was a very popular soft-core gambling game featured at the fair when I was young. (I haven’t been able to ascertain whether they still play it in Clinton County. Anyone out there who knows?) I found out on the internet that they still do (ha ha) play this in Dubois County, which looks like it’s in Iowa. You can win 500 bucks, in fact.

Anyway. Here’s how it works. An open field is divided into a grid. (They’d use that chalk that works on grass; you know, like they use on football fields, or used to anyway.) The squares in the grid are numbered. To play, you ‘buy’ a numbered square (or more). A cow gets turned loose into the field, and wherever she leaves a cowpat (or ‘cow pie’, ‘meadow muffin’ even) well, that square ‘wins’.

I worked for the Carlyle Union Banner in those days (enough fodder here for a post of its own), and wrote a caption for a long-lost photo of our Clinton County Betsy doing her thing which said ‘Go Betsy Go’. And, bless them, they printed it. Gotta love journalism. And small towns.

Well, we had no County Fair Parade here in Amagansett. Not that I know of, anyway. But we did have a whole host of Twenty-Somethings here to liven up the festivities. So I’m feeling somewhat YoYoMa-ish today. I’ll close with a shot of The (Young) Child enjoying the Clark County Fair with her cousin Nat who lives out Vancouver, Washington, way. Just goes to show you that her affinity for porcine livestock goes way back. 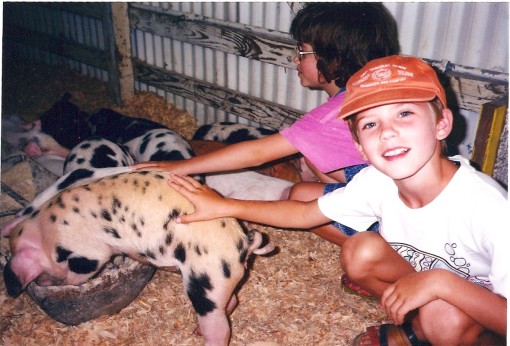 Enjoy these wonderful days of summer while they last, Peeps. And I’ll catch you all next week. Maybe with another Advertising Tale. We’ll see.