‘There’s no such thing as too many cousins’

Looks like summertime-desperation-for-readers has set in. I’m thinking that it’s the time of year when just about anything I write won’t be able to compete with the beach. The only thing worse for my stats would be if it were Christmas. Or if I wrote about the ding-dang South Pole again.

So here goes. Cousins. I worry, what with the trend to smaller families and all, that the whole Cousin Thing will be experienced by fewer and fewer in the future. The Child, for example, has seven Henry Cousins, five of whom are pictured at the top of this post. Of course that’s waaaay more than the measly three the Whitmores managed to eke out. From six siblings (!)

I mean, when I was a kid, we had cousins. The Petersons, who were Swedish and Lutheran and played Scrabble and drank coffee, produced this batch: 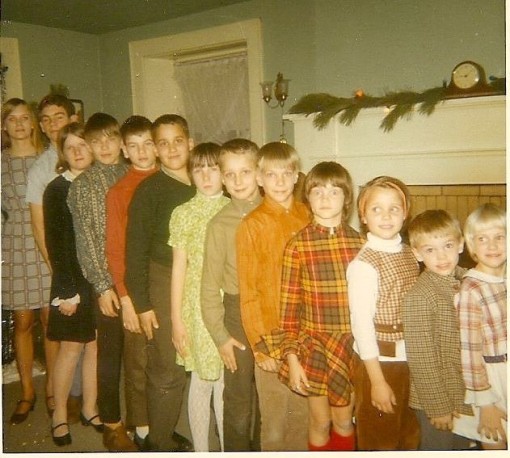 Peterson Cousins, enduring the twin Christmas indignities of wearing scratchy clothes and being lined up by height

(Note that five of these Peterson Cousins are actually Henrys — my siblings and me. Those other kids didn’t stand a chance.)

Meanwhile, my Dad’s family, the Henrys, who were (mostly) French and Catholic and played poker and drank homemade plum wine, produced this batch: 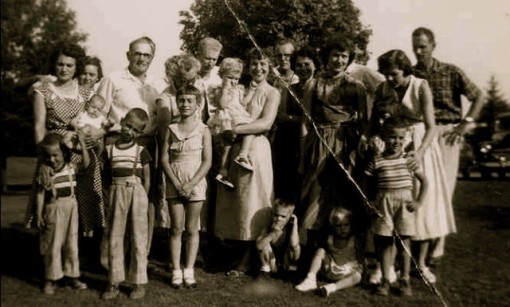 A partial, and very early, sample of Henry cousins. There ended up being way more Henry cousins than these, trust me. (BTW, that’s me on the ground, next to Jimmy-with-all-the-toys, who is sucking his thumb.)

See, the Henrys gathered mostly in the summer. Which meant the cousins were always running around outside and hard to capture in a photo. It’s practically impossible to line up, say, 40-some-odd kids who insist on climbing greased poles and riding farm carts down hills. Much less dress them in scratchy clothes. 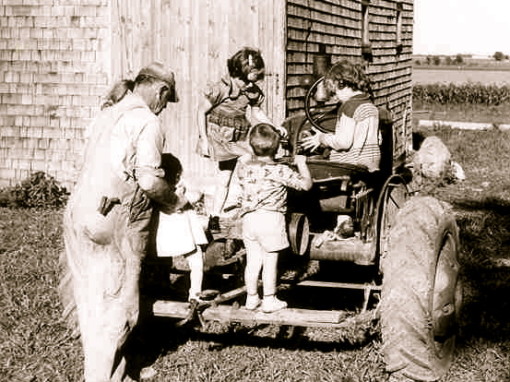 Here’s another shot. Sorry for the poor quality; it’s Summer and I don’t have my scanner here. But you get the idea: 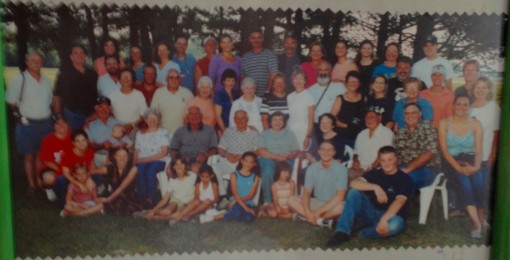 Even more Henry Cousins. Again it was summer, and again, not nearly all of them are here

So what’s so cool about cousins? Well, if you’re lucky enough to have some, you already know. But in case you don’t, or would like to compare notes on cousinly highjinks, here are some of my fond recollections.

For one thing, since you didn’t see your cousins all that often, you didn’t get sibling-sick of them. And if you visited at their house, they had completely different toys. (I had two Henry Cousins named Jimmy. We called one Jimmy-with-all-the-toys because he was — gasp — an only child and had tons of cool toys. Stuff like tropical fish tanks and trampolines and electric trains and sock monkeys. Of course, he also had a Very Strict Dad who wouldn’t let him wear blue jeans. So there was that.)

For another thing, when you were with your cousins, that meant that the Parents were hanging out with the rest of the family. While they were busy playing poker (Henrys) and Scrabble (Petersons), pretty much nobody paid any attention to the kids. The adults kind of threw you all together and hoped for the best.

Apparently, this doesn’t happen that much anymore, more’s the pity. People write in to advice columns and ask about what to do because cousins who hadn’t seen each other in a long time were going to get together. Not to sound all curmudgeonly, but, in the Days of My Youth, parents didn’t fret about this; things just kind of sorted themselves out.

The Big Cousins would play tricks on the Littler Cousins. Like the time Ronnie and Richie got us to eat vanilla ice cream with green peppers. And the time they told my little brother Roger that raccoons were giant beasts who lived in the cornfield and would get him if he went in there. The worst, I think, was the time one of the Big Cousins (I won’t say who, because I think it was one of my brothers) called one of the Little Cousins from a phone extension in another room, and told the poor kid he was Santa. That he’d been watching him, he’d been very very bad, and was getting no toys that Christmas. Ouch. Maybe these newfangled parents have a point, after all.

Before I close, here’s another shot of the picture at the top of this post. As a reward for having read this far, you’ll see why the kids’ faces look all sort of weird and wrinkly: 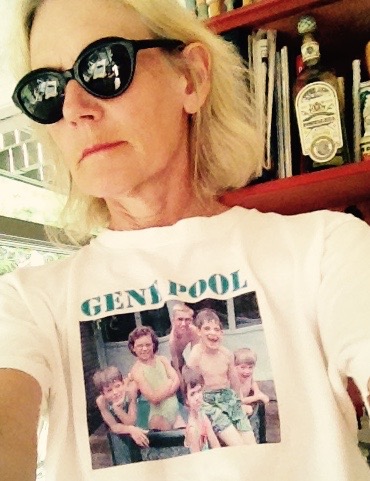 A-hah! ‘Gene Pool’ is an image on a shirt. Designed by my Dad, and given out to various and sundry about 20 years ago. Thanks, Dad. For having a bunch of cousin-producers. Too bad Leo and Ella aren’t in the tub too

One more July post to go, People. Stay cool out there. Oh, and speaking of cousins, if you can handle the heat, feel free to revisit my steamy story ‘The Incest Mug’.

15 thoughts on “Everybody into the Gene Pool”