‘Summer foods that did not come from a farm stand’

Some of you have read my Ode to Corn, and no doubt share my fondness for what can be enjoyed pretty much straight from the garden. (Or, in my case, the farm stand.) But there was a whole other category of deliciousness to be savored during summers where and when I grew up. And that was the food made by Great Aunts and dished out at Family Reunions.

My favorite of these was a dish called Glorified Rice. Here it is, in all its (sorry, I can’t help myself) glory: 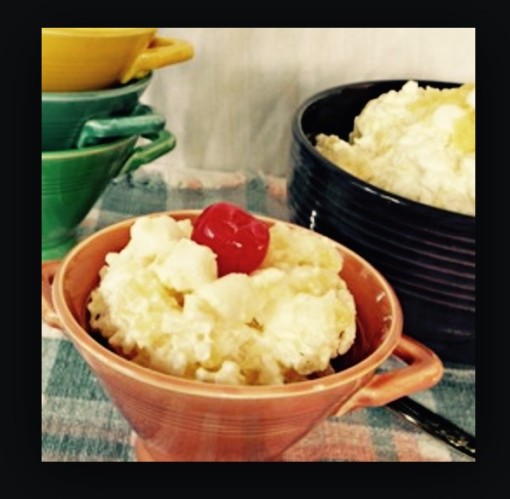 I picked this photo because I have these dishes

Now, the Wikipedia entry for Glorified Rice is pretty hilarious, on a couple of levels. For one, the dish is described as a ‘dessert/salad’. For another, one of its sources was a website called lutheransonline.com, which I clicked (of course) and found is now defunct. Probably all the Lutherans grew up and moved to New York.

But more about these family reunions. They were always held in the summer, mainly so they could be outside. These were the days of Big Families, people. (No way these reunions would fit into a dining room or kitchen. Or a normal back yard, for that matter.) One of my earliest memories is of going to something called the P-A-L (Peterson/Anderson, and Lindstrom?) Reunion, held in Belvedere Park. (There was a swinging bridge that terrified me, but that’s another story.)

We kids ran around while the grownups sat at picnic tables and ‘caught up’. And we all consumed tons of the aforementioned Glorified Rice, served as a ‘salad’, natch. Plus loads of other ‘salads’  like thinly-sliced cukes in sour cream — not yogurt — and many varieties of Jello Salad. (Each Great Aunt had her specialty.)

Speaking of which, it was years till I realized that ‘salad’ could be anything other than jello with mysterious bits suspended in it. It was amazing how many variations there were on the jello-with-bits-salad theme: orange jello with shredded carrots and pineapple, red jello with fruit cocktail, green jello with celery and cottage cheese were classics, and all fairly tasty.

But sometimes a Great Aunt would go sort of jello-crazy and basically put whatever she had left over in the fridge into the ‘salad’. I was once served jello with onions and cabbage. Honest. And it was about as tasty as you’d imagine. I think this particular Great Aunt thought it would be okay since the jello was green.

(The photo at the top of this post features a passel of Henrys and one of the salad-producing Great Aunts. She’s in the back, wearing glasses and a hairnet. She was called ‘Aunt Net’, and I was a grownup before I realized this was actually short for ‘Annette’.)

But back to tasty memories. I can’t write an ode to non-farmstand summer foods without mentioning my favorite summer dessert: Jello Cake. One of the wonderful things about Jello Cake was that there was absolutely nothing natural about it. Everything in it was fake — and delicious. Basically, it consisted of your favorite cake mix, baked in a sheet pan, poked with a fork while still warm and drizzled with a complementary flavor of Jello (made with half the water). You put this in the fridge till the Jello firmed up. Then you served it slathered with Cool Whip instead of frosting. Don’t scoff. This was good. If you’re into recipes, I found it on the Kraft website (formerly General Foods; an amusing story about which can be found here, and enjoyed while you’re waiting for your Jello Cake to set.)

Sadly, Jello Cake was invented too late to have been served at those family reunions. (Or we wouldn’t have had room for all that Glorified Rice.) But it was a Summer Staple at my mom’s. My favorite version was the vanilla cake with orange Jello. It tasted kind of like a Creamsicle. No doubt that’s what we’re sampling in this classic summer kitchen shot: 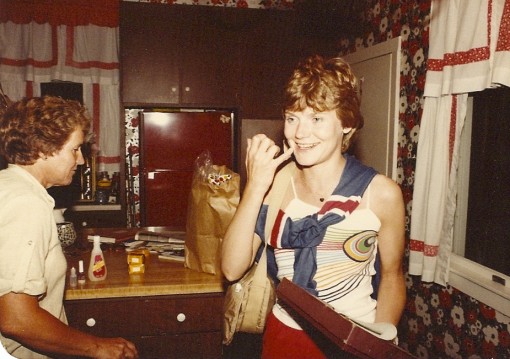 Whatever we’re having, it’s mighty tasty. Note Scrabble board clutched in my non-finger-licking hand. Scrabble was our favorite indoor sport, summer or winter

Speaking of kitchens, I should get downstairs and putter around in mine. Or grab my zillionth cup of coffee. (That’s another thing about Lutherans: there was always coffee in the kitchen, no matter what time of day. True, you could see the bottom of the cup through this ‘coffee’. But still.)

Stay cool, and enjoy your week filled with summer goodness, whether it’s from the factory or the farm stand. Oh! I almost forgot to tell you my favorite farm stand story. I was waiting to buy some heirloom tomatoes at mine (remember when they were just called ‘tomatoes’?) when a woman ahead of me held up a bunch of bananas and asked ‘Are these local?’ I almost spilled my gooseberries. 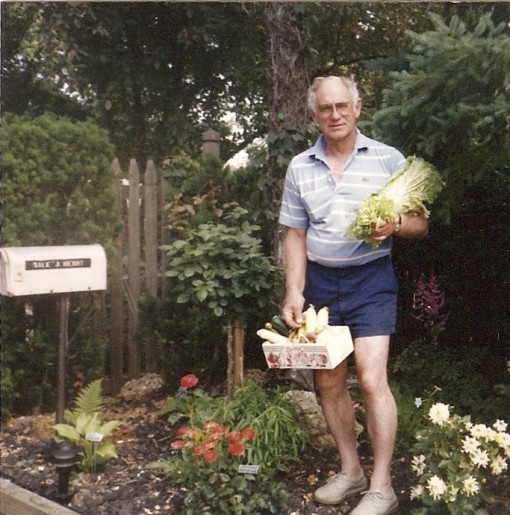 Why we didn’t have a favorite farm stand: we had a favorite dad with a garden instead