‘The Hemlock Room, the round brown hotel, and the cookies in the crinkly wrappers’

It all started when this Big Client had a New Product all shined up and ready to go. The Agency Bosses got wind of it, and got really excited. We wanted that account. We were gonna pitch it.

I guess I should explain. You ‘pitch’ a client when you want their account. Maybe it’s up for grabs, maybe it’s not. Maybe it’s your agency’s account already, and you have to pitch it to keep it. Which is sort of like trying to convince your husband to stay if he’s already ‘looking around’. Even if you do manage to convince him (or the wayward account) to stay, you worry all the time they’re going to leave anyway. Which, most of the time, they do.

Anyway. This was a Biggie. We were gonna pitch the heck out of this one. Wow them, in fact. A Pitch Team was duly formed, and guess who was put in charge. Silly me, I was actually flattered and thrilled by this.

A quick word about the pitch pictured at the top of this post. Being a rather imperfect follower of Mad Men (check out my riff on the show, ‘Short Men and Flat-Chested Women’, if you get a sec), I honestly can’t remember how Peggy’s pitch turned out. I just wanted to use that photo. She looks so darned cute and professional and all. And no photos exist of ‘my’ pitch. At least none that I know of. Which, the way things went, is probably a good thing.

I’ll spare you the grim details of the hours and hours of sturm und drang that went into working on the pitch. Except to note that somehow, when you’re ‘pitching’, work during a normal work day doesn’t count. You and your team are corralled into the War Room (I kid you not; there is always a copy-paper-and-magic-marker sign taped to the door of said War Room, saying, um ‘War Room’.)

‘War Room’: the place where pitch work is done; always, for some reason, an interior windowless conference room, the more unventilated, the better.

After a few days of slaving away, it didn’t help that no one chuckled when I said ‘No fighting in the War Room’, or exhibited a spark of recognition when I said ‘You know, Kubrick. Peter Sellers?‘ Blank, exhausted, looks. 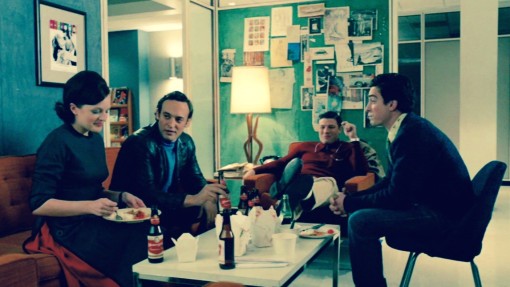 Peggy and Pals eating bad chinese while ‘ideating’ in Pitch Mode. We did the same thing, but in wrinklier clothing

Just picture yourself, on a Saturday — a Saturday night, mind you —  ‘ideating’ (thinking) and churning out ‘concepts’, plastering sketches and scripts and outlines all over those blasted War Room walls.

Then, after hours of sleeplessness and indigestion, the Big Boss strolls into the War Room on Sunday (wearing his golf togs; I kid you not), assumes a thoughtful stance in front of the scripts and taglines and key visuals papering every inch of it, rocks back and forth in his tasseled loafers, then scribbles two words on a napkin, pins it over the acres of work and says, ‘This is it. This is the Big Idea. Work from this.’

Well. Good thing I had a mortgage to pay. And good thing we had another 24 hours before we got on the train to King of Prussia, PA. (An actual place I honestly could not have made up.) Because we basically had to start all over again. There was nothing else to do but order more bad pizza and get cracking.

Again, I will spare you the gnashing of teeth and pulling-out of hair and taking of No-Doz, and cut to a day later. The ‘work’ is being printed and copied and mounted on foam core so that we can stick it on an easel and present it. Assistant Account Executives who eventually will run the agency but who now are the lowest of the low on the totem pole are waiting to drive said work all night in a panel truck to get it to King of Prussia in time to make our 8 AM presentation slot.

Meanwhile, we, the Creative Team (and the Big Account Honcho too, of course), are ensconced in a round hotel (seriously, the place is round; I’m still not sure how they got the furniture to fit) furnished in a rainbow of brown. It’s the kind of place that has those staticky polyester blankets that spark when you pull them up to your chin. And those carpets that shock you when you walk to the bathroom in your socks (which, trust me, you want to keep on at all times.)

Oh — before retiring to the luxury of our pie-wedge rooms, we’re told to ‘meet in the Hemlock Room’ at 6:00 AM for rehearsal’. The Hemlock Room? We’re pitching tomorrow. Maybe ‘Kubrick’ doesn’t ring a bell, but has no one heard of Socrates?

6:00. We’re duly assembled for rehearsal in, yup, the Hemlock Room. Where there is no food, no coffee, and worst of all, no ‘work’ to be rehearsed with. The hapless Assistant Account Execs and Future Agency Leaders driving the panel truck have called from a phone booth on the New Jersey Turnpike to tell us it — the panel truck — has broken down.

The Big Boss tells the panel truck drivers to skip the rehearsal, and hightail it over to the client’s offices. We cross our fingers and hope the truck makes it. It’s one thing to rehearse with imaginary foam core. Quite another thing to actually present with it: ‘If this storyboard were actually here, you’d see that a woman is holding your product…’

Finally it’s Show Time. The ‘work’ has miraculously managed to meet us at the client’s headquarters at 7:45. We’re on at 8:00. As we mill around the hallway, we can’t help but hear amused chuckling coming from the meeting room. Get out. We’re on at 8 AM, and we’re not first?

Nope. Another agency is in there before us, presenting their little hearts out. But we’re not worried. We’re Ogilvy; and they’re not.

The Agency People Who Are Not Ogilvy file out. I guess we should have noticed these curious little smirks on their faces.

We march into the presentation room, which is filled with dozens of potential clients, all seated at these chairs with little desk-like arms. We introduce ourselves, and launch into the Pitch.

I’ve just cranked up the Mood Film, which is a snappy little piece I put together at 3 on a recent morning out of stock pictures and footage and set to Dylan’s ‘Times They Are A-Changing’, the idea being to get the client in ‘the mood’ for the Pitch, when I hear this odd crinkling sound. Turns out the Agency Who Presented Right Before Us gave out cookies after their presentation — and every little desk-like arm holds one: a chocolate chip cookie wrapped in cellophane.

But not wrapped for long. Who knows when those poor clients had to get up to make it to a 7 AM presentation. And who knows when last they ate. No way were they going to mind Bob, and ‘gather now people’, since they were too busy ‘shaking their windows and rattling their walls’ with that darned cellophane.

Next thing you know, we’re on the train heading home, outsmarted and outmaneuvered by the Other Agency. So what did we do? We head to the bar car and demand that it be opened. It’s 10 AM, and we’re Ogilvy.

If you’re hungry (or thirsty) for more tales of the Ad Biz As I Knew It, be sure to check out the ‘Adland Lore’ tab to the left. Or just go ahead and click on any of these:

‘The Most Fun You Can Have With Your Clothes On’, ‘General Foods, We Salute You’, ‘The Naked Boss and the Pussycat Lounge’.