‘There is nothing scarier than a teenage girl’

A spirit once haunted my house. And it wasn’t just at Halloween. An alien presence took possession of The Child when she was, oh, 14 or so, and stuck around for about three years. Three very long, very frightening years.

Before she was possessed by this alien force — let’s call it the Spirit of Teen Girlhood — The Child was a normal, happy little sprite. An inventive sort who insisted, for unexplained reasons of her own, on dressing as objects for Halloween. As the years went by, she was, among other things, a Number Two Pencil, a Bloomingdale’s Bag, and a Pre-War Building. (Check her out as a Strawberry in ‘Happy Ho-made Halloween’.) Here are a couple more:

The Child as a candle, complete with flame. And flame-colored socks 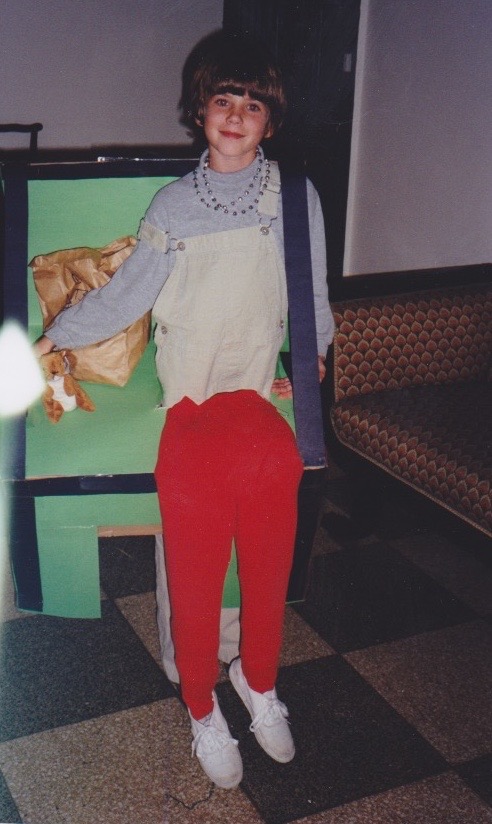 Cut a Child-sized hole in a cardboard box, drape newspaper-stuffed leggings over the front, staple on a squirrel, and you’ve got a Park Bench

Notice that in both of these shots she is smiling. While, in the picture at the top of this post, she is making that ‘okay okay, I’ll let you take a picture if you hurry up about it and get the heck out of here’ face. (Did you notice her eyes? I swear that’s not red-eye; that’s the Spirit peeking out.)

Now, don’t get me wrong. She didn’t turn into a bad person when she turned into a Teen Girl. It was more like one day someone threw a switch that caused her to immediately, and without precedent, decide her mother (that would be me) was anathema to her. (Incidentally, I just checked out the definition of anathema: ‘vehement disagreement with or dislike of something.’ Ouch.)

Seriously. During this period of bewitchment, I could do something as simple as walk by her open bedroom door and spark an interchange that would go something like this:

Child: Are you leaving the apartment dressed like that?

Me (wearing something outrageous like a dress and boots): Um, yes.

Child: Just don’t tell anyone you are my mother.

But hey. Stuff like this wasn’t her fault. Not really. I chalk it all up to Nature. (Notice I didn’t say Mother Nature. If Nature were really a Mother, she’d be a lot nicer about stuff like this.)

You see, I have this theory. Which is about toddlers and teens. See, I think toddlers ‘act out’ because their minds are ahead of their bodies. Their brains know that they can tie their own shoes. But their fingers just won’t cooperate. So the toddler gets super-frustrated, and has a tantrum. Well, teen girls have the opposite thing going on. Their bodies are ahead of their minds. They own these gorgeous womanly chassis which they just aren’t mature enough to drive. Not safely anyway. But just try telling one of them that.

Oh, and it doesn’t help matters if your Teen Girl is a whole heck of a lot taller and/or bigger than you are, either. Shaking your finger in someone’s face with a stern ‘Now, and another thing, Young Lady!’ somehow loses admonitory force when you’re bending backward and craning your neck upward.

It also didn’t help that, while The Child was changing into a woman, I was going through that Other Female Thing. The poor Dude. He was trapped in a shrieking, tear-drenched hormone sandwich. When The Child left for college we had to get her a new bedroom door; the old one was cracked from all the slamming.

So, who did I turn to for help? Well first I called my mother. Who maintained that, yes, I was pretty surly to her when I was a Teen Girl. But it didn’t get to her all that much because she had four other children in the house, and, well, she was busy.

It being a little late to solve my problem that way, I next called some of my friends. The ones with Teen Girls a little older than mine. They all assured me that the problem would solve itself. That there wasn’t really anything you could do. But that one day, poof! it would just…stop.

And guess what? That’s exactly what happened. One day I’m walking by the open door of her bedroom — well, kind of slinking, to be honest — and she’s, like, ‘Want to go to yoga class with me?’ After first looking around to see if there was someone else in the hallway, I realized that yes, she was talking to me.

So. My lips to your ears, O Moms of Teen Girls. This too shall pass.

And to you, O Child O Mine, Happy Halloween. You once were (see proof below), and always will be, a Star. Oh, and since you didn’t have four siblings, feel free to give me a call when you have your own Teen Girl. 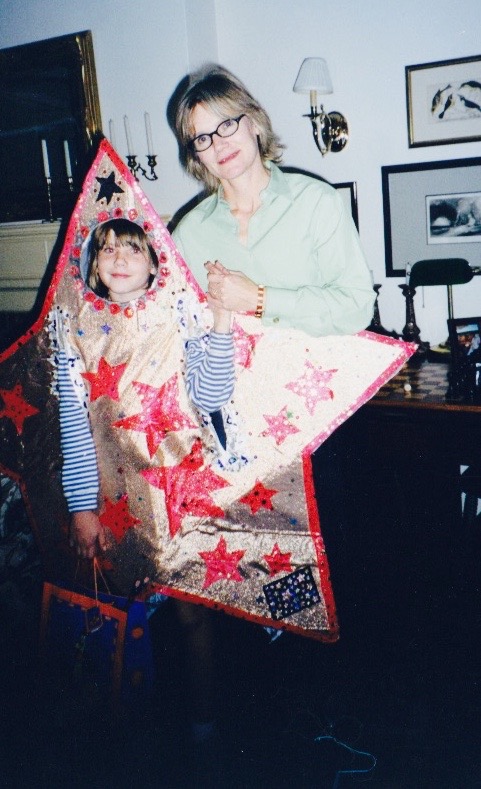 My Once and Future Star, back in the days before The Haunting