Two talented Ogilvy friends of mine came up with this great tagline for an investment firm back before investment firms all started to go belly-up. It was: ‘At Smith-Barney, we make money the old-fashioned way. We earn it.’ And let me tell you, we Ad Girls back then had to earn our money too. And I don’t mean just by writing great copy. We had to be smart enough, and deft enough, to deal with all kinds of stuff that (most of) the guys didn’t have to.

Let me give you an example. This was when I was still living in the Midwest and working at what was then the largest ad agency in Kansas City. Now, before you scoff, this was actually a pretty great job. For one thing, I worked on an account that was based in New York. Which meant that I got to go on business trips paid for by Somebody Else, and stay in that classy hotel pictured at the top of this post. It’s the St. Moritz, and it’s still there, right on (sigh) Central Park South. (I’ve heard from Colleagues Still in the Biz that now you’re not only expected to stay at a Motel 6 when on a business trip, but to share a room — sometimes with the client.)

Anyway. I’m on a business trip with about six other people (each of us in our very own hotel rooms), including the Big Boss, who is the President and Founder of the Agency. (The man’s name was on the door, so I’m leaving it out of this story.)

Mr. Smith (not his real name) was staying at an even classier hotel, the St. Regis, pictured below. As a special treat to the Team (as if an all-expenses-paid trip to New York wasn’t treat enough), Big Boss Man was taking us all to La Cote Basque for dinner. Now, let me tell you: La Cote Basque was a virtual Temple of French Cuisine, and a Very Big Deal. 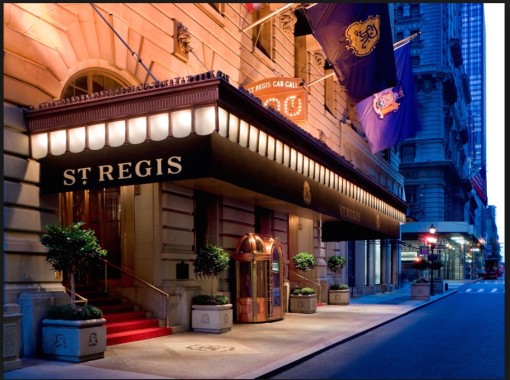 It was also located, at that time, right across the street from the St. Regis. The plan was for us all to meet there, have a drink in Mr. Smith’s suite (of course he had a suite), then walk across the street for our amazing costs-way-more-than-a-car dinner.

So I do my presentation bit in the big meeting with The Client, then spend an afternoon roaming around playing New York Tourist, before repairing to my room to get ready for the Big Night. Where there is a message telling me what time to report to Mr. Smith’s suite.

I get all spiffed up, and report as ordered to the St. Regis, where the desk clerk tells me which room, and to go on up. (For another story of me reporting to a man’s hotel and being told to ‘go on up’, see ‘The Jerk and The Dude’.)

So what did I do? Well. I quickly shifted my gaze to a point exactly between his eyes and said, ‘Oh, Mr. Smith. I must have gotten the time wrong. I’ll wait downstairs for the others. See you soon!’ And left.

The others eventually came, we went up to the suite for a drink (where Mr. Smith was wearing clothes), and went across the street for a most memorable dinner. (Though not as memorable as the naked prelude, about which nothing was ever said, ever again.)

Oh. Some good did come out of this trip. I fell in love with New York and made it my mission to get there. Which I did. You can read about how in ‘Take a letter, Miss Henry’. It’s a pretty good story, if I do say so myself.

And what’s with The Pussycat Lounge? Well. I did get to New York, but some things weren’t all that different from Kansas City, after all.

We had this client who insisted on being entertained when he came to the City on business. Which isn’t all that unusual. But, instead of insisting on La Cote Basque, or Peter Luger’s Steak House, or Hatsuhana, he wanted to go to a place called the Pussycat Lounge: 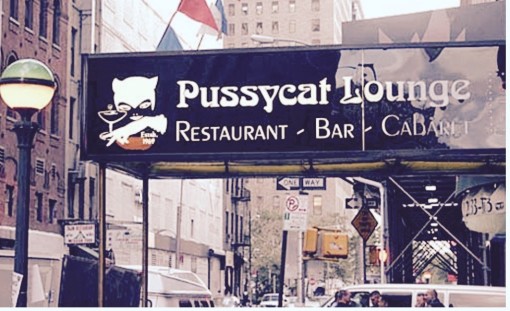 The girls who worked here had even harder jobs than mine. And fewer clothes

Ah, the delights of being an Ad Girl back then. In addition to our regular duties, we had to be diplomats. And courtiers. And sometimes even geishas. It was loads of fun, but sometimes terribly exhausting. But, hey, we survived, made great careers for ourselves, and mostly wouldn’t have had it any other way. At least we got some great stories.

Which reminds me. For more crazy tales from the Ad Biz, just click on that tab in the sidebar called Adland Lore. And have fun today, whatever you do for a living. Just be sure to answer the door with your pants on.

19 thoughts on “The naked boss and the Pussycat Lounge”