Forget Rod McKuen. It was Henry James who nailed summer. He once famously said that the two most beautiful words in the English language were ‘summer afternoon’. Go on; say them out loud. Better yet, murmur them.

‘Summer af-ter-noon‘. Mmmmmmmmm. You can practically feel that hammock swaying.

Now you’ve already heard me go on about the tastes of summer — I’ve waxed ravenously poetic about such seasonal delights as watermelon and corn and berries-somebody-else-picks and glorified rice and even (yum!) Jello Cake.

But I haven’t talked much about summer sounds. You know the ones I mean; sounds that really say summer. Fireworks. The ice-cream truck. And, for me anyway, that fwap fwap fwap sound that happens when you clip playing cards onto your bike spokes with clothespins and ride home from the Carlyle Municipal Pool gnawing on a frozen Milky Way.

Oh, and let us not forget the metallic drip/clang of the window air conditioner or the whine of the mosquito (followed by the inevitable ‘damn!’/slap). So summery.

Just this week I noticed that the cicadas have cranked up.  That cicada chirp (I guess you’d call it a ‘chirp’; if in doubt, you can listen to it here) is one heck of a powerful memory jolt:

See? Just like one of Proust’s madeleines. Only louder.

Speaking of powerful memory jolts, my Middle Younger Brother Roger posted a movie last week that took me waaaay back. To a summer some 20 years ago. When I watched it, I was transported back to a time when The Child was just a tyke. And it wasn’t just her little-girl looks. It was that voice. I had honestly forgotten how much she — and her cousin Nat too — sounded like baby ducks. Cartoon baby ducks. Here. Go on and take a listen. It’s a really short clip. They talk (er, squeak) a bit about moles (the rodent kind) before they get to the wineberries.

The non-baby-duck, non-helium-breathing voice you heard was, of course, Middle Younger Brother Roger (Uncle Rog, to them).

Now, wineberries. They don’t make any noise themselves, but they do stimulate some pretty appreciative mmmmm-ing. They taste rather like raspberries, but not exactly. You may never have heard of them, because, like many lovely things — ripe tomatoes, vinho verde, The Dude — they don’t travel well. (Yes, I mention The Dude. Who likes to be in other places, just hates the getting there parts.) 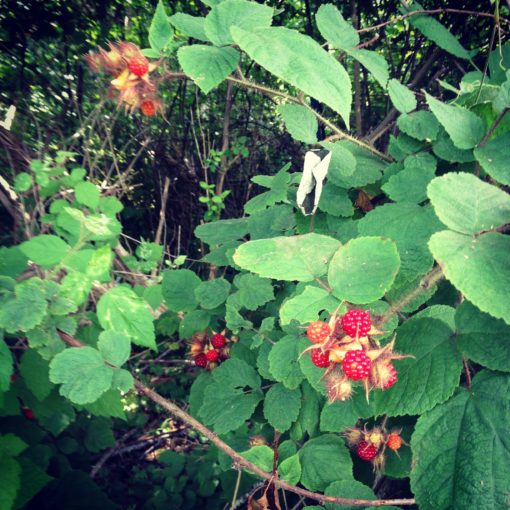 Maybe, just maybe, it’s because you can’t buy them that makes wineberries so special. Whatever it is, around here they sure are. The Dude was on the phone to The Child just yesterday and mentioned that ‘the wineberries are getting ripe’. Which means I may need to make a ferry run soon.

Well. I seem to have strayed a bit from my ‘summer sounds’ theme. Here I am, talking about taste again. So sue me. Before I leave you to go hunt down some wineberries before The Dude’s sister comes and scarfs them all, here is another berry blast from the past: 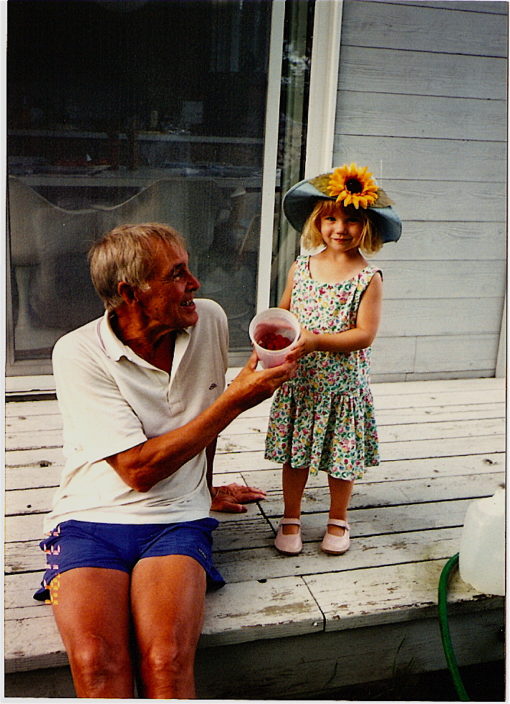 Now gather some berries, gobble some corn, maybe whip up a Jello Cake. Whatever you do, enjoy the rest of your July. The next summery sound you’ll hear will be me — rapturously slurping a ripe August tomato.

44 thoughts on “The Days of Wineberries and Roses”