‘The Motorcycle Diaries Part II: Getting the goldarned license’

I was going to write about little girls and summer afternoons and wineberries, but it made me feel way too gosh-what-happened-how-could-they-be-grown-up-already.

So instead I’m going to (finally) finish the story about me and my Vespa. You Faithful Readers out there may recall that, instead of flowers or candy or piece of jewelry, I got gifted with a scooter for Mother’s Day one year.

Now, a Vespa is a great Gift Idea. For one thing, it lasts a lot longer than flowers or candy. (Notice I don’t compare it to jewelry.) But there are certain strings attached. For one thing, you can’t just hop on and make like Audrey Hepburn in ‘Roman Holiday’.

Nope. The mean old State of New York makes you get a motorcycle license. Even if the ‘motorcycle’ is a cute little powder-blue Vespa. They also make you wear a helmet. Which might have been a deal-breaker for Audrey. 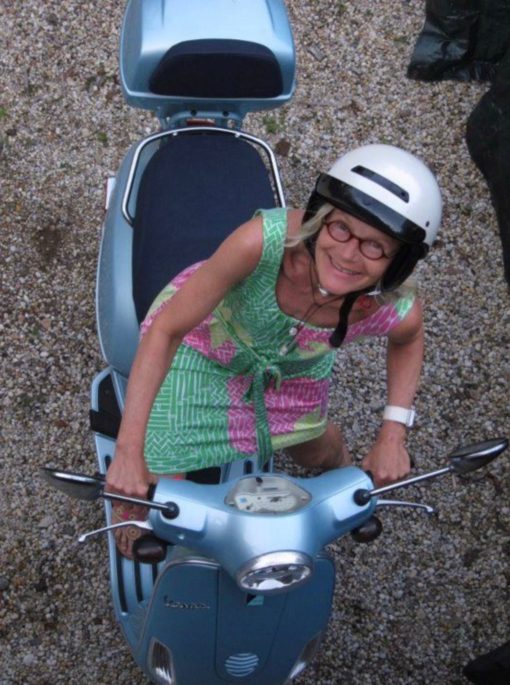 Me, appropriately helmeted on my cute little Vespa. Yup, I have my license. No doubt tucked into the pocket of my Lilly

So. I got myself down to the DMV, met the gentleman who suggested I invest in leather (hilarious details can be found by reading ‘The Motorcycle Diaries Part 1’), and took the written test for my motorcycle license.

Note: This test was (and still is, I assume) outrageously easy to pass. It’s all multiple choice, and has questions like this one:

A car is following your motorcycle too closely. Do you:

B. Make threatening gestures at the driver.

C. Signal, then pull over to allow the driver to pass.

I kid you not. It’s that easy. I honestly fear for those who fail to pass. And there always are a hapless few. (You’ll see why I say ‘always are’ in just a sec.)

But, you see, the written test just gets you your learner’s permit. In order to get your motorcycle license, you also need to take a road test. I will spare you the details, but if you live in New York City, this is practically impossible to do. (You’re not allowed to drive your motorcycle to the test unaccompanied, for one thing.)

But I did discover a loophole. Good ole New York State will let you keep renewing your permit — as long as you don’t mind getting your leather-clad butt down to the DMV every year and retaking Mr. Written Test.

Which I did. And kept doing. But after about five years I decided I’d had enough. It was time to get my goldarned license, already. Even though I’d kind of miss answering questions like this one:

You’ve had two beers at a party. When is it safe to drive home on your motorcycle?

A. After two hours.

B. Right away. It’s only a couple of beers.

C. The next day. In the meantime, ask someone to give you a ride home.

I mean, duh. But like I said, there always are a pitiful few who do not pass this test. They are out there, people, in your world. But at least they are not driving motorcycles. (I hope.)

Well. Did I mention that the course took place up in The Bronx? In a trailer parked in an abandoned lot fenced with barbed wire? You should have seen my face when I got there — waaaay too early, of course.

Matters got even more interesting when my fellow students started arriving. I felt like I was at a casting call for ‘West Side Story’. Oh, there were a couple of girls, one of whom was a dead (er ‘live’) ringer for Janice Joplin.

Our instructor, Antonio, got the ball rolling by having us introduce ourselves and say why we were taking the course. Needless to say I was the only one of the twelve who piped up with ‘I got my Vespa for Mother’s Day and I’m tired of renewing my permit’.

But nothing breaks down barriers like two days of intensive motorcycle training. And it did turn out to be ‘motorcycle’ training. About halfway through Day One good ole Antonio took me aside and told me that I was the only one in the class who signed up for taking lessons on a scooter. Oh, he could get a scooter for me, but he thought I’d feel less odd-man-out (as if that were possible) if I took the course on a motorcycle like everybody else. 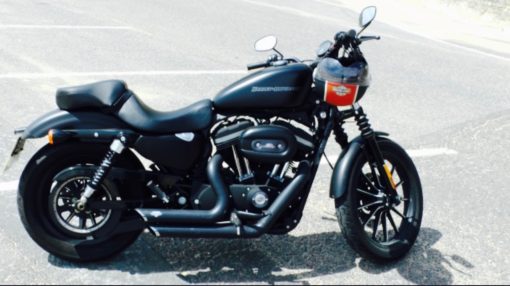 You’ll just have to imagine me riding this. No photographic evidence exists. Thank god

And so I did. I learned to shift and do a controlled skid and drive over railroad ties and execute a (not very good but still) Figure 8. And those barriers I mentioned breaking down? Well. By the second day it was all ‘Go, Pedro!’ and ‘You can do it, Ali!’ I was even walking to the subway with these guys, though we did take our trains home in opposite directions.

And after two days of this, what did I have to show for it? 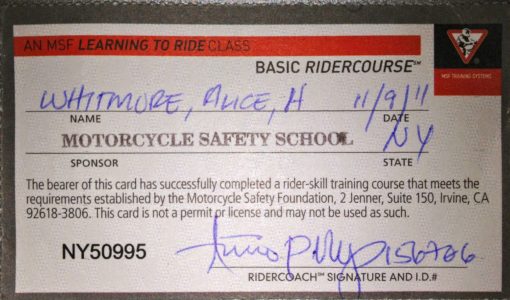 My prize, signed by Antonio himself: a certificate showing that I’d passed the course (!)

Which makes me pretty darned happy. As you can see: 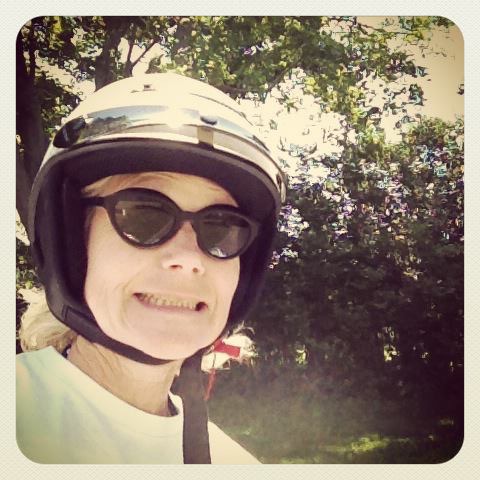 Happy Vespa rider me, on a ‘Grand Day Out’ 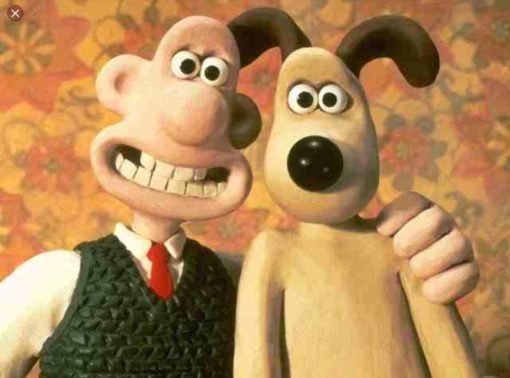 Notice the resemblance to a certain claymation character?

That’s it. Gonna go saddle up. It’s going to be another hot one today. Stay cool, even if you’re Vespa-less. I’ll be back next week, possibly with that tale of wineberries and little girls.