‘Aha! So that explains it’

‘Incest’, eh? You might be thinking that’s a frisky topic for Lutheranliar. But I figure now is a perfect time to get this story out of my system, since almost everybody’s away from their computers doing their Christmas shopping. And all the other people not away from their computers are probably doing their Christmas shopping too.

So, hah. I’m thinking the chances of ruining my social standing and/or becoming shunned by polite society are fairly slim since nobody’s going to read it anyway. So, here’s the story.

The Henrys — my Dad’s side of the family — are a Big Bunch. My Dad was one of eight kids, and they each had a batch of their own. I can’t recall just how many Henry Cousins I have. But I do know that they got together as often as possible. Here’s a shot taken on one such (early) occasion: 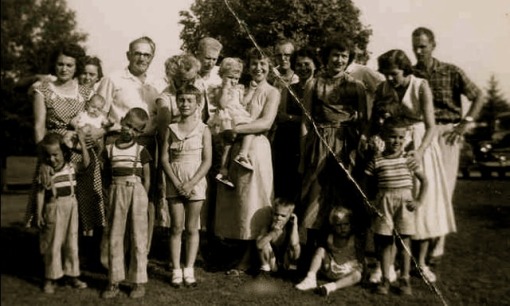 Those Henrys! They may not have had much money, but they had fun, I can tell you that. I can remember gathering around the ‘heat registers’ (basically, decorative metal grille-like openings in the upstairs floors to allow ‘heat’ from the downstairs to sort of drift up to ‘warm’ the icy second-floor bedrooms) to listen to the Grownups talk and laugh while they played games around the kitchen table. Poker was very popular. But not just any poker. They had scads of variants on the theme. The nuttiest was probably Indian Poker, where you put a card up against your forehead for everyone else to see but you. Here’s a typical scene, though I couldn’t find an ‘Indian’ shot: 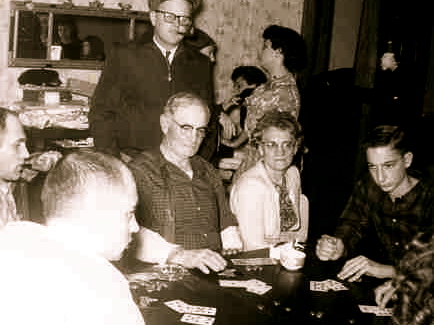 Grampa Henry (that’s Gramma H next to him), ready to bet the farm. Well, not literally. Those are pennies on the table. And that’s my Dad, in profile, stage extreme left.

And when we didn’t have our ears cocked toward the ‘registers’? I could go on and on with tales of the mischief we Henry Kids would get up to while the Grownup Henrys were occupied. There was the Time We Called a Cousin on the Phone Extension and Pretended we Were Santa and that the Cousin was Very Bad and Would Get No Presents, and the Time We Sent Another Cousin into the Corn Field and Told Him Raccoons Would Eat Him. But I’m saving those. You know, for other posts.

But, as we know only too well, time passes. And, eventually, the Grandparents passed on to the great Poker Game in the Sky. But those Henry Kids, all eight of them, loved getting together so much that they didn’t stop. They staged reunions. Big reunions. With activities. And souvenirs. Once, the souvenir was a wooden key ring in the shape of the State of Illinois, with ‘Henry Reunion’ printed on it, plus the date. Another time (I guess money was tight that year), it was a pebble, similarly inscribed, but with a Sharpie.

And there were always tee-shirts. In fact, we were divided into ‘clans’ by the reigning senior Henry Siblings, and issued color-coded shirts. I still have my green one from this particular year (even though I did not, in fact, attend the requisite companion reunion, much to my dad’s chagrin): 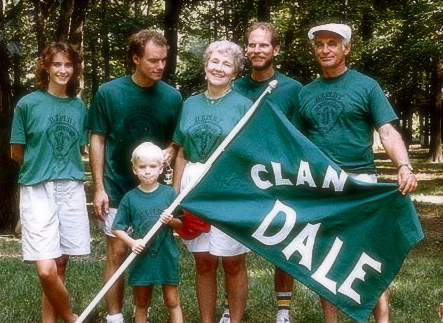 These reunions could get rowdy, as well as fun. One time (at a reunion I did in fact attend), a bunch of us ‘young people’ were talking and laughing, I guess a bit too loud, because my Dad and a couple of his Henry Bros yelled ‘Quiet! We’re toasting the Dead!’ Which, of course, sent us into gales of inappropriate laughter. And only made things worse.

But. Let’s turn to 1992. When the Henry Shindig was held in Breckenridge, Colorado. (I am cheating, and reading this from my mug. Because I did not go to this one, either.) But I did get said commemorative mug. And I’m not the only one. There are dozens of these mugs, perhaps hundreds. They live in the kitchen cabinets of Henry Households throughout the land — perhaps throughout the world, we Henrys being a rather procreative clan.

So, anyway, here’s what happened with one of the mugs (not mine).

A Close Relation who shall remain nameless married a very sweet girl from a Good Family. Now, it’s not that my family is not a ‘good’ one, it’s just that hers was a ‘Good’ one. Mayflower stuff. (Or maybe they just thought so. Whatever.) All I know for sure is that they thought that a bunch of people who came from a farm with no running water or indoor plumbing and who played poker around the kitchen table while the kids ran wild in the corn fields were, um, somehow perhaps ‘beneath’ them. I guess that would sum it up.

So, it’s Christmas. And this Close Relation’s in-laws are visiting. The mother-in-law (the one from the Good Family) is invited to help herself to one of the mugs in the kitchen cabinet for her morning coffee. Which was sort of disconcerting for her right off the bat. Not the ‘helping herself’ part. I think it had to do with drinking coffee from a mug.

She examines the many mugs on offer and selects the 1992 Henry Reunion Mug. Then she takes a really good look at it. Sees the eight Henry Sibs listed on the right. The Henry Grandparents, Leo and Cecelia next to them. So far, so good.

But then she comes to the two sets of Great-Grandparents, smack-dab in the middle of the mug. Right on top? ‘Joseph Henry’ and ‘Sarah Henry’.

She says (to my Close Relation): ‘Oh! I see your great-grandparents had the same last name. What a coincidence!’

To which my Close Relation replied: ‘Oh. No coincidence. They were cousins.’

So, we Henrys (at least ‘my’ batch, Clan Dale) have called this particular coffee-holding receptacle ‘The Incest Mug’ ever since. It’s actually my favorite. Which should come as no surprise, Dear Non-Christmas-Shopping (at least not right now) Faithful Reader. Thank you for sticking with me, through thick and thin and weird bloodlines.

For more amazing adventures of the Henrys, see ‘That’s my Bob’, ‘Dad Eggs and Ham’, and, for a change of pace, check out an equally strange-but-true tale about my mother, who was not an ‘original’ Henry, but still had some pretty funny stuff happen to her, especially in ‘My Mom, the Party Girl’. And for more stuff I couldn’t possibly have made up, check the tab on the side of the home page that says ‘Couldn’t Make This Up’.

Catch you next week. Meanwhile, consider these stories your little escape from Holiday Madness. Though there is a little madness here too.

22 thoughts on “The Incest Mug”