Even more of a shock to me than Chuck Berry’s recent demise was to open the Times and see an obit for one of the Really Cute Girls who used to dance in bikinis on Laugh In.

Remembering Chelsea Brown — and Goldie Hawn and Judy Carne — ‘go-go’ dancing their little hearts out got me to thinking about how much fun we used to have watching TV back in those days.

See, TV back then didn’t mean streaming a show on your iPad with your earphones in. It meant sprawling on the living-room floor, consuming huge cereal bowls of ice cream (usually vanilla, but sometimes a flavor called ‘Neapolitan’; the green stripes being my favorite) or sharing a giant washtub of popcorn (Littlest Brother Doug was the designated Popcorn Chef; he popped it in a battered aluminum pot on the stovetop, shaking it energetically and listening carefully for the last ‘pops’ so it didn’t burn). We watched shows like Bonanza (“Little Joe!”) and The Man From U.N.C.L.E. (Illya Kuryakin!) and The Waltons (“Goodnight, John-Boy!”). And, like I say, we watched them together. That big ole TV in the living room was sort of like a hearth. If you look at the photo at the top of this post carefully, which was taken during present-opening on my first Christmas home from college, you’ll see the living-room TV in the background. It has family photos on top of it, even a couple of lit candles, signifying its status as family focal point.

Now, don’t get me wrong. We Henry kids did play outside and do our homework and our chores and, no, we did not fry our brains with Too Much TV. All of us grew up to have pretty good brains, actually. But I guess the TV was about as ubiquitous back then as the Internet is today. Just a tad more communal.

Speaking of chores, when I got home from school one of my jobs was to take a couple of damp pieces of clothing out of this plastic bag that was kept in the fridge and iron them. (Permanent-Press clothing was way in the future, and our family of seven ran through a lot of laundry. The damp ‘ironing’ was kept in the fridge so it wouldn’t mildew.) This chore was slightly less onerous when done in front of the TV. For years the ironing board was more or less a permanent fixture in the living room, taken down when Company came over, of course. Yup. There it is. The ironing board, stage left. (I guess we weren’t expecting company)

We kids were also given TV-friendly chores like shelling pecans. We’d spread newspapers over the carpet, tune in something like American Bandstand, or, if my mother wasn’t around, The Three Stooges (she hated The Three Stooges, thinking it inspired my brothers to emulate their ‘nyuk-nyuk’ing antics; she was right), and shell away. We had a pecan tree growing in the strip of ground between the sidewalk and the street. One of our neighbors thought this meant he could come over and gather the pecans since the Town owned that land, and consequently, the pecan tree. My parents said if that was the case, the neighbor could jolly well come over and mow the grass on that land too.

Another show we weren’t supposed to watch was The Twilight Zone. Not only was it really scary, and deemed inappropriate for kids, but it was on after our bedtime. But sometimes when I was babysitting I would watch it. Until I scared myself silly watching that episode where the gremlin is on the airplane wing. I couldn’t open my bedroom curtains for years, thinking if I did a gremlin would grin in at me.

Anyway. Back to growing up with TV. I remember that the TV was sort of always on. And not just at our house. Christmas at my Gramma’s meant watching not just Lawrence Welk, my Gramma Peterson’s favorite show (The Champagne Music Makers! Norma Zimmer!), but also various and sundry Christmas  specials. Though I do love opera now, I could never get into Amahl and the Night Visitors. Could anyone? 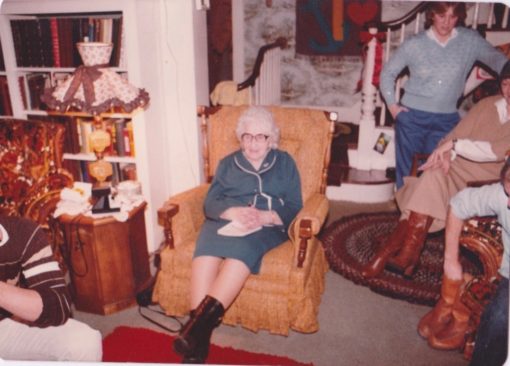 The scene at Gramma P’s at Christmastime. Gramma’s chair is pointed toward Lawrence Welk

As the years went on, and TVs got cheaper, we obtained more and more of them. I remember going home for visits in the 70s and 80s (having moved out by then) and finding new TVs in the oddest places. Not just in the living room and ‘den’, but in my parent’s bedroom. It had a timer so it could turn itself off if they fell asleep during Johnny Carson (Carnac!). By the 90s, there was even one on the porch. 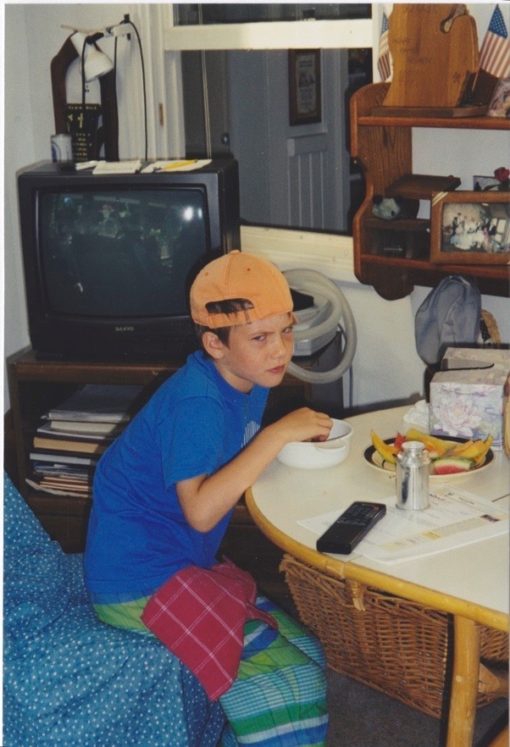 The Child, looking none too pleased at being photographed, on the porch at my parent’s. Note TV in background

These TVs were usually on, even in empty rooms. I would sometimes go through the house switching them off, and then my father would shout “I was watching that!” He would also shout this when he was prone on the couch, snoring, and you tried to change the channel from something like golf. (There’s more on Dad and couches in ‘Let Sleeping Dads Lie’, if you’re so — hah hah — inclined.)

Now, comparing notes with The Dude for this piece, I discovered that there actually were families that did not have the TV on all the time. Like his. He told me that he and his siblings were allowed only one hour of TV — a week. ‘His’ shows were The Man From U.N.C.L.E. (something in common!) and T.H.E. Cat (which was not one of our ‘regulars’, but actually looks like it was pretty good).

In fact, The Dude’s was such a not-TV-watching family that when we named The Child, Dad of Dude thought we had invented the name ‘Samantha’. He obviously had not watched — or even heard of — the show Bewitched.

The only thing I could think to say to that?