‘Living in harmony with the Piano Man’

Even the most wonderfully wacky honeymoon — spent driving around Portugal and Spain checking out caves (well, make that one cave) and mooching off Malcolm Forbes in Morocco — has to end sometime. And then you have to get back to Real Life.

Which The Dude and I did. We lived, as we do now, in an apartment here in New York City. Not the same apartment as now, though. This one was on the ground floor of the building right next door, which is an oddity I won’t get into right now, for lack of space (mine) and patience (yours).

Anyway. I mention the Ground Floor Thing because it meant that any pedestrian striding by on his or her way to work or class (hospital down the street, school across it) had a clear view through our windows of anything we happened to be doing. I remember getting our living room ready for moving in — this was before our blinds were installed — and feeling, you know, watched. I glanced up to see a whole Peanut Gallery checking out my floor-polishing technique. So we pretty much had to keep those blinds shut. Which made the apartment feel rather like that cave we visited on our honeymoon. 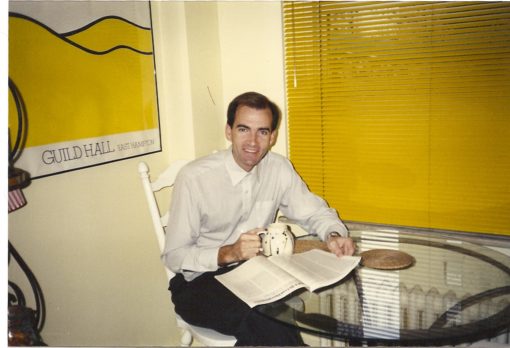 The Dude enjoys a mug of decaf and a medical journal. That’s about as ‘open’ as our kitchen blinds could get. The ones in the living room and bedroom were shut even tighter

Like many young couples, we had furnished this apartment with an array of cast-offs, thrift-shop finds, and stuff ‘inherited’ from parents or even (in my case) Old Beaux. (For a funny story about the furniture in this apartment and what happened to some of it, see ‘The Truly Ugly Chair’.) 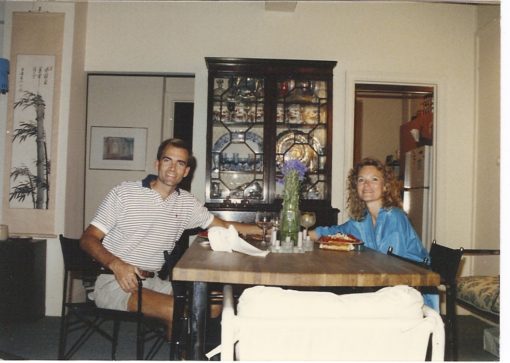 Fine dining chez Whitmore. Bedroom behind The Dude, kitchen behind me. Table made from a plank sets off Mom-of-Dude donated china cabinet

It’s hard to fully appreciate this from the few pictures I could find, but this apartment was crowded. It sounds roomy enough; it had a bathroom and a kitchen and even a bedroom. Some apartments in New York are called ‘studios’, which is a fancy way of saying ‘no bedroom’. Come to think of it, Mary Richards had to put her bed away in her couch every morning and she didn’t even live in New York City. So, hey, even crowded we had it better than Mary.

And, of course, this apartment did have a living room — one room that served many purposes and held many things. True, we didn’t have to jam a bed in there, but we did have sectional couches from a garage sale and a giant wedding-gift television and our dining area stuff and The Dude’s home office — complete with desk, big ole rolling desk chair and huge metal filing cabinet. I remember once when we were discussing whether or not to have a child asking where the heck we would put said child and The Dude answering “we could put the baby where the TV is.” Which, eventually, we did.

Oh, and we had a piano in there. Not just any piano. A baby grand piano. A Steinway. It’s quite wonderful (we still have it, in fact), but it does take up quite a bit of space. Space that we didn’t have a whole lot of back then. 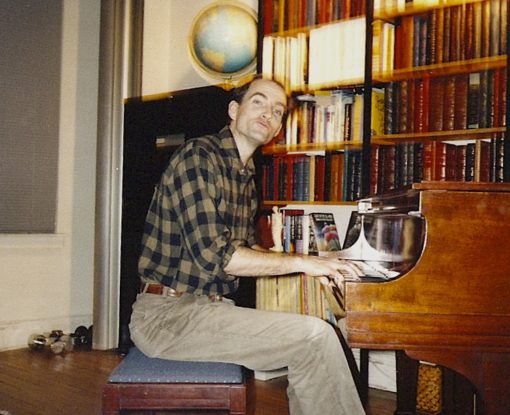 Wayne doing his Piano Thing. Note humongous filing cabinet next to firmly-shut gray blinds, plus weights on the floor. (This room was also the gym)

One little aside before I get on with my amusing crowded-with-furniture tale. Of course I realized before we got married that The Dude enjoyed playing the piano. After all, we had (gasp) lived together before we got married. (I know. You are shocked, shocked!) But somehow I guess it didn’t really sink in that not only would I be hearing someone play the piano every day for the rest of my life, but that I would be hearing him play the same three pieces: the Chopin Thing, the Ragtime Thing, and Some Jazz Thing I Can’t Remember The Name Of.

Oh well. Marriage is based on compromise. If we could sort out which way the toilet paper unrolls (we settled for ‘over the front’), we could certainly sort out when ‘Maple Leaf Rag’ got played (usually when I was making dinner). 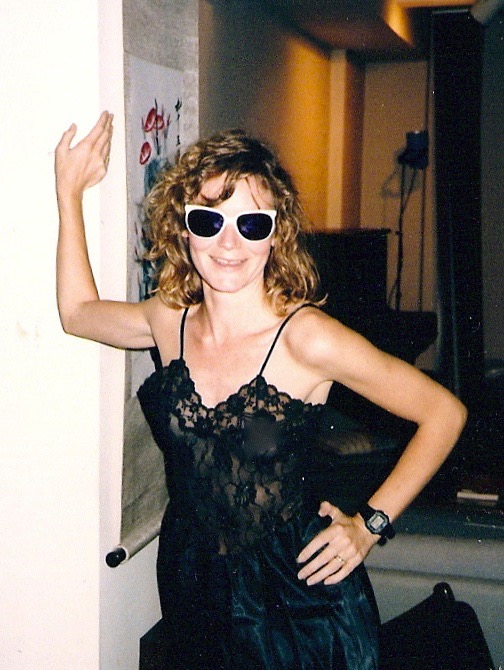 Me, modeling birthday presents in a desperate attempt to distract the piano player

So. Anyway. Long story sort of short, we inherited another piano. It was, in fact, the upright that The Dude is playing in the picture at the top of this post. Now The Dude had not formed any particular emotional bond with this piano like he had with the Steinway. And, more importantly — to me anyway — we didn’t have room for it, so he had, quite wisely, decided to sell it. But somehow he never got around to doing so, and, then, speaking of selling, we found out that his childhood home, where the piano ‘lived’, was being sold. Which meant the piano had to be delivered — to our crowded apartment.

The guys show up on the appointed day, piano in tow. I hand them a check for the delivery fee. “We don’t take checks, Lady”, the burly one says. “Fine. Take the piano back, ” I say. I start to shut the door on them — and the piano — when they say they need to call their boss. I hand them the phone, there’s a heated conversation, then they hand the phone to me. “He wants to talk to you.” “We don’t take checks, Lady” he says. “I know. But a check is all I have. Tell your men to take the piano back.”

Well, it didn’t work. They took the check. And left the piano. But I must admit I laughed out loud when they asked me where I wanted them to put it.