‘Unless, of course, they come with a chocolate bunny’

That quote up top is from Thoreau. I don’t know much about little Henry David’s family or what they did for Easter, but I’m thinking he may have felt a tad better about new-clothes-requiring occasions if he’d had a nice mommy who sewed him a sport coat. Not to mention a Bunny to leave him an Easter basket. Younger Brothers Scott and Roger and I show off our Easter finery, which was most likely made by our mother. No, that’s not the Easter Bunny. That’s Sandy, the Dog of Our Youth

Last weekend was Easter. It was also my Youngest Brother Doug’s birthday. Since he is waaaay younger than me, and I wasn’t around for many of his Easters, I don’t have a photo of him lined up with the rest of us wearing Easter duds. But I do have this shot of him in his (almost) birthday suit. 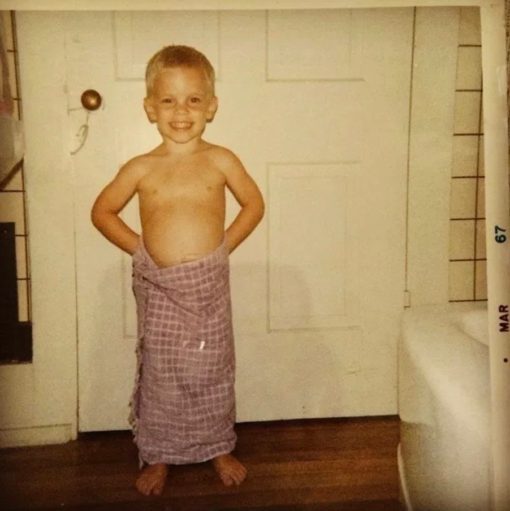 Doug, looking clean and shiny and very proud of himself indeed. Maybe getting ready to dress himself for Easter. (Note string tied to bathroom door as an escape mechanism in case the latch caught)

Easter was a big deal when I was growing up. Not as big a deal as Christmas, of course. But when we were kids, any occasion when adults insisted that Jolly Old Elves or Big Bunnies were going to sneak into the house and leave you gifts was pretty darned exciting. The Tooth Fairy was cool, too, what with the money left under your pillow and all. But nobody, as far as I know, has made a chocolate effigy of the Tooth Fairy. Maybe because of the tooth thing. But probably just because nobody knows what the Tooth Fairy looks like, except kind of like your dad, in pajamas. 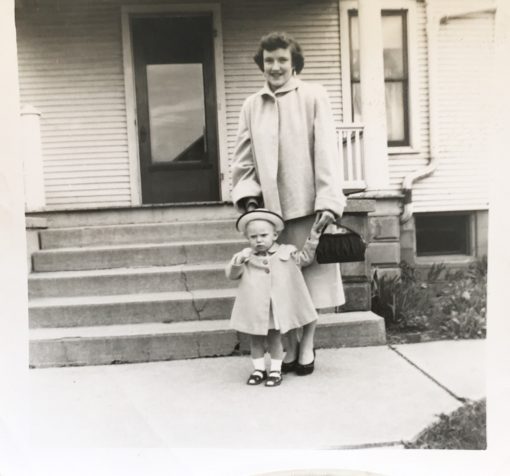 An early Easter. When the crowd of dressed-up Henry Kids consisted of, um, me. Good thing I was too young for Dad’s Tooth Fairy duty; he was away, doing other duty off in Korea

And any occasion that required new clothes was also a big deal. Easter was a biggie. Mom usually made our outfits as well as her own. She famously made my brothers sports coats — and matched the plaids. Which, if you sew, you know is very hard to do. I made my own clothes too, when I got big enough for my foot to reach the treadle. Where we grew up, sewing kind of came with the territory. Especially if you wanted to wear anything, well, trendy. My HS BF Norma sewed a ‘granny dress’ but she got in trouble wearing it to school because it didn’t meet the dress code — it was too long. 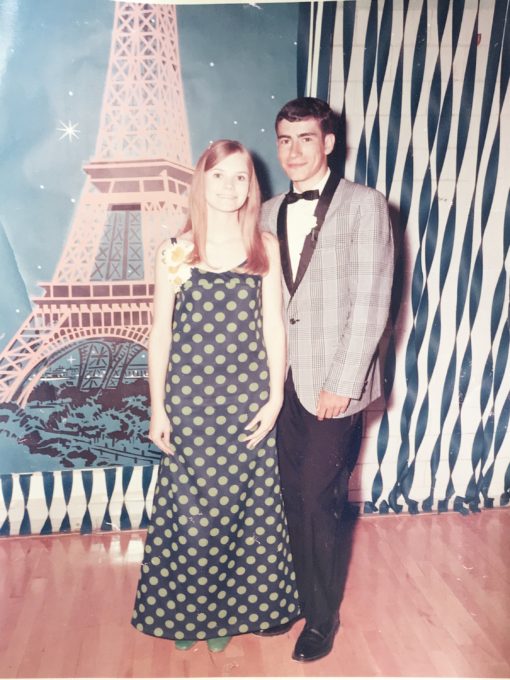 Nope, it’s not Paris. It’s me at another new-clothes-requiring occasion: Prom. I’m with High-School Hunk Brad, wearing a dress I made myself. Thank goodness it had dots, not plaids

But back to Easter. On Easter morning we’d wake up to find an Easter Basket by our beds. It didn’t matter how old we were; this happened every Easter. Even when I was a Hulking Proto-Adult home from college on Spring Break, I would wake on Easter morning to find an Easter Basket by my bed. And I bet if I’d been back home for Easter this year I would have found one there too.

There were little foil-wrapped chocolate eggs in these baskets, plus a big old chocolate bunny, but no dyed eggs. The dyed eggs were for hiding. They were hard-boiled eggs dyed in the kitchen with our Mom, using food coloring (these being the days before those dying kits with dissolving pellets, and way before the advent of those horrible pull-apart plastic eggs). We used to draw on our eggs with white crayon — our version of batik — the crayon wax would keep the dye from ‘sticking’ to the designs, and we could create some pretty nifty effects.

Our Mom — or in later years, the Big Kids — would hide these eggs. I have to confess that I much preferred hiding to finding. It was a blast to think of clever places to put the eggs. I remember one in the crook of a tree that remained undiscovered for weeks. (Our family liked to put things in crooks of trees; my Dad once put the ‘portable phone’ — remember those? — in a tree crook, and no one found it for months.) Besides enjoying the hiding, it was also super fun to traipse around on Easter morning behind the Little Kids going ‘you’re getting warmer…cooler…warmer again! You’re hot! very hot!’ while they searched.

And what did we do with these eggs? Well, we didn’t eat them. Eating was for the chocolate eggs. And the big ole bunny. Our family was divided between the eat-the-bunny-right-now faction (my brothers) and the save-some-bunny-for-later group (pretty much only me). As a ‘saver’, I would nibble on, say, one chocolate ear, then hide the rest. Of course, my smarty-pants brothers knew where to look and would eat my bunny as well as theirs.

As years went by, I got better at foiling them, though. I once hid a big pinwheel lollypop I got at the Clinton County Fair so well that I forgot all about it. Till I heard scratching and squeaking coming from a dresser drawer where a family of mice had established a sort of rodent condo — with my sweaters as their bed and the lollypop as their pantry.

Anyway, about those dyed eggs. Even if we hadn’t had the chocolate eggs to distract our taste buds, we kids weren’t overly fond (if at all) of hard-boiled ones. Especially dyed hard-boiled eggs. If you’ve ever shucked yourself a home-colored HB egg, you’ll know that the dye tends to seep into the egg itself, and a blue-tinged egg can be sort of a deal-breaker when you’re, say, seven. Even adults find purple egg salad a tad off-putting. So, as the Little Kids found the eggs, they’d slip them to our Dad, who would rouse himself from his supine-on-the-couch position to peel them and pop them whole, Cool Hand Luke-style, into his mouth.

Oh, when it rained, we didn’t cancel the hunt; we just hid the eggs in the house. One year, about a week after Easter there was this horrible smell in the living room. Turns out one of the eggs had been hidden too well, and was still buried beneath a couch cushion. We didn’t give that one to Dad.

Jump ahead to Easter with The Child. Even though we are not what you’d call ‘religious’, we did get a kick out of dressing up and going to church with Aunt Eleanor. That’s because Aunt E went to the Methodist Church, where they sang awesome Easter hymns. Really resoundingly good ones, like that one that goes ‘Christ the Lord is risen to-daaaay…ha ha ha ha HAH lay-eh ooo ooo yah!’ We would drive home from the service with the sunroof open ‘hallelujah’ing our hearts (and lungs) out. 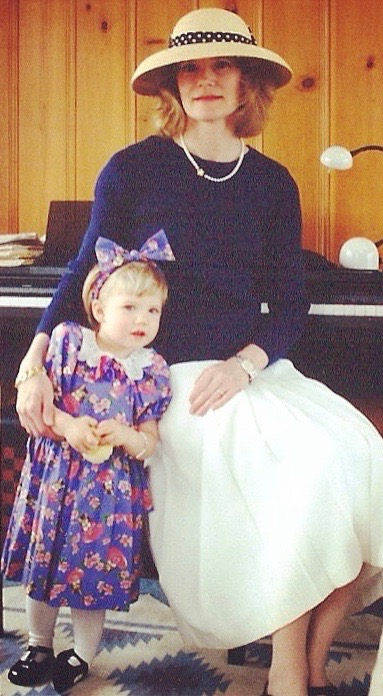 Ready for some Easter-hymn bellowing at Aunt Eleanor’s church, headgear and all. I’m ashamed to admit I did not make The Child’s dress, though I did knit the sweater she’s wearing in that shot at the top with the giant chocolate bunny

This post is getting about as long as a Lutheran hymn (six or seven verses, all sung in a mournful minor key, even the joyous Easter ones), so I’ll wrap this up with another cute Mom-and-Child Easter photo. I didn’t make The Child’s dress. Like the one in the picture above, The Child’s Doting Aunt Linda bought it for her. And no, I did not make my suit. Don’t tell the Easter Bunny. 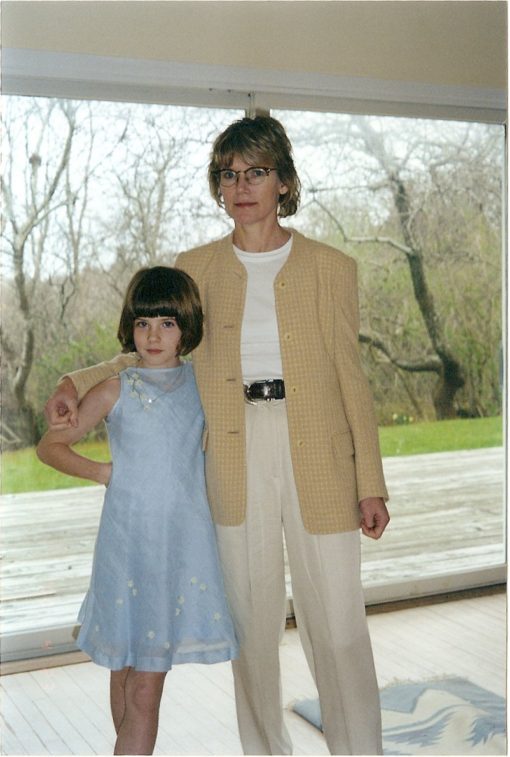 The Easter Tradition continues, sans hats. But definitely with Easter baskets (not shown)

7 thoughts on ““Beware of all enterprises that require new clothes””