Get your mother runnin’ (alongside a Honda 125)

Yes, it’s called ‘Motorcycle Diaries’ (plural) because I really do have stories (plural) involving motorcycles. Remember the one about Elvis flirting with the five-year-old me while revving a white Harley? (Elvis being the one doing the revving, not the five-year-old me.)

It’s a rather hair-raising story, and has to do with my Very First Motorcycle Experience. (Not counting the time in high school when my date Gary Beer — are you out there, Gary? — came zooming up my parents’ driveway to take me to the movies and my Mom — who used to be a nurse and called motorcycles ‘donor cycles’ — said there was ‘no way a daughter of hers was going anywhere on a motorcycle’, so we had to leave the bike jolly well in the driveway and walk to the Ritz Theatre to see ‘2001: A Space Odyssey’.)

No my very first Motorcycle Experience involving actual Motorcycle Riding was when my Brother Scott and I made the trip from Portland, Oregon, to Astoria, Same State, on a very small Honda. Roger thought it was a 1970 Honda 150; Scott just let me know it was a Honda CL125. Whatever it was, it was small.

(Scott was driving; I was ‘riding pillion’. That’s motorcycle lingo for holding on to the driver for dear life.)

Well, this bike was so small that when we went up a hill (and there were quite a few, the Oregon Coast Range rising up along our route)…well, when we chugged up an incline, I had to hop off that Honda and run alongside. 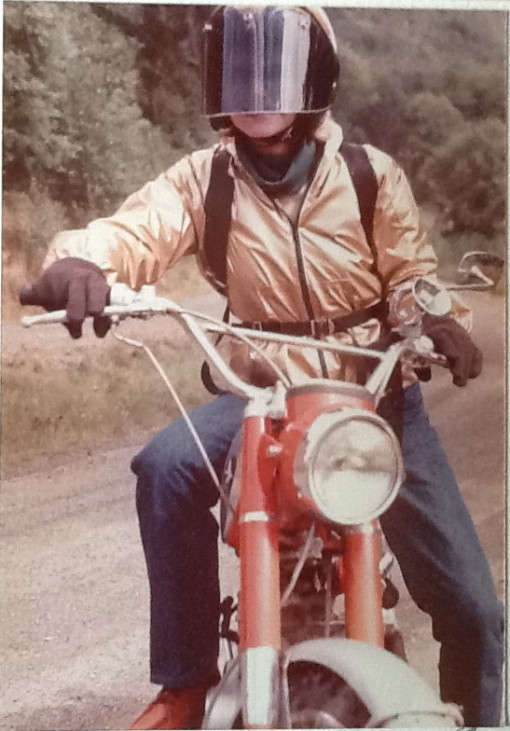 No, I did not actually get to drive this snappy Honda (which we’re thinking was a 1970, and about 125cc), not being licensed (or even ‘permitted’) at the time

After a few hours of this, we were not only exhausted (well, I was), it was starting to get dark. And we really didn’t want to ride this bike (or jog alongside it) at night. So we decided to stop at a motel. This proved a tad awkward, since my brother is a boy, and I am not. (These were rather unenlightened times.) We were in fact both legally Henrys at the time, but we still got some weird looks from the Motel Guy. And some even weirder looks when we wheeled the bike right into the room with us. (Not that it was so valuable, but that Honda was so small, we were afraid it would get spirited away in the back of some pickup or something during the night. And we really did not want to jog all the way to the Oregon Coast.)

Next morning we were on our merry way on the (almost literally) Last Leg of our journey. (This is the part where I almost didn’t get to mail the rubber chicken, move to New York, meet the Dude, have The Child, and become a Person Who Can Celebrate Mother’s Day.)

We were on this narrow logging road, following a huge truck carrying a load of even huger tires (piled rather willy-nilly, unsecured, in the back). The truck hits a bump, and one of those tires detaches itself from the pile and comes winging our way.

It rose slowly, inscribing a large whistling arc, on a trajectory that, in an alternate universe, would have bounced on top of that teensy Honda and squashed it like a motorized bug (I leave it to your imagination what would have happened to us).

But, it was not to be. I am here, writing this story and anticipating a very nice Mother’s Day bird-watching in Cape May because, instead of obliterating us and wiping out Future Aaron, Future Joe, and The Future Child, that tire bounced directly in front of the Honda’s front tire, then sailed over our heads. So close that, if we hadn’t been wearing helmets, it would have ruffled the hair on our heads.

Scott and I were so shaken that we had to pull over to the side of the road. Where we caught our breath and watched that tire bounce and roll its way down the highway, as far as we know not taking out any other hapless motorcyclists and their sisters. 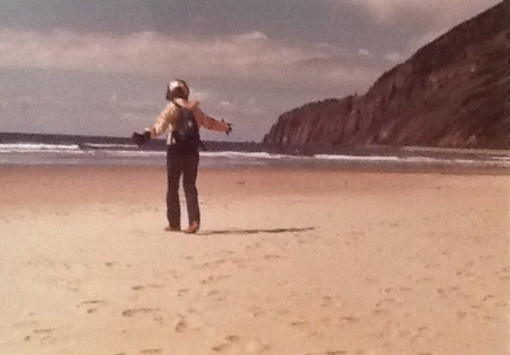 As you can see, we did make it to the Coast (my very first Lewis and Clarkish glimpse of the Pacific is recorded above). And we had many adventures. Which we will save for another day. Right now, we’re back to a more recent motorcycle. (Well, okay, it’s a Vespa. But still.) It was a gift, for Mother’s Day 2006, and came with a pretty good story too.

Here it is, as recorded in the New York Times’ Metropolitan Diary:

My Mother’s Day gift this year wasn’t flowers or chocolates or jewelry, but a cute little silver-blue Vespa. I was so excited, but I couldn’t ride it till I got a license. So I studied the manual, then went to the Motor Vehicle Bureau in Herald Square.

When my turn in line came, I told the stern-looking older gentleman at the information desk, “I’m here to get my motorcycle learner’s permit.”

After looking me up and down (I won’t divulge my age, but I was in high school when Paul McCartney was still the “cute Beatle”), he remarked, “You need leather.”

I’ll have you know that I got a New York Times coffee mug for that story. (Well, okay, so did the six other people whose stories appeared in the column that day.) And I did go on to get not only some leather and my learner’s permit, but my actual motorcycle license. (Which is, of course, a Whole Other Story, one involving the Motorcycle Safety School, the branch located under a bridge in the Bronx.)

But I do appreciate your readership, O Readers. And, speaking of appreciation, if you have a Mother, don’t forget: Sunday is Mother’s Day. True, it’s what we call a ‘Hallmark Holiday’. But that doesn’t mean your mother doesn’t deserve a shoutout. Or a Vespa.

18 thoughts on “The Motorcycle Diaries”