I am often amazed at the resourcefulness of New Yorkers. Just look around and you can’t help but be impressed by how they can turn almost any activity — playing bongos in the subway, playing Sponge Bob Squarepants in Times Square — into a money-making proposition.

Now that Autumn has arrived, and theatre season is back in full swing, I was reminded of a terrific example of New Yorker make-a-buck-out-of-anything ingenuity. And, since it’s Monday, it’s a perfect time to tell you the story — and also to tell you about the Metropolitan Diary.

It’s special feature that appears in the Times every Monday, where readers send in anecdotes about something that happened to them — or that they observed happening to someone else — here in New York. The anecdotes can be sweet, or sad, or funny. Personally, I’m partial to the funny ones.

If your anecdote is selected, it gets printed. In the Olden Days, you used to get a New York Times mug if your story got printed. These days, everyone’s feeling the pinch, even the New York Times. So you just get the honor of having your story printed. Which is still pretty cool.

As I was walking up Third Avenue at dusk recently, I couldn’t help overhearing this:

Wildly gesturing, exasperated-sounding thirty-something man to (I’m assuming here) his fiancée: “But the whole point of a bachelor party is that you’re not invited!!”

So, okay. Back to the theatre district. Here’s what happened.

The Dude and I had just left a restaurant on Theater Row when we encountered a man standing near the curb, sort of like he was going to hail a cab. He was dressed nicely, in a suit, even. Perfectly normal. Except for the fact that he had this black-and-white cat sitting on his head. It looked remarkably like one of those old Davy Crockett coonskin caps. You know, the kind with a tail trailing down the back. Only this was the cat’s tail.

The man seemed friendly, the cat (Blackie) was cute. In fact, we have a cat (Wombat) that looks remarkably like her. (See photo above). So, since we had a few minutes to spare before our curtain, we stopped to chat. The guy told us all about Blackie, how he trained her to sit on his head by being really patient, rewarding her with cat treats, etc., etc.

We smile, we chuckle, we start to turn away — when he calls out:

So much for us being seasoned New Yorkers. Of course we slipped him a few bucks. Guy’s gotta make a living, right?

How about you? Other than the Naked Cowboy, who you can read about here, and who I have already seen far too much of, have you spotted any other clever buck-making ploys in and around New York — or anywhere — lately?

The story as it appeared in the NY Times Metropolitan Diary

It’s the second story; the others are pretty fine too. Besides, at the end it tells you how to submit your very own Metropolitan Diary story. If yours gets printed, you’ll get a real thrill, if not a New York Times mug.

And, for more City Stories, recounted in this blog, if not the New York Times, check out Horowitz Plays the Bedroom and (Silly) Signs of the Times. Though the Horowitz story did appear as a letter to Vogue a few years ago.

Speaking of the Naked Cowboy (and why not?) I just opened my newest New Yorker, and look what I found: 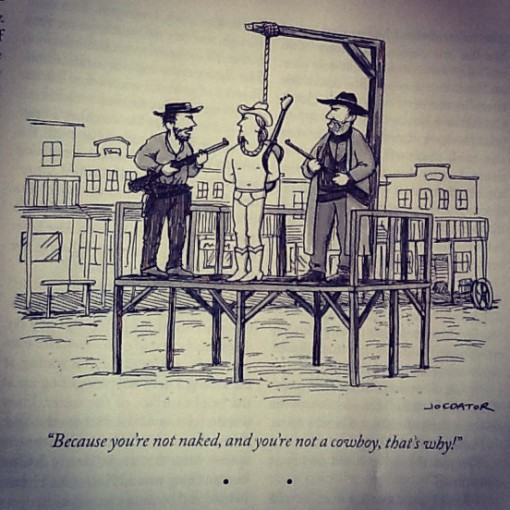 8 thoughts on “The Cat Is The Hat”