‘A Tale of Two Families (and an identity crisis)’

Okay. Let’s take a quick poll. What’s a brownie? Is it thick and cake-y? Or sort of gooey and dense? And what about oatmeal cookies? Fat, with raisins? Or thin and chewy, with chocolate chips?

And, not to make this all about sweets, what about potato salad? (that is, if anybody out there even eats potato salad anymore): is it sweet and sort of vinegary? Or made with mayo? And if it’s the mayo-y kind, would that be Hellmann’s, or Miracle Whip?

You can get into some pretty lively debates about these things. Because we all grew up with a certain, shall we say, family food ‘standard of identity’. Which is a real thing, I’ll have you know. The government actually has a set of ‘standards’ that determine the ‘identity’ of foods. Like ketchup. You can’t just mix up some red sauce and slap a label on it that says ‘Lutheranliar’s Ketchy Ketchup’. Not if it doesn’t meet the Government’s Ketchup Standard of Identity.

I learned this when I worked in advertising for companies like General Foods. Which didn’t really make anything that you could call an actual ‘food’. That is, that could sustain life. Or that, in General (hah), met the Government Standards of Identity for foods. Country Time wasn’t called ‘Lemonade Flavored Drink Mix’ because GF thought that sounded nicer. It was because it most definitely did not meet the Standard of Identity for ‘Lemonade’, which involved having real lemons in there somewhere.

Well, families have their own Standards of Identity for foods too. Why, I’ve heard friends say that they didn’t realize that something as simple as a peanut-butter-and-jelly sandwich could be so um, surprising till they went to another kid’s house after school and were served one made with raspberry jam. (‘It wasn’t grape! How could it be a real P B & J?!’) Or: ‘They gave me a grilled cheese sandwich, and it had this white cheese inside. Cheese is yellow!’

Which brings me to my story for today. It involves a little misunderstanding about a food served quite often in the two families pictured below. To look at them, they don’t seem all that different, do they? 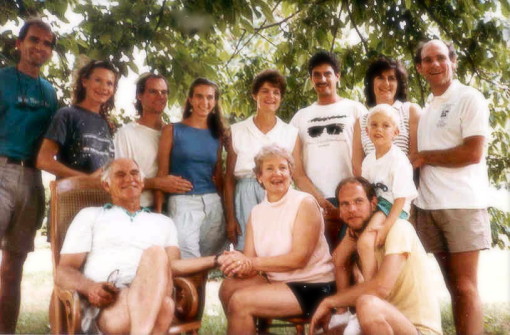 A gaggle of Henrys, hungry for potato salad made with Miracle Whip. (Looks like it’s too hot for stuffed peppers) 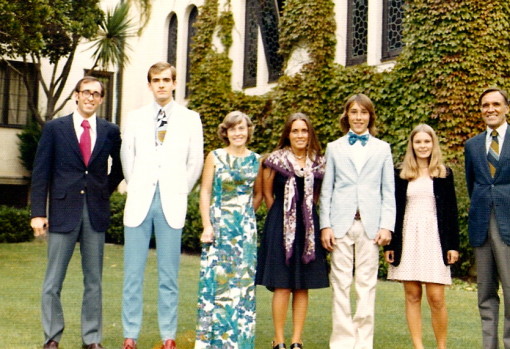 Whitmores dressed for a picnic where potato salad made with Hellmann’s will be served. No peppers will be involved in any way shape or form

But there were differences. And they were about food (for this story anyway). Oh, a cautionary note. The Dude absolutely hates it when I tell this story. But, since he never ever reads this blog, and no one else in his social-media-deprived family does either, I say ‘hah! anything goes!’

So here’s the story.

Shortly after His Dudeness and I got together, I was invited out to  their house in Amagansett (a house which we now own, but that is fodder for future posts). I was, as a Person Who Wanted to Impress Possible Future In-Laws, understandably flattered and eager to impress.

We went through the usual awkward Girlfriend Staying Over rigamarole (The Dude’s Mom: ‘I’ll put your stuff here in [Dude’s Real Name’s] room, shall I?’ Me: [Horrified silence])

Later, after some stilted family activity involving mopeds, it was time for dinner.

The Dude’s Mom, to me: “Carl (also known as Denny, short for Dennis the Menace) is home from college, and his favorite is stuffed peppers. So I thought I’d make them. I know it’s not very fancy, and it’s your first visit, so I hope that’s okay.”

Me: “Sure! I actually love stuffed peppers. My mom made them all the time when I was growing up. Great!”

So. The Whitmores array themselves around the table. There are five kids present, plus two parents, plus me. And one other person, the Boyfriend of Polly (the sister who was/is also known as Sparkle, after Sparkle Plenty, a character in a comic strip from the ’40s). You get the idea. There were a lot of people gathered around the ole Whitmore Family Board.

The Dude’s Mom circles the table with a big pot. From which she ladles, onto each plate, a very large meatball. A classic meatball, you know, made from ground meat and rice and the usual tomato sauce. A meatball. Not stuffed into a pepper. In fact, there is no evidence of peppers anywhere. At least not that I can see.

Now here’s the interesting part. Each person served his or her giant meatball says something like “Oh wow! Stuffed peppers! My favorite!” “Mom, you made stuffed peppers! Jeez!” And, “No one makes stuffed peppers like you, Mom!” (Classically ‘lutheranliar-like’ in its accuracy, that last remark, though probably unintentionally so.)

After we polish off our meatballs (er, “stuffed peppers”), I offer to help clean up, as Girlfriends Trying to Impress are wont to do. As I am scraping plates companionably with The Dude’s Mom, I happen to remark, “Wow. That was delicious! You know, my mom makes stuffed peppers too. But she, um, puts the meat, you know, into a pepper.”

To which The Dude’s Mom says, “Oh, I know what you mean, Dear. I tried that the first time I made stuffed peppers. But the meat just fell out, so now I just leave out the peppers.”

Okay. If a very large Whitmore Family is happy, who am I to judge? But then she served cheesecake. With graham-cracker crust.

Oh, by the way, that’s my mom up top, serving coffee. Which is so different everywhere that it deserves its very own post.

Time for a refill. See you next week.

24 thoughts on “The Emperor has no peppers”