‘Getting my Blue Suede Shoes(On)’

Last week the one and only Elvis Aaron Presley, bless his heart (and swiveling hips) would have celebrated his 80th birthday. (Big pause to take that in).

Now you Young People out there may need a bit of Elvis Ed (which you can find right here). But before you Wikipedia yourselves senseless, let me just say that, in his day, Elvis could have out teened-frenzied that Bieber Boy with one pouty lip tied behind his back (now there’s an image). And here’s an image of each; you be the judge. But do notice how Elvis didn’t need to resort to tattoos to look, um, hot. And he never posed in his (or Calvin’s) underwear. Not that I know of, anyway.

JB struts his stuff in (almost) the buff

While Elvis smolders with merely a glance

So. This story happened when our family lived in Memphis. Just like Elvis! As you may recall from my previous posts ‘That’s My Bob’ and ‘My Mom, the “Party Girl”‘, Memphis was a city rich in story material, even though we Henrys only lived there for four years or so. Here’s a picture of the Three Then-Extant Henry Kids about the time of this episode: 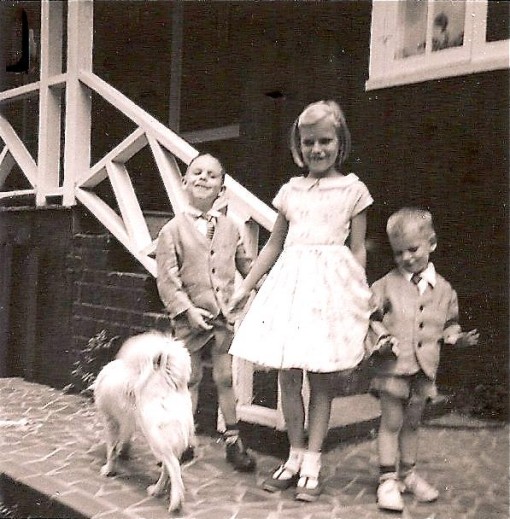 Sandy (Dog), Scott, Me, Roger. All wearing Easter finery Made by Mom. Well, except for Sandy.

We were the only Henrys (or Petersons, for that matter) who lived anywhere ‘lower’ than about Springfield, so it was a looong trek for relations to come visit. And when they did, my parents would always include the Elvis Tour. (When I say Elvis was a Big Deal, I could not possibly exaggerate.) My Mom and Dad would pile up the Ford station wagon (two-tone, cream on brown) with as many relatives they could squoosh in (no seat belts in those days; cars could be squooshed). And then they would basically drive around trolling for Elvis.

Which I know sounds weird in these days of the celebrity posse and the tinted-window Lincoln Navigator and the private security force, but in those days celebrities, even those as crazy-popular as Elvis, could just kind of, um, roam around and do their thing. And people could actually see them while they were doing it.

And Elvis wasn’t all that hard to find. For one thing, he happened to live pretty close to my parents. (No, my parents hadn’t ‘made it big’. They were still renting a room to Bob Sipowich, remember?)

Anyway, Elvis House’s, the famous Graceland (I actually remember this from Back Then; haven’t visited Memphis since we lived there) had a wonderful wrought-iron fence that looked like interconnected musical notes. Made even more wonderful by the fact that starstruck teenage girls would slip love notes into the fence’s note-shaped apertures, hoping that Elvis would get them, and actually read them. (And maybe even call them up or whatnot.) Such is youth.

Oh, and Elvis was also easy to spot because he was indeed spectacularly gorgeous. When I spoke to my Mom a while ago to fact-check this story (remember, I was only about 7 when it happened), she said he was so incredibly glamorous that he gave off a sort of ‘aura’. (Now, my Mom uses this word semi-ironically, but still.)

So. We’re in a car piled with relations. In front we’ve got my Dad driving, my Grampa Peterson riding shotgun, and my brother Scott. In back we’ve got my Gramma P, my Mom, me. Oh, and Little Roger was in there somewhere too.

We’ve already ridden past the love-note-and-swooning-girl-festooned fence, where that day we struck out: no Elvis driving in or out in one of his four Cadillacs. But, just as we pulled up at a stoplight on our way home, this gorgeous white Harley pulls up. Seated upon said Harley was an even more gorgeous man, clad head to toe in dazzling Harley-matching white. 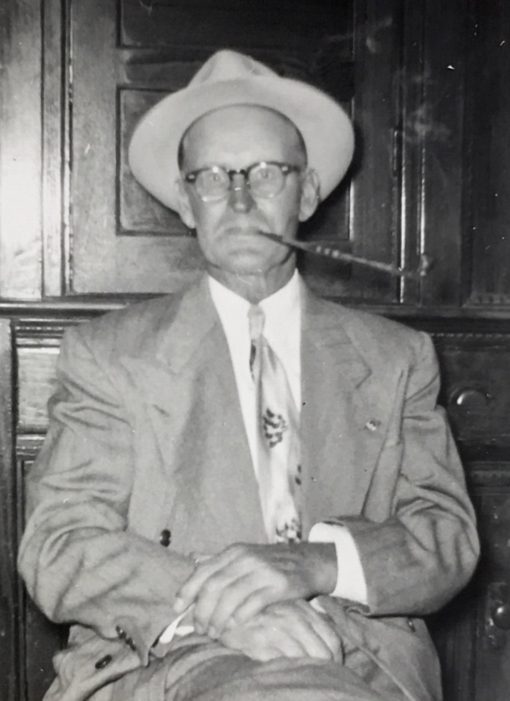 These being The Days Before Automobile Air Conditioning, and, it being summer in Memphis, the car windows were all open. Which meant that the gorgeous hunk-a-hunk of burning love seated upon the Harley just inches away could definitely hear Grampa’s skeptical grunt.

He turns toward us, flashes us a dazzling celebrity-wattage smile, and says ‘Well, indeed I am, Sir. Elvis Presley. Glad to meet y’all. And that’s a mighty cute little gal you got there.’

(That would be me! A ‘mighty cute little gal’!)

Pretty thrilling. Though it would have been even more thrilling if I could clearly remember it. Or if I’d been old enough to have fully appreciated the sheer gorgeousness of Elvis. But we work with what we’ve got.

Oh. And the ‘Shoes(on)’ thing? I don’t really remember this, either. But, apparently, when I was even smaller, I thought that ‘shoes’ were ‘shoes-on’. Because people would say ‘Alice, go get your shoes on!’ Or ‘Do you need help getting your shoes on?’ So that’s what I thought they were called. (‘Can I wear my blue suede shoes-on today?’) Kind of like that kid who thought there was somebody called Round John Virgin in the song ‘Silent Night’.

As I mentioned earlier, there are loads more Memphis Stories. Like the time my Aunt Marilyn had my brother Scott lie about his age to ride the train with a cheaper little-kid fare, thus undermining his trust in adults and (almost) scarring him for life. But this post is getting way too long. So that one, and the one about the snake behind the washing machine (more snake tales here!) or the mouse that crawled up Roger’s pant leg, will have to keep.