‘Those Lazy Days and Crazy Nights out on Louse Point’

Yesterday The Dude and I took a little journey down Memory Lane. Well, actually, it’s called Louse Point Road, and it’s where we used to rent a teensy tiny little boathouse in the Summers of Our Youth. (Incidentally, it’s called ‘Louse Point’ because it’s a spit of land that, apparently, ‘looks like a louse’ from the air. Couldn’t it have ‘looked like’ anything else? I mean, really. A ‘louse’?)

We took this trip not in a car, but on our ‘bikes’. The Dude’s is a contraption called a ‘Zero’. It’s an electric motorcycle. (No, it doesn’t have, like, a really really long cord; you charge it, sort of like it’s a gigantic electric toothbrush.) Mine is just your garden-variety Vespa. (You can read about my Vespa-related exploits — and see pictorial proof of the Vespa’s existence — in ‘The Motorcycle Diaries’.) 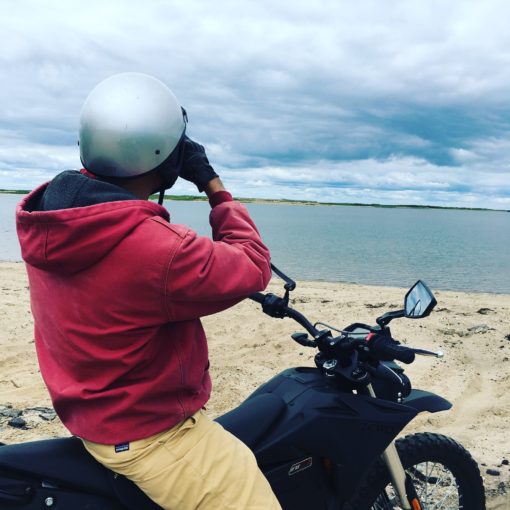 Dude, the Biker Birder, checking the horizon for anything of avian interest 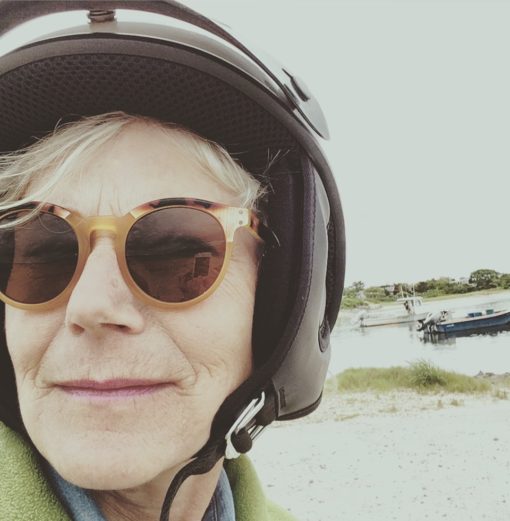 Me, on the same ride. Trust me, there’s a Vespa down there somewhere

But back to the boathouse and Memory Lane (er, Louse Point Road). I honestly don’t know why this rental was called a ‘boathouse’. There certainly weren’t any boats in it, at least not when we stayed there. It was sort of a garage-like structure next to the driveway of this much bigger, quite fancy, house. (Which, during our stays, we called the ‘Party House’, because the folks up there were always giving parties. They were our landlords, so we couldn’t complain; besides which, they would usually invite us.) Perhaps our party-giving landlords just thought ‘boathouse’ sounded cooler (and could command more rent) than if they called it a ‘garage’ or ‘shed’.

Somehow we found this boathouse (these were the prehistoric Days Before The Internet, so I don’t remember exactly how), and it was pretty cheap. But even ‘cheap’ was too ‘spendy’ (as my Mom would say) for us to manage it on our own. So we asked our Best Friends At The Time to join us.

This best friend couple was the perfect choice because, not only could they afford to chip in on the rent, they were short.

And shortness was important. See, this boathouse was advertised as having ‘two bedrooms’. But, in reality, the floor plan consisted of one huge uninsulated ‘room’ with what passed for a bedroom stuck on one end. Oh, and there was a bathroom. Of sorts. The kitchen? Well, let’s just say we did most of our cooking outside. And not because it’s more fun that way. 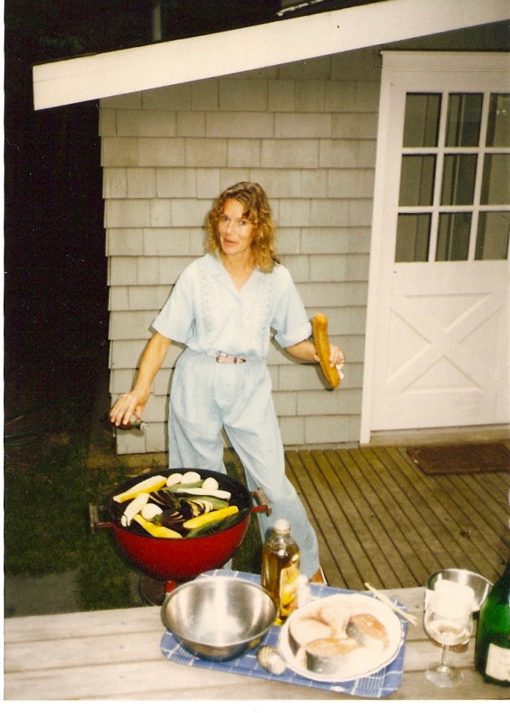 Is that a baguette or are you just glad to see that dinner’s almost ready? ‘Dining in’ was ‘dining out’ at the boathouse, the kitchen being so small

The ‘second bedroom’? It was this ‘loft’ that had been tacked on above the kitchen area. You reached it by a miniature circular stairway — like those metal ones you sometimes see on (small) boats. No way could a normally-sized person stand up up there. Our Short Friends, however, had no problem. The Dude is pretty tall, and I’m just average. But these Short People were both so short that you were tempted to toss them. Like, at a target. As in ‘Wolf of Wall Street’.

In spite of being height-challenged, the Short People were super-fun to share with. Of course I won’t reveal their names. But I will tell you that The Short Guy had a nickname: Ooooo C’mon. He got this nickname in college because when he was doing anything competitive, like playing squash, he would make like Andy Murray at Wimbledon and chastise himself. Except he would mutter ‘Ooooo C’mon!’ instead of fineable profanities.

Incidentally, The Dude also got his nickname in college (the same college, actually; these two went way back). It was, surprise, ‘The Dude’ — and it was because he wore a tie to the Freshman Mixer.

There was a lot of ‘Ooooo C’mon’-ing during those Shared Summers, since we were young and really competitive. It was all about who could bike the farthest and fastest (on regular, non-motorized, bikes). And who could best master the beach start, the carving turn, and the duck jibe. (That’s a windsurfing mast propped against the wall behind the couch in the photo at the top of this post.) The Short Spouse wasn’t into those things. (She considered doing her nails on the deck an outdoor sport). But at night she was definitely the most competitive participant in our bloodthirsty bouts of a card game called Hearts and a board game called Risk.

Sometimes these games would get so heated that The Short Spouse, in a fit of pique, would throw her Hearts cards in the air or scatter her Risk armies to the far corners of the one big room, then stomp up the circular stairway and commence to pout and/or weep. That was Ooooo C’mon’s signal to go up there and ‘comfort’ her. That’s when the boathouse felt particularly small.

Oh. And when we weren’t engaging in competitive outdoor or indoor sports or joining the revelry up at the Party House, we did things like grab burgers and fried zucchini at the long-gone-much-lamented O’Malley’s, catch a movie at the East Hampton Cinema, then top off the evening with a brown bonnet eaten in the purple glare of the outdoor lighting in the parking lot at R. B. Snowflake.

On one memorable summer night, we had come home happy and exhausted from seeing, I think, E.T., when I grabbed my turn to perform my evening ablutions. I was shocked to see, in the bathroom mirror, that my enthusiastic pre-movie burger eating had created a huge red ketchup ring around my entire mouth. Needless to say, I blamed it all on The Dude. Me: ‘Why didn’t you tell me I had ketchup all around my mouth?’ Dude: ‘I didn’t notice.’ Me: ‘You didn’t notice? I look like Bozo the Clown!‘ 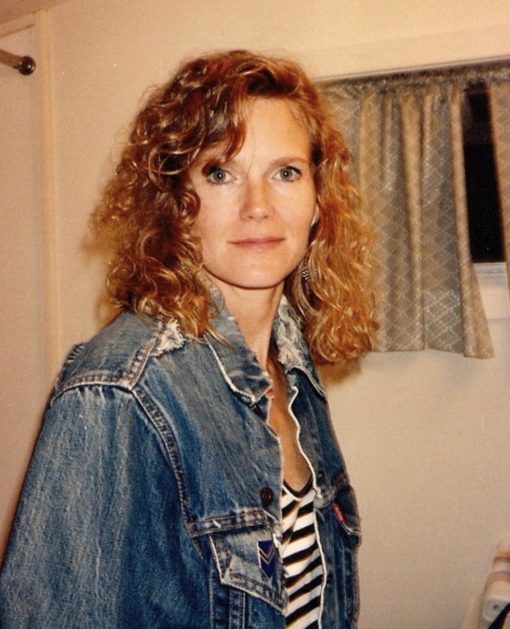 Me. In the tiny bathroom. But this time, sans Bozo Mouth

Well. The Dude and I were understandably eager to catch a glimpse of the boathouse on our ride yesterday. Maybe we’d stop and snap a quick double-selfie out front, the place being so close to the road and all.

Yup, the Party House was still there, and looks much the same. But, alas, the boathouse is no more. In its place is an actual house. A small house, which it is has to be, squeezed in there between the driveway and the road. But it sure looks bigger than the boathouse of yore.

We would have stopped to take a picture. But we noticed two Thirty-Something couples at a table outside. They were sitting down, so we couldn’t tell if two of them were Short People. Or if they even needed to be, in this new version of the boathouse.

Enjoy your burgers and brown bonnets, O Faithful Readers. I’ll be back next week with another summery tale. Just make sure you check in the mirror for Bozo Mouth before you go to the movies.

34 thoughts on “Sharing Summers with the Short People”