‘And other Dear (Metropolitan) Diary entries’

A couple of weeks ago, my story (‘The time I had a blind date with an eye doctor‘) came by way of a suggestion by my friend Mary Ann. (Thanks again, Mary Ann!) This week’s is thanks to an idea from another friend, Jim. (Who writes a very cool blog called ‘Forged in Buffalo’. Plug plug plug.)

Jim reminded me that my stories used to appear fairly regularly in the New York Times. Honest. There is this column that appears on Mondays called The Metropolitan Diary. As the Times website puts it, ‘Since 1976, Metropolitan Diary has been a place for New Yorkers, past and present, to share odd fleeting moments at Bloomingdale’s, at the deli around the corner, in the elevator or at the movies.’

You can well imagine that I’ve overheard my fair share of ‘odd fleeting moments’ (emphasis on ‘odd’), and that I haven’t been shy about sharing them. Only now I share them with dozens of followers of my blog rather than with thousands of readers of the New York Times.

Anyway, Jim thought it might be fun to do a piece about some of my Diary entries. (‘Good timing’, I’m thinking. Because on Tuesday, which is Blog Day around my house, I will be just getting home from visiting my mother and sister and who knows if I’ll be able to rustle up a post in my bleary-red-eyed state. So if I write one now and put it in the computer-file equivalent of the Blog Fridge I’ll be all set.)

But back to this blog and its (hilarious) stories. Those of you who have been with me a while may remember The One About The Guy With A Cat On His Head. Or The One About Me At The DMV Getting My Motorcycle License.  Those were originally Metropolitan Diary entries. Of course, those are just tips of the iceberg, ‘odd fleeting moment’ wise. (That is, if an iceberg can have more than one tip.) I’ve got plenty more.

Here’s one. I rather think it’s one of my best. (Well, anyway, one of my shortest):

The Times loves to hear reports of your ‘overheard conversations’, too. And trust me, if you’re out on a New York street with your ears open and a pen handy, you hear all kinds of random conversational gems. Like this one:

This was from 2006. Wonder if they’re still together. Or even actually got married

See? Reporting in to Metropolitan Diary is fun! It’s easy! I bet you’re all going to want to submit stuff. (Or, at the very least, move to New York.) Here are those rules again, just in case you missed them the first time.

BTW, it used to be that you got a bottle of champagne if your Diary piece got used. (That was nice.) Then, after a while, they changed the prize to a New York Times mug. (That was okay too, and lasted a whole lot longer.) But I guess times got tough at the Times, because just when I was well on my way to service for six they stopped doing even that. Now you just get the thrill of being a Published New York Times Writer. Which is nowhere near as thrilling as being a Writer of a Wildly Popular Blog. (This I can only imagine.)

Well. I did tease you with that ‘walking the fish’ title. So I’ll end with that one (which, if you’re so inclined, you can read ‘in context’ in the Metropolitan Diary of January 16, 2011 — it’s the fifth entry): 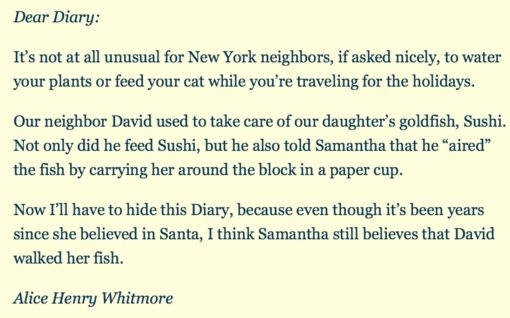 Note to Child: don’t read this if you don’t want your illusions destroyed

13 thoughts on “Walking the goldfish”