And I’m going to tell it. But first I have to set the stage a bit.

See, back in the 80s when this tale takes place, I went out a lot. With a lot of different guys. Trust me, this wasn’t at all unusual at the time. Most of my friends also went out with lots of guys. Young People then were not so into that going-out-in-packs thing, much less that thing called ‘hooking up’. (I’m not sure I know exactly what that means, and I don’t want to know. And please don’t mention Tinder.) True, there were a few couples into that serial-monogamy thing, but most of them were married. 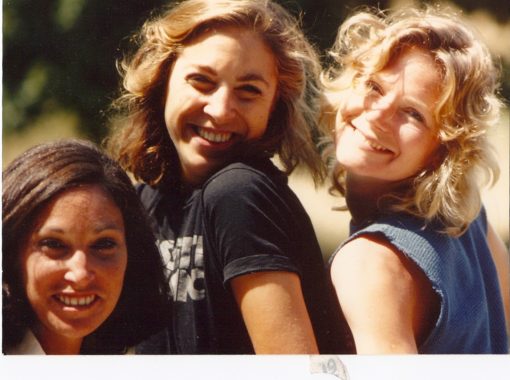 A bevy of pre-dating-app beauties. The one on the right (me, hah) gets the fateful cinder in her eye

So. During the day I’m having a blast working at Ogilvy. Nights and weekends, I’m having a blast going out with guys. Let’s see, at the time of this story I was going out with a blonde surfer-type guy from California, an energetic older guy (he was probably 45) I met running in Central Park, a hunky television producer who owned his own Personal Truck, and, oh, off and on I was also seeing a Russian waiter. I’m not counting Steve Martin. I met him a week after I met The Dude. (If you have a sec, you can read that story here. It’s a pretty good one.)

I was also doing a lot of running in those days. As in, training for marathons. (Don’t worry; I’m not going to bore you with marathon stories. At least not right now.)

One fateful day while running on the bridle path in Central Park I managed to get a cinder in my eye. I couldn’t get it out myself, so when I got to work, I went to the nurse. (Yes, Ogilvy had an on-site nurse; she was called Nurse Penny.)

Nurse Penny couldn’t get it out either, so she sent me to an ophthalmologist on the Upper East Side. (Now, this story would be even better if the Ophthalmologist in Question had been Dr. Dude, but nope. His name was Dr. Bloomfield.)

So Dr. B is probing around in my eye, chasing said cinder. He’s also asking a lot of questions. Like ‘are you married?’ (‘nope’) ‘are you engaged?’ (‘uh-uh’) ‘are you seeing anybody special?’ (‘got an hour?’) I’m starting to feel a tad uncomfortable, since his giant gold wedding band keeps glinting its way into my line of cinder-blocked vision, when he says ‘oh! I’m not asking for myself.’  (‘whew’) ‘I have this doctor friend I think would really like to meet you.’

Well. Seeing as how I didn’t have any doctors in my lineup, I say ‘sure, I’d be happy to meet him’. I’m still helpless in the big poofy patient chair when Dr. B grabs his desk phone, punches in a number, says ‘Hello, Dude’s Real Name, I have someone here just perfect for you’, and hands the phone to me.

‘Um, hello?’ I manage, and the next thing you know this Mystery Doctor and I have made an arrangement to meet for dinner at this sushi place he knew. (We did have an ‘escape clause’; if we didn’t hit it off we’d leave after one drink.)

This was a blind date (with an eye doctor, hah), so how would he know me? I told him I’d be wearing white, thinking that would do it. Well, this was August. Do you have any idea how many women wear white in New York in August? About as many as wear black any other time of year. The Dude told me later that his head snapped around every time some woman walked in wearing white. Sometimes he wanted to hide under the table. 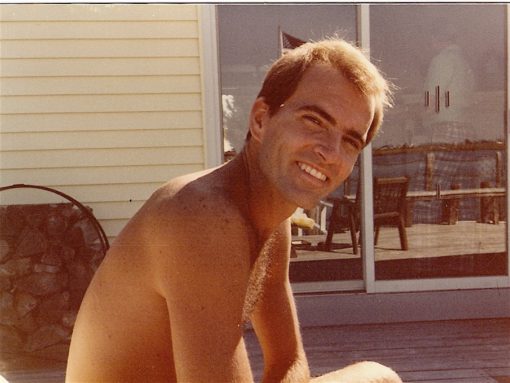 Hubba hubba. The Dude, wearing a pearly-white smile and not much else — definitely not his white doctor coat — at about the time of this story

But we met, we clicked. And the surfer and the old guy, the producer and the Russian waiter, and yes, even Steve Martin, all vanished into the mists of dating history.

The Dude and I were at a party once when someone asked how we met. I had just gotten to the part about Dr. B handing me the phone and saying ‘I have someone here just perfect for you’ when His Dudeness interjects ‘Oh, yes. He did that all the time. He must have introduced me to a dozen girls.’