‘And other feline friends from days gone by’

Somewhere among the snapshots that used to live in the attic in a big cardboard box — the photos we were allowed to rummage through on rainy days (see ‘In An Alternate Universe, I Would Have Been a Redhead’) — is one of me with my Aunt Marilyn’s cat Herkimer.

I’m, oh, two in the picture, and poor Herkimer looks about as pleased at being clutched by a toddler as you can imagine. Aunt Marilyn said I used to thread the poor thing through the gaps in a wicker chair.

Now the cat in the picture at the top of this post looks marginally happier. And I look pleased as punch. This kitty never had a name that stuck (I kept coming up with names that didn’t ‘take’; for some strange reason, Christopher Columbus Kitty was one) so everybody just called him Kitty.

(I am notoriously bad at naming. As an adult, I had another cat named Kitty. In fact, when I was pregnant and trying to think of baby names, my Oldest Younger Brother Scott said “Why not just go with ‘Baby’? Since that’s what you’ll end up calling it.”) 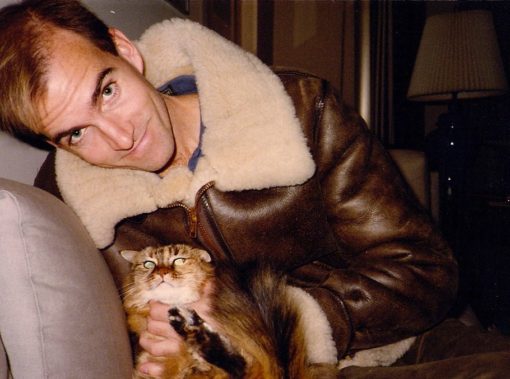 The Dude poses with The Other Kitty Named Kitty. Before we had the Baby Who Is Now Called The Child

But back to the Original Kitty. I was five when I left a note, written in pencil on lined yellow notebook paper, on my dad’s pillow: ‘Please, I want a citty’. I sure wish I had that note, misspelling and all.

See, my parents grew up on farms, and my mom had told me that my dad wasn’t into cats. Cats were somewhat-smaller farm animals that hung around the barn and caught mice. They weren’t pets.

But the note worked, and I got Kitty. Whom I adored. You know how there are cats, and then there are great cats? Kitty was a great cat, name or no name. We got him when we lived in Memphis (which is where that picture was taken), and he moved with us to Carlyle, Illinois.

He lived with us happily in The House on the Highway, where he and Sandy the Dog would sit on the porch, shoulder to shoulder, and watch the traffic go by. And he didn’t mind the move to The House on the West Side (where we lived when Howie stole the muscle shirt). But moving a third time, to The House Where We All Grew Up — a move that ended up lasting, for my parents at least, forty years — well, that move was the last straw for Kitty.

Kitty, of course, was an Outdoor Cat. All our cats in those days were Outdoor Cats. And our move to that last house, like Kitty’s names, just didn’t ‘take’, not for Kitty. He just took off. Absconded to the Case-Halstead Library a couple of blocks away. And no matter how many times I brought him home, he refused to stay. He lived on happily in the library (the librarian liked him a lot), where of course I could visit him as much as I wanted. But it just wasn’t the same.

But I suppose we got ours back, karma-kitty-wise. Because our next great cat left his Real Family and adopted ours. He was big and gray and, theoretically, lived down the street. But he kept showing up at our house. Mom said he would attach himself to our storm door and mew piteously to be let in. One of the little girls from his Real Family kept coming over to collect him, but he refused to stay and she finally gave up. Thereafter he was known to the neighbor kids as ‘The Cat The Henrys Stealed From The Hazlets’. 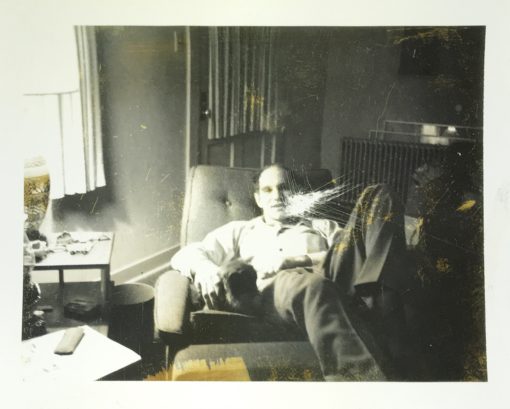 You can see that he (Dad) has gotten comfortable with the idea of cats as pets. Here he is with Major, the Kitty We Stole From The Hazlets

His actual name was Major. After a Civil War general, Major Mosby, who was known as ‘the Gray Ghost’. (Major was gray, you see.) My mom, unlike me, was — and is — a terrific namer.

BTW, Mom did take pity on me and get me another cat right after that heartbreaker Kitty deserted me. But the poor thing didn’t last long, not even long enough to have a name (not that I was so hot at naming kitties). I will spare you the details, but they involved a cold day, a running car motor, and a cat who crawled under the hood to get warm.

But back to Major, who was, as I mentioned, a great kitty. He loved to watch TV. He liked basketball games, where he would watch the play as intently as any March Madness maven. Oh, and Mutual of Omaha’s Wild Kingdom. Where once a squawking bird caused him to attack the screen. He realized at the last minute the bird wasn’t real and stopped, mid-pounce, to calmly lick his paw.

He also locked Scott out of the house once. He (Major) was seated inside on the radiator next to the glass back door, when he saw Scott and, in his eagerness to be let out, stepped on the latch. 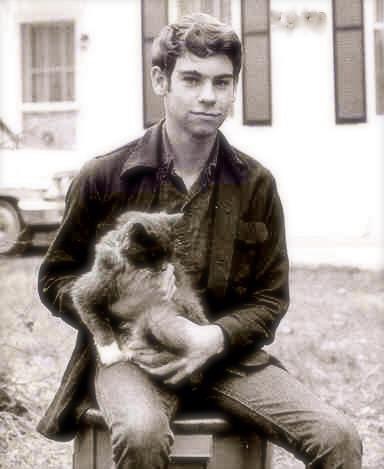 Scott, sometime before or after being locked out of the house, with Major

Oh. There is another kitty who deserves mentioning, even though I was grown up and gone when she was in residence. This cat (named Kansas City Kitty, shortened to — you guessed it — ‘Kitty’ ) started out belonging to me. I adopted her when I was living in Kansas City right after college. She, rather unfortunately, kept mistaking the shag rug for her litter box, so I shipped her off to Carlyle.

My parents were catless at the time, and happy to take her in (at least I think they were). They did have a dog, though. A dachshund named Simon. So my mom, ever the clever namer, named her Schuster. (Interesting small-world note: Carly Simon is of the ‘Simons’ in Simon & Schuster. She was married to James Taylor, for whom The Dude is constantly mistaken. Which means that my mom’s dog was named after the dad of my husband’s doppelganger’s ex-wife.)

Well. Poor Simon met an ignominious doggie end involving a busy street. But Schuster stuck around for ages. And adored my dad. According to my Mom, Schuster adored my dad so much he would follow him around when he was tending to his roses, and climb into his suitcase when he was packing to go on a business trip. Schuster was responsible for converting my dad from “What? You want a cat?” to One Of Those People With A Cat Always Firmly Attached. 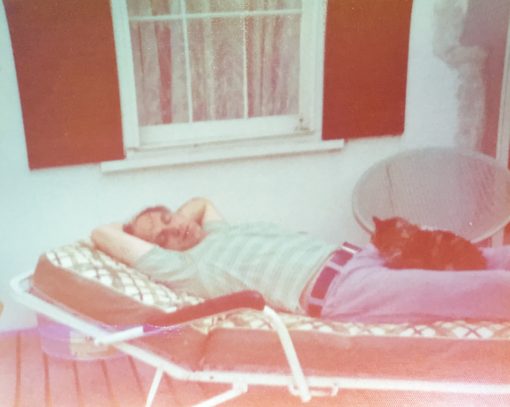 It helped that Schuster enjoyed napping almost as much as my Dad did. (Check out ‘Let Sleeping Dads Lie’, if you are so — heh heh — inclined.)

Oh yes, The Henrys had dogs, too. Some great dogs, who deserve more than shoehorning into a Cat Post. So hey Sandy and Hermie up there in Doggie Heaven — and even you too, Horrible — hang onto your ham bones, ’cause I’m writing a whole separate piece just for you. I’m hoping you readers won’t have to wait too many dog years to see it.

In closing, I simply must share this picture I found of The Child with the Cat of Her Youth. The Child, like my mother, is an Excellent Namer. She was the coiner of the now-departed Obama and Mango as well as Current Cat Wombat, and named this one Tuna. (Grampa and Lipstick were her backups, both, in my opinion, excellent names as well.) Tuna, of course, has her own story, which you can read by clicking here. Me? I’m going for another cup of coffee. See you next week! 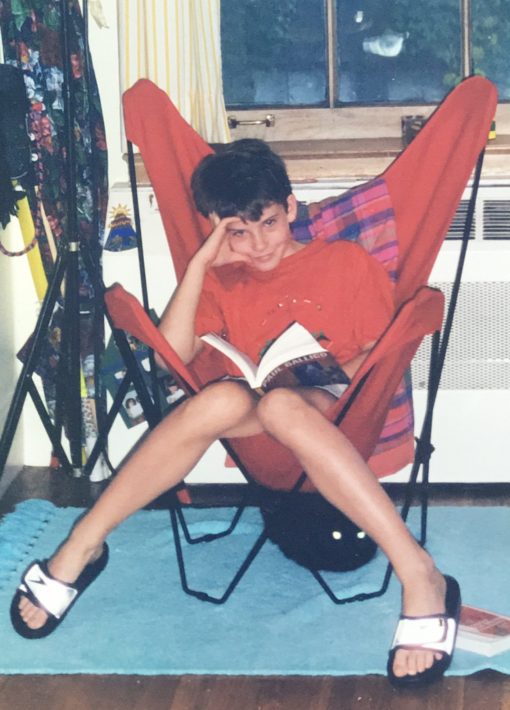 The Child, in a similar chair, at a similar age, with Tuna