“It was the best of times, it was the worst of times.” Nope, Dickensonian riff be damned, it was never “the worst of times” with the two lovebird kitties pictured up there at the top of this post. (Speaking of Dickensonian, I almost titled this piece ‘A Tail of Two Kitties’, but, thank goodness, restrained myself.)

The kitties whereof I speak were a big ole orange striped guy we called Mango. And a skinny sort-of-shy black one the neighbors called Midnight. These were two very friendly kitties, and not just to each other. Both of them had at least two families — one even a celebrity family — a phenomenon I wrote about in ‘Lost Cat: Answers to the name “Mango”‘.

Mango was the one we found first. Or, to be honest, found us. The Child, six or seven at the time, was entertaining a little friend one weekend when I overheard high, squeaky ‘animal-luring’-type voices. When I went to investigate, I saw two small girls trying to entice a huge furry animal covered in bugs into the house. Naturally, I shooed him away. I had another mom’s kid in my charge, you know. (Cue the angry phone call when the kid goes home with ticks.)

But he came back. The kitty; not sure about the kid. And, on closer inspection I realized the ‘bugs’ were actually freckles. By then, of course, what with the purring and the ankle-rubbing and the utter charm of him, I was smitten. Probably even more so than The Child was. But just to be on the safe side, I took him to the vet. Whose name was (and is), I kid you not, Dr. Katz.

Dr. K, after duly appreciating the fact that I did not say anything cute about her name, said His Orangeness was just fine. He’d even been ‘fixed’. “Here’s how you can tell,’ she went on as she indicated (thank goodness) his clipped ear. 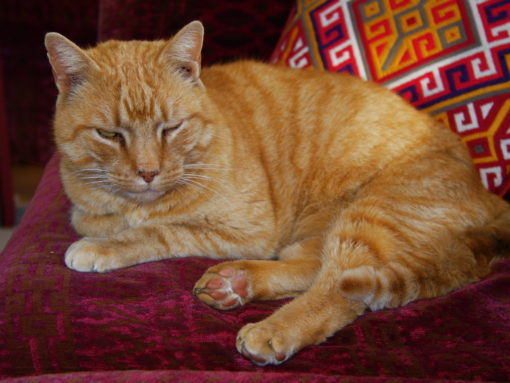 He has freckles on his but(t), he is nice. Note clipped ear (his right, on your left)

See, out Amagansett way, bands of animal-loving folk catch feral cats, have them neutered, and then release them. But first they clip an ear so other animal do-gooders don’t neuter them all over again. (ouch!) And to think I had thought good ole Mango — his name by then, courtesy The Child — had just been on the wrong side of a few barroom-style cat fights.

Nope, ix-nay on the ats-fights-cay. Mango was, quite literally, a big pussycat. The lyrics ‘bend me, shape me, anyway you want me’ could literally have been written about Mango. I liked to sort of sling him over my shoulder and drape him around my neck, kind of like a feline infinity scarf. 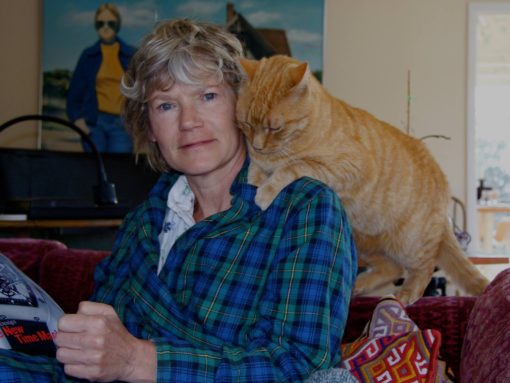 Mr. Mango on my shoulder. It’s the truth, it’s actual, everything was satisfactual

The Dude liked to hold Mango under his ‘armpits’ and dance him around the kitchen. Yes, Mango liked it too. 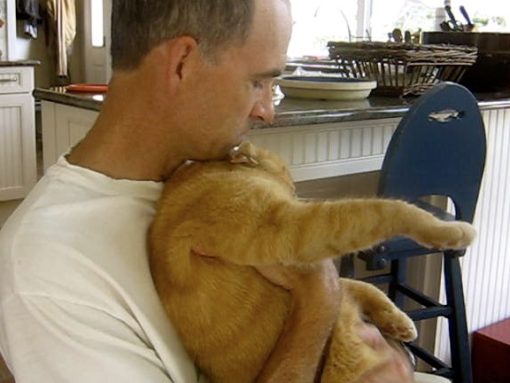 The Dude and Mango sitting one out. Yes, his head is still attached

Oh, of course he would come when we called him. I’d open the second-floor slider and yell “Mango, Mango!” and he’d come bounding through the yard, leap to the top of the outdoor shower wall, then sort of chin himself as he used the roof gutter to pull himself up to reach me. And he performed this feat of feline acrobatics quite often while simultaneously carrying a mouse in his mouth.

See, Mango loved us so much that he treated us like part of his pack. (Do cats have packs? Or is that just dogs?) At any rate, he was always bringing us little gifts. Mostly dead gifts of the rodent variety. Once I was sitting on the deck, reading quite peacefully, when Mango presented me with a chipmunk, placing it reverently at my feet. I praised him, then went back to my book. Next thing I know, the chipmunk is in my lap. “Hey!” you know Mango was thinking, “I went to all the trouble of catching you that darned chipmunk — now go on and eat it already!” 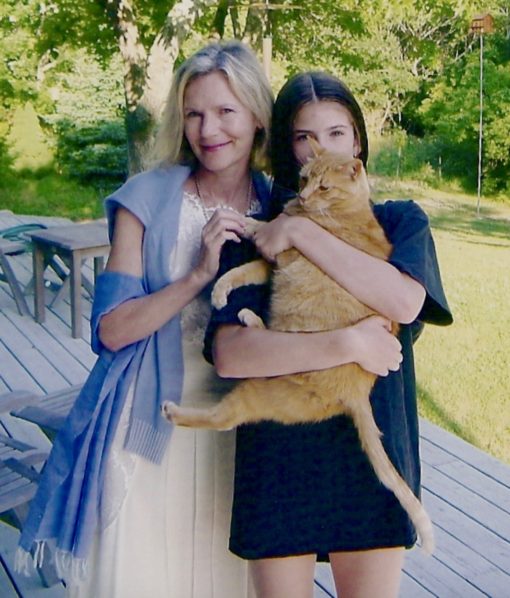 Mango making like a large stuffed animal a few years into his reign. The chair where I was reading is in the background, tho the chipmunk is long gone

Well, about now you might be thinking “Enough about Mango; what about the black kitty?” Or you might not, but I’m going to tell you anyway.

This Other Kitty started showing up a couple of years after Mango ‘adopted’ us, and liked us okay (we had food, natch), but adored Mango. I mean really adored him. I found myself blushing on more than one occasion when, innocently glancing out the kitchen window, I caught them in The Act. You know. That Act. Like on a nature show. Or in National Geographic. And I do mean ‘graphic’.

Well, what with Black Kitty acting so friendly and all, it seemed like another vet visit was in order. So Dr. Katz is mid-black-cat-exam when I tell her about the amorous highjinks that’ve been going on and ask if ‘she’ should be spayed. (We love kitties, but didn’t want any baby ones, thank you very much.) “She? She? This cat is male,” goes Dr. K. “Here’s how you can tell,” she went on as she indicated something quite other than a clipped ear.

Then she (Dr. Katz, not the non-female cat) went on to explain that the “love that dare not meow its name” (my phrase not hers) is quite common in the Cat Kingdom. If you’re not sure what I mean by this, feel free to click away for some ‘splainin’. Hint: It has to do with Oscar Wilde.

Well. Now that we knew Back Kitty was a he, not a she, and not being fond of the gender-neutral name ‘Midnight’ (which was the Other Family’s name for him anyway) we named him Obama. We did this partly because he was half-black but mostly because it infuriated our Best Friends, who happen to be Conservative Republicans. (I know, I know; don’t get me started, but we’ve known them forever.)

Anyway. Our Obama stayed pretty much on the downlow, except when the food bowl was out. But after his buddy Mango went on to the Great Cat Box In The Sky, he must have really missed him, bless his little heart, because he started craving our attention. If you have a sec, you can watch him follow me (almost) to the beach in this little movie I made back when I drove everybody crazy making movies instead of writing these blog posts every Tuesday. See you next week with another one — blog post, not movie — which won’t be about cats. I promise.

4 thoughts on “A Tale of Two Kitties”