Out on my walk today, dodging double-wide strollers and long-legged schoolgirls clutching Starbucks pumpkin-spice lattes, I felt a bit of a nip in the air. I’m a person who really hates to see summer end (see last week’s ‘The days are long, but the season is short’ for a nostalgic riff), but even I was getting tired of walking through what felt like hot dog breath — at 6 in the morning.

I was going to write about houseguests. And I still might, though The Child has cautioned me that some of my subjects might recognize themselves. But then again, she also told me that ‘this is my blog and I can write whatever I want’.

But all those schoolgirls — and the nip — reminded me of the story of how The Child got into nursery school. So I decided to tell that one instead. (Besides, I have to go to the dentist in about an hour, and this is a quick story.)

See, here in New York City (and in other Big Cities, too), getting into nursery school is a Very Big Deal. Apparently, if you don’t get your 3-year-old into the ‘right’ one, he or she will miss her (let’s stick with the feminine pronoun, since The Child is a girl) chance to grow up to be a Captain of Industry or a Supreme Court Justice. (Which is the job aspiration to have, not ‘President’; see my ‘Now Let’s play Supreme Court Justice’ for reasons why).

There are books written about getting your child into nursery school. Seriously. Someone tried to loan me one. You should have seen my face as I politely refused.

See, sometimes what you don’t know can’t hurt you. And this was one of those cases. When The Dude and I were on the hunt for a nursery school for our Precious One, we were blissfully unaware of how difficult it was.

We did have our own criteria. The most important of which was not ‘Do rich and famous people’s kids go there?’ or ‘Does the CEO of Morgan-Stanley’s kid go there?’ or even ‘Will my kid get into Harvard if she goes there?’ It was ‘Is it close to where I live so I can drop her off on the way to work?’

So we visit this school. It was close, it wasn’t very big, and the Headmistress (yes, that’s what they call her) greeted every child at the door with a handshake. We liked all of this, especially the close-to-where-we-live part. 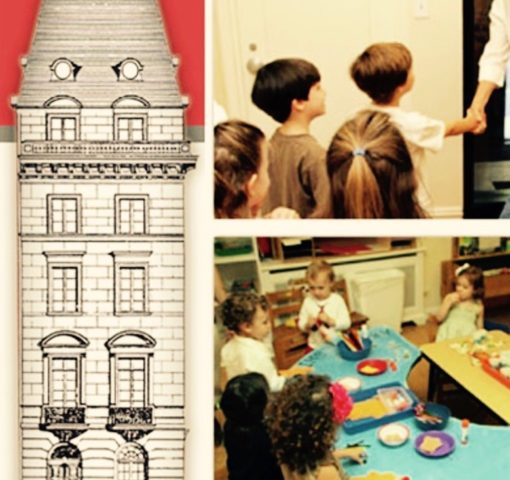 Smallish, polite, and full of cute kids — even to this day! — we liked this school. And gosh, it liked us back

But, um. You can’t just go ‘Hey, I like you, Nursery School. Let’s sign right up!’ No. You have to apply. (This part is boring, and involves paperwork and letters of recommendation — honest, for a 3-year-old! — so I’ll skip it.)

And then, if you make it through that stuff, you have to interview. Again, I am not making this up.

So we show up at the appointed hour, The Child looking absolutely adorable in a little black (it’s New York, people) corduroy jumper with little silver stars printed all over it. Shoes to match. (I have them stowed away somewhere, they were so cute. But since I have to go to the dentist soon, I don’t have time to search for them to show you.)

The Dude and I were perched on the couch in the Headmistress’s office, ‘chatting’. While The Child was seated nearby on the floor with a Young Female Teacher, ‘playing’.

While we’re doing our best to wow Ms. Headmistress, we couldn’t help but notice what was going on just a few feet away.

We see Young Teacher hand The Child a round plastic container full of little bears. She tells Said Child that she can do whatever she wants with them. 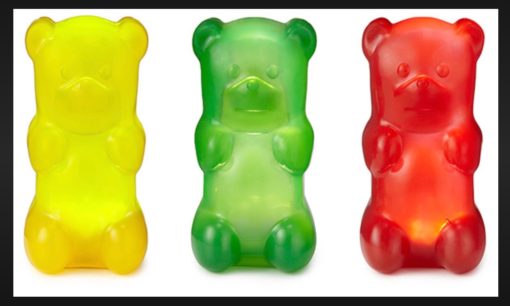 What the bears that were in the plastic container looked like

The Child dumps the bears out of the container onto the beautiful Turkish carpet, arranges them into a semi-circle, and places the container smack-dab in front of them.

We couldn’t help but overhear The Child explain that the bears were ‘watching a movie’. Good one, we think.

Young Teacher smiles, nods, then says to The Child ‘You can put the bears away now.’ To which she replies ‘The movie’s not over.’

Well. Needless to say, The Child got into the nursery school.

And, even if she did not grow up to be a Supreme Court Justice, at least she is not sleeping on our couch for a living.

Oh. Before I go. A quick note on what I was wearing during this interview. No, not a black corduroy jumper with little stars on it. (I wish.) But, since I was fully employed at the time, and since I knew I would be dropping The Child off on my way to work in the World of Advertising, I decided that dressing like an Upper East Side Mommy in a plaid skirt, velvet headband, and one of those jackets that look like a tea cozy would be rather a case of bait-and-switch.

So I dressed in what was, for the Ad Biz in the mid-Nineties, my ‘uniform’: black leather jacket, black boots, white tee shirt, and jeans. They were my best jeans, but they were, in fact, bluejeans. Levis, as I recall.

Later, when The Child was ‘in’, and Ms. Headmistress and I were Best Buds, I asked her what she thought about my outfit. She told me it was one of the things she liked best about me.

So there, Upper East Side Mommies.

14 thoughts on “‘The bears are watching a movie’”