‘The job that’s way better than being President.’

When The Child was really a child, well-meaning adults liked to ask her what she wanted to be when she grew up. Having stumbled over this very question when we were small (‘teacher’? ‘rocket scientist’? ‘cowboy’? What did this grownup want to hear? And how on earth could we be expected to make a career decision when we were only four?), The Dude and I decided to provide her with a good answer she could spit out without hesitation when required to do so.

True, a little (or perhaps more than a little) brainwashing came into play, but we like to think it was of the benign kind. Besides, we got a kick out of watching her grownup griller’s response when she’d squeak out ‘Supreme Court Justice’ in her baby-duck voice. Her questioner would be highly amused. ‘Don’t you want to be President?‘, he or she would counter. ‘Nope. Supreme Court Justice is a better job.’ 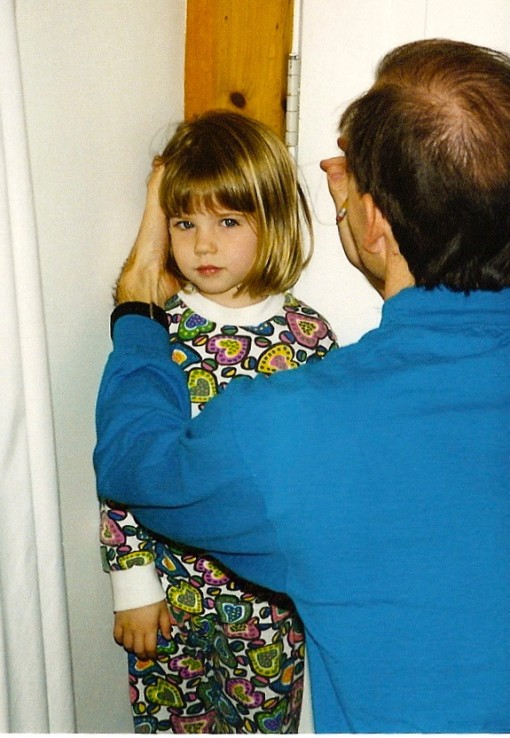 How tall does a Supreme Court Justice have to be? The Dude marks The Child’s progress (literally) on the door jamb

Just think about, and I think you’ll agree. Being Supreme Court Justice is a way better job than being President, especially for a woman. Here’s why:

Being female is no big deal. Why go through the angst of being The First Woman President, when a bunch of SCJ gals, starting with Sandra Day O’Connor, have broken the gender barrier for you?

Job security. None of this two-term limit nonsense like the Presidents have. If you’re so inclined, you can serve till you drop dead. Or, if you find yourself getting sick and tired of crafting clever arguments and wearing black every day you can retire. But you don’t have to unless you jolly well feel like it.

Dressing for work is a snap. Speaking of wearing black, no one (including you) needs to fuss over your wardrobe choices. ‘Aren’t those colors a bit flashy?’ never comes up. Neither does ‘Is she wearing that long jacket to hide her hips?’ You just throw on that big ole black robe, maybe spruce it up with a bit of white lace collar (or not), and you’re good to go. 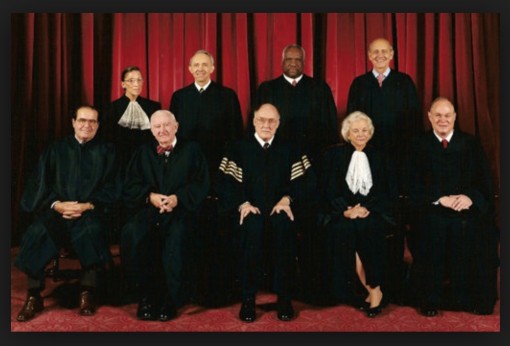 I dare you to recognize this gang out of ‘uniform’. And yes, yes, I know this isn’t the Current Court. But it’s the one that was in business when The Child was a child, so I’m sticking with it

Relative anonymity. Speaking of those robes, who on earth could recognize Elena Kagan out of ‘uniform’? (Don’t look for her in that photo; she’s not there. But trust me, you’d have trouble telling her apart from Sonia Sotomayor anyway.) This means that when you’re a SCJ, you can shop for food, go to the movies — even take a vacation — and no one disses your choices, much less follows you around with cameras.

No one cares (anymore) if you do stuff like smoke pot. This guy Ginsburg withdrew his nomination back in the 80’s when someone ratted on him about his pot use. But when Clarence Thomas admitted he’d ‘experimented’ — big snore. True, Good Ole Clarence was grilled about a whole bunch of other less-than-judicially-cool behaviors, but he still made the cut.

You might morph into a cool cult figure. There’s a book out called ‘Notorious RBG: The Life and Times of Ruth Bader Ginsburg’ that compares her to the rapper Notorious Big. They’re even wearing the same crown. The late Antonin Scalia and this same Ruth Bader Ginsburg (she’s quite the pop icon, that Ruth) even had an opera written about them.

Oh. And people hardly ever try to shoot you. (This can be a big problem if you’re President.)

You do have to give some serious thought to one thing in particular if you’d like your child to grow up to be a Supreme Court Justice. And no, I’m not talking about law school. I’m talking about your choice of name. You want to go for a bit of gravitas. The Court’s had its Sandra Day O’Connor and its Ruth Bader Ginsburg (those triple names are especially cool, Ruth’s in particular.) Somehow it’s hard to imagine little Brandy or Brie or Dakota cutting the naming mustard. But, hey. We’ve recently had a Sonia. So maybe Justice Tiffany’s not such a stretch.

Anyway. So what of The Child? Well, if she were in fact a Supreme Court Justice, or even in the running for Antonin Scalia’s newly vacated post, I’m sure you would have heard of it by now.

Nope. She grew up to be a software engineer. A choice that might not have even existed back when she was four and well-meaning folks were asking her about her future plans. Here she is, in all her company-webpage glory. And she doesn’t even have to wear a black robe.

Here she is, pretty as a pixel. If you want the whole scoop, click here