‘Dealing with the drama of domestic disaster’

Those of you who (virtually) tagged along on our recent African Adventure may recall that The Child proved her mettle in more mature ways than one. While we were away she dealt with a couple of disasters, a feline medical emergency and a fire in our building.

Well, she’s back in Cambridge now, dealing with her own (disaster-free, I hope) life, while we soldier on. Wombat’s crisis, except for the rather unfortunate bare patch that remains on her butt, has passed. 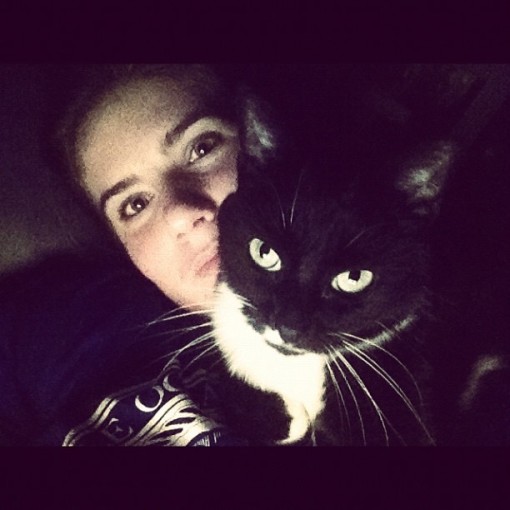 The Child and The Cat, pre-shaved butt (The Cat’s, that is)

And the fire? Well, it was electrical, started in the basement, and, luckily, stayed in the basement. Nobody sustained any injuries — nothing requiring hospitalization or butt shaving, anyway — and the damage was pretty much confined to some basement storage lockers. Where some of my neighbors kept things like wedding pictures and tax returns. Hmmm. (Ours is home to Christmas decorations and old Halloween costumes. Though I confess I’d probably suffer their loss more.) 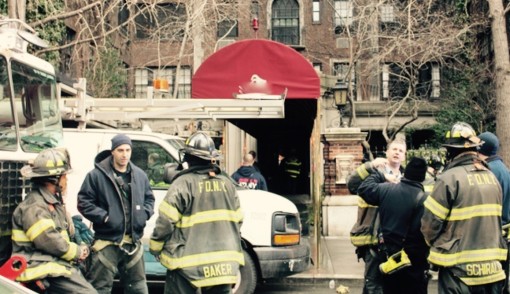 And gosh. Let’s just say that where there’s fire, there’s smoke. Lots of very smokey-smelling smoke. And it sticks around. After a couple of weeks, I honestly can’t say whether the smell has lessened, or if I’ve just gotten used to my home smelling like an ashtray — an ashtray filled with melted rubber in which somebody ground out some big ole cheap cigars.

My Oldest Younger Brother Scott was in town about a week after the fire and, Good Sport that he is, remarked that he thought our smoke-riddled elevators had an aroma rather like a fine old Scotch whiskey. Good try, Scott.

Which brings me to The Agent of Destruction, a phrase that, at least in my twisted mind, conjures up visions of some suave James Bond of the Apocalypse. But it’s really just a term the insurance company uses to refer to whatever caused the damage in any particular disaster. In the case of ‘our’ fire, that would be mostly a) the aforementioned smoke, and b) water — the water that, ironically, was used to put out said fire. 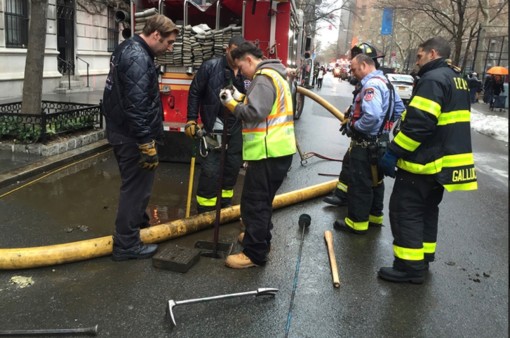 Unleashing the Agent of Destruction, i.e. the giant firehose which will spray gallons of water into our basement storage units

Speaking of basements and disasters, one time a pipe burst during a cold snap out in Amagansett and water poured into our basement for a month. Yes, a month. I can still hear The Dude splish-splash-sploshing around down there yelling ‘You’ve got to come down here and see this!’ while I quite sensibly stayed upstairs and called our Very Good Insurance Company. Who called the Disaster Cleanup Company.

When the Disaster Cleanup Company was done shoveling out waterlogged couches and warped ping-pong tables and smooshed snake cages and soggy medical books, pasted-together slides, and disintegrating family snapshots, we had four (count ’em four) dumpster loads of sad, tragic waste. I asked them if ours was the worst disaster they had to clean up after. Not by a long shot, they said. There was the house where the chimney backed up and spewed soot over and into every nook and cranny. And, waaaay worse: the house where the septic system did the same thing, only not with soot.

Yup. Our Very Good Insurance Company covered all our losses, bless ’em. Except one thing. We got this huge water bill — a heck of a lot of water can run into a basement during a whole month — a bill that totalled over 500 bucks. When I submitted this bill to the Very Good Insurance Company, they refused to pay it. See, they explained, this water was The Agent of Destruction. And, it seems, insurance companies — even very good ones — never, ever, reimburse you for The Agent of Destruction.

6 thoughts on “The Agent of Destruction”