‘The time The Dude (almost) got arrested for Childnapping’

I once took a crack at a funny story about dentistry. (You can chuckle at the result — or not — by clicking on “Is it safe?”) So I thought a humorous take on kidnapping might be worth a shot.

See, you wouldn’t know it from the idyllic father-daughter-on-the-beach photo at the top of this story, but one time The Child was screaming at the top of her lungs (in public!) for The Dude to unhand her. 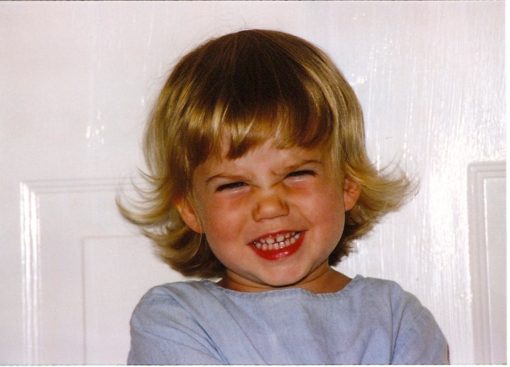 Scream her lungs out? This little Sweetheart?

We were on a trip at the time, to one of The Dude’s ophthalmology meetings. The American Academy of Ophthalmology, to be specific. This outfit holds these in a different city every year. Nowadays The Dude and I make it a point to go to the “good” cities (Yay, New Orleans and Las Vegas!) and avoid the “bad” ones (Sorry, all-paved-over Atlanta and Disney-fied Orlando). That year the meeting was in San Francisco, and it was the first time we’d go as a family. (And the last, it turned out.)

For some crazy reason we thought it would be a great idea to take the three-year-old Child along on this trip. Well, to be perfectly honest, we took The Child along on every trip to every place we went — until she was six. 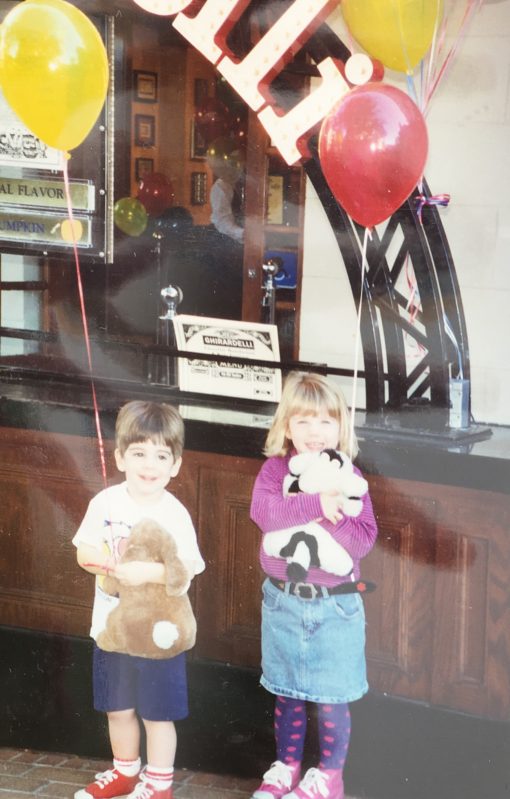 Child (with her traveling companion, Moo-Cow) and Same-Age Cousin Aaron, all behaving beautifully

Also, we thought it would be cool to get together with my Oldest Younger Brother Scott and his NoCal Fam (complete with same-age Cousin Aaron) while we were in his neck of the woods. And the parts of the trip we spent together were, in fact, pretty darned cool. We went to a Japanese tea garden and to Ghirardelli Square and on a cablecar ride. But that was later.

The Incident Of Which I Write happened on the very first day we were there. The Child and I had been over to the meeting venue itself and walked around a bit, checking out the exhibits on macular degeneration and suchlike, she toting Moo-Cow, her Animal of Choice (being a very fair-minded child, she picked a different one for each trip). And, well, so far so good. We were, in fact, smugly congratulating ourselves on well things were going, Child-wise. 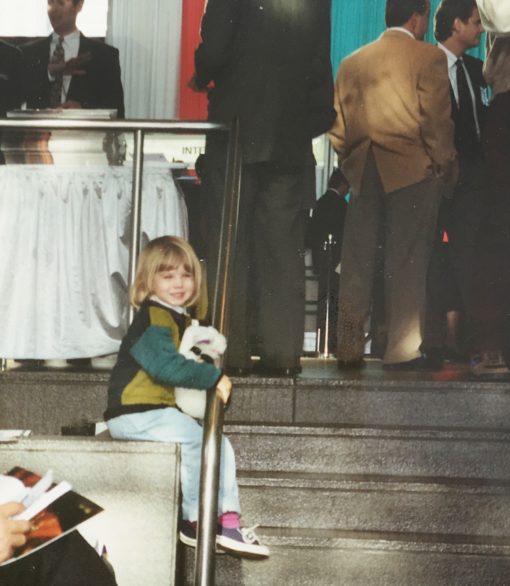 The Child and Moo-Cow behaving beautifully at the Academy Meeting. And yes, I did knit that sweater

So I guess we got sort of, well, complacent. That night we were supposed to go to a Meeting-Related Dinner in North Beach, and instead of doing the sensible thing and hiring a babysitter for the evening, we took The Child along. To be fair, the restaurant was a casual family-style Italian place (I checked to be sure), but still. She was three, for pete’s sakes. 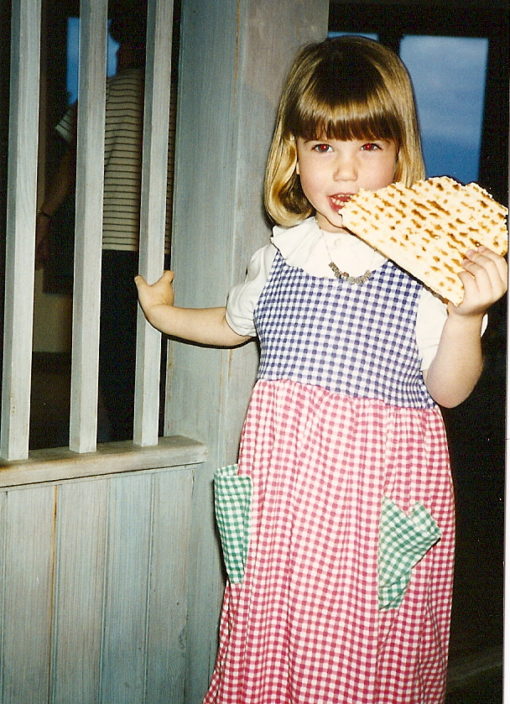 What we should have given her instead of taking her to the restaurant: a breadlike object of any kind

Not only was she just three, she was also a notoriously picky eater. Her favorite foods were bread (or anything breadlike) — and water. I guess we were banking on the fact that an Italian Place would have plenty of both.

What we weren’t banking on was jet lag.

The Dude and I were tucking into large platters of pasta and suchlike, and The Child was chomping away on a chunk of bread when all of a sudden she…just…snapped.

It was like a demon possessed her. She did that turn-herself-into-a-board Stiffness Thing, then threw herself onto the floor, where she commenced shrieking and drumming her heels.

Well. The Dude had finished his dinner (and most of mine), so he graciously offered to let me stay behind while he removed The Child from the scene — that being the only really effective way to deal with a tantrum so ear-piercingly severe. 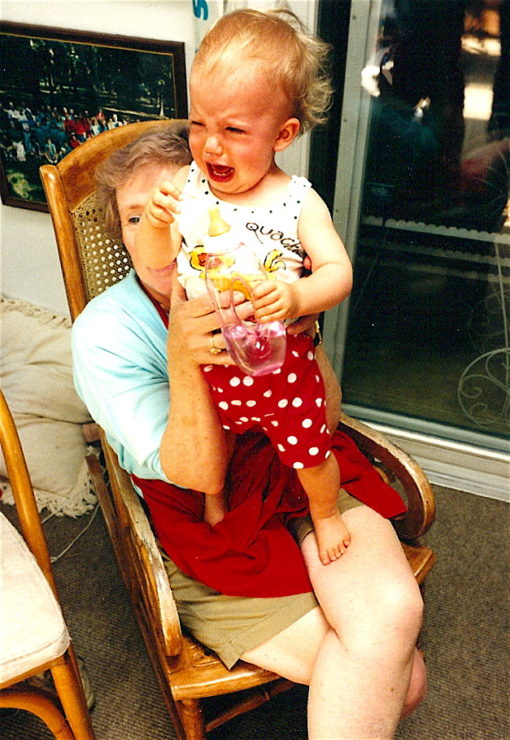 The Child, demonstrating the Stiff Baby Thing during a much-earlier practice tantrum. (I don’t have a photo of the Tantrum Of Which I Write)

So The Dude scoops up the totally-stiff incredibly-screaming Child, puts her under his arm and totes her out of the restaurant — kind of like he’s carrying a hysterical briefcase.

And there he is, walking the streets of North Beach, desperately trying to flag a cab (this was, of course, waaaaay before Uber) while The Child is screaming “Put me down!” and “Let me go!” and “I want my Mommy!”

Well. You can just imagine the looks he got. It still amazes me that a police car didn’t stop instead of a cab with a nice driver who also tried to mollify The Child, to no avail. (Driver: “I have grandchildren, let me try” Child: “Even louder shrieking”) Of course, the second The Dude got her into the hotel room, The Child was out like a light — and was perfectly fine the next day.

Which happened to be Halloween.

Here she is in the costume I concocted for her out of a kleenex and a crown. Heck, I may have been a terrible Mom who took her kid to completely inappropriate places where she had tantrums — but you can’t say I wasn’t creative. 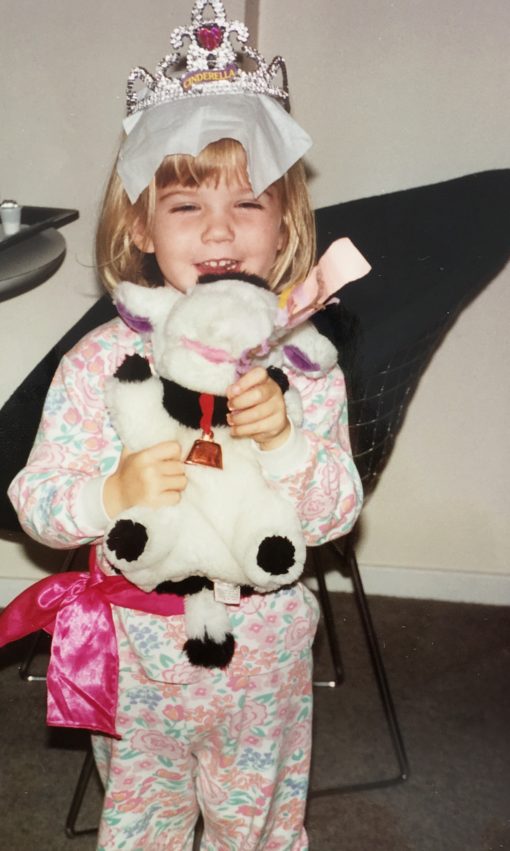 The Child, all smiles on Halloween. This was her costume. Somewhat makeshift, but she and Moo-Cow didn’t seem to mind