‘Featuring a darned good “Lutheran Lie”, if I do say so myself’

First thing Monday morning I took part in a nature walk in Central Park. Our little group was listening, rapt, to our leader, an architectural historian no less, when a rat the size of a healthy young chihuahua weaved its way between our collective feet and disappeared under an ornamental shrub. 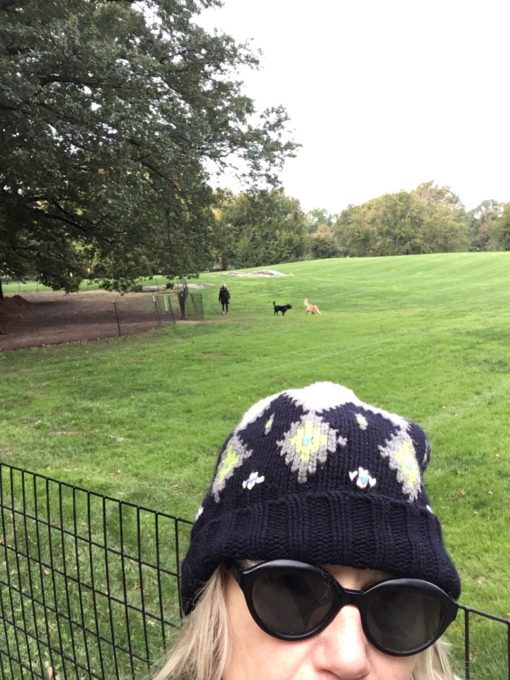 Me, the morning after my Close Encounter of the Rattus Kind. (Those are actual dogs frolicking in the background)

No one flinched. Though our leader, after a beat, did say, “They’re okay off-leash until 9:00.”

This whole blasé-about-rats thing got me thinking about New Yorkers and how we get used to just about anything. And how sometimes it takes some fresh eyes to, well, see things “fresh”.

Like the time The Child was introduced to the subway. 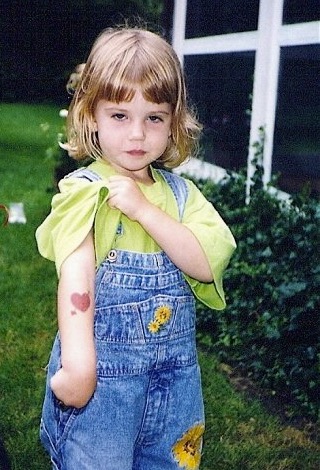 The Child, subway-ready, tatts and all

She was about three or maybe four years old at the time. Now, I realize that for some of you fellow New Yorkers out there who read my stories (bless you a thousand times), “three or maybe four” may sound rather long in the tooth for a first-time subway rider. After all, I see babes in arms — and in carriers and strollers — all the time “down there”.

But our little family had the advantage of living fairly close to all the stuff The Child needed to get to, like classes (“science” at the 92nd Street Y!) the Central Park Zoo (ahem, “Wildlife Conservation Society”) — even her assorted “playdates” (don’t get me started, but please see my piece “I’m watchin’ him!” for my views on this aspect of Modern-day Child-raising.)

And for the stuff she needed to get to that was too far to walk to, she and I — or she and The Dude, or even she and Our Caregiver — would take the bus. (Little kids love the bus. One can be driven quite mad in Manhattan, at least mid-day when I’m riding, by the chorus of little voices squeaking “The wheels on the bus go round and round” over and over and over.) 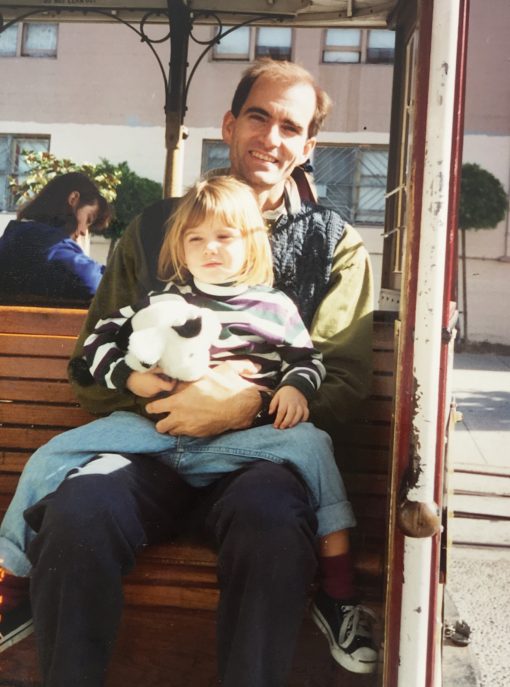 No, I don’t have a photo of The Child on a bus. But I do have this one (and the one at the top of this post) — of her on a cable car. Which is perhaps even more fun, depending on whether you’re the Child or the Parent

Also, little kids can look out the windows on the bus. “Look, Honey. There’s a policeman on a horse.” “Look, Sweetie. There’s a lady with a snake around her neck.” “Look, Doll. (Or maybe not.) There’s a man running up Second Avenue wearing only fishnet hose and sneakers.” All actual bus-window sightings, I might add.

Oh, sure. The subway does have windows, but there’s not much to look at except other subways whooshing by. Which actually is pretty cool, come to think of it.

But I digress. Back to The Child and her first subway ride.

I was working in advertising, literally on Madison Avenue, since that’s where DDB/Needham was at the time, when I was invited to a party by one of my colleagues. A party where children were invited. (Trust me, this hardly ever happens in the world of advertising. Or at least not back in the crazy booze-and-controlled-substance-fueled days when I was in it. So how could I refuse?)

This party was to take place down in SoHo. And the best way to get to SoHo from Madison Avenue, or just about anywhere in New York City, actually, unless you happen to be in SoHo already, is by subway. 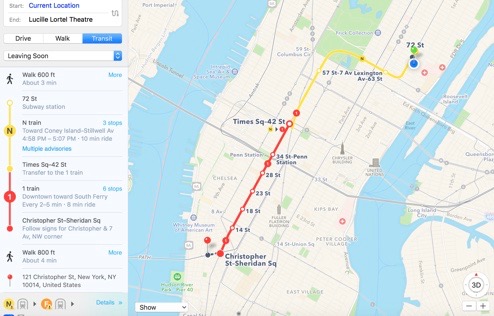 How New Yorkers get around — to The Village, in this case. Which is equally as subway-a-rific as SoHo to this Upper East Sider

So I get Our Caregiver to bring The Little Cherub (AKA The Child) to my office, where I tell her we’re headed to the subway.

“What’s the subway?” she asked. (Seriously; I guess all her Little Friends walked and bussed everywhere too.) “It’s a train that runs under the ground” I answered. “Under the ground? Doesn’t dirt get in it?” “Well, um, yes. Actually, it does.”

We get to the subway entrance and descend. It really is a “hole in the ground”, as the song “New York New York” would have it. The Child is fascinated — staring with wide little child eyes at everything: the buskers, the panhandlers, the hapless crowds of exhausted commuters. She’s thrilled when I let her put the token in the slot in the turnstile, since this was well before MetroCards. (Gosh, Child, you’ve reached the age when you can do that “way back when I was a kid” thing!) 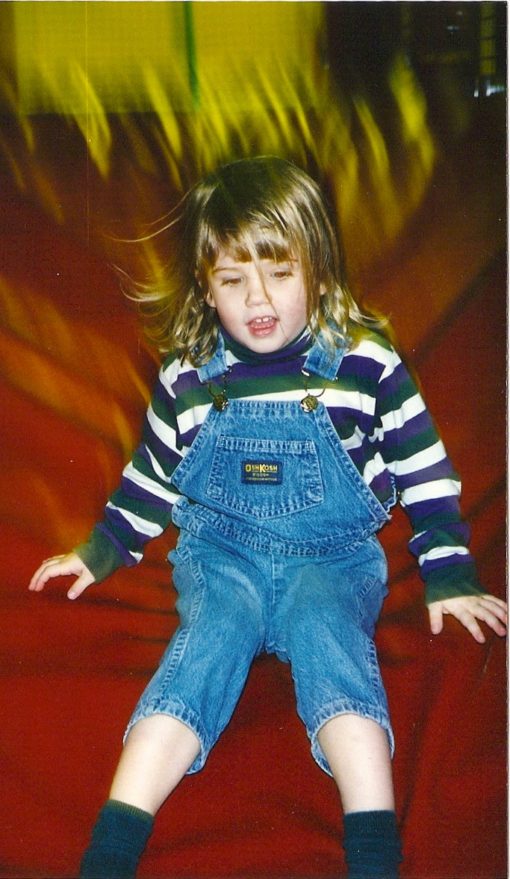 The Child, “way back when”, on a slide. No, it’s not a slide that goes into “a hole in the ground”, thank goodness

Did I mention that it was Rush Hour? Now Rush Hour in Manhattan is not nearly as bad as those pictures you’ve seen of Rush Hour in Tokyo, where guys in uniforms push people onto the crammed cars with white-gloved hands. But it’s pretty close.

And, speaking of close, that’s how we’re “arranged” on this subway car — once The Child and I squeezed our way onto one, that is. We’re so tightly packed together that you didn’t really need to hang on to a strap (they had those then, too). The mere proximity of your neighbor kept you upright.

But, even though this subway car was packed tighter than Vienna sausages in a can, it was quiet as quiet could be — everyone was in his or her little New York After-Work Bubble, just hanging in there till they could get home already.

Except for this one little baby-duck-like voice that kept piping up. Yup, it was The Child. And she had a lot of questions. “Why isn’t anybody smiling?” “They’re busy thinking, Sweetie.” “Why does it smell so bad?” “Because you can’t open the windows, Bunny.”

And the Best Question of All, asked when she spotted a noisily-snoring man zonked out, covered with newspapers, and occupying four subway seats while everyone gave him as wide a berth as possible — “Why is that man sleeping?”

Well. Here’s where that Lutheran Lie comes in. All faces expectantly turned to me as I explained, in best Mommy Fashion, “Well, Sweetheart. It’s been a long day. And people are very tired from working.”

No one flinched. But I did get some pretty good smirks. 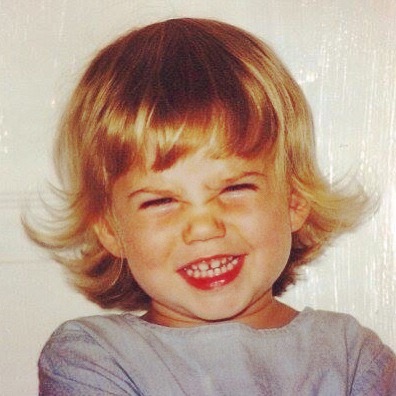 Is this the face of a Child ready for a lesson on The Homeless? Well, pardon me, but I didn’t think so. Lutheran Lie to the rescue. (If you’d like an explanation, check out “Lutheranliar explained”)

21 thoughts on “The first time The Child rode the subway”