‘Mommy hit me with a plate’ and other dental tales

So. I was toying with an idea for a post involving Helen Mirren, whom I adore. But I’m smack-dab in the middle of getting a crown (and I don’t mean the royal kind), and dentistry is, understandably, on my mind. So Helen will just have to keep. Shouldn’t be a problem. She’s done very nicely so far (see awesome photo for proof):

Too bad we can’t see her teeth.

Speaking of which. I am more than relieved to report that my crown-building is in the capable hands of my Dentatherapist. I call him that because he is not only skilled at Tooth Stuff, he’s gentle, soft-spoken, and a good listener. (Me: ‘Ouch!’ Dr. B: ‘Let me numb that a little more.’) Suffice it to say that he in no way resembles Lawrence Olivier in “Marathon Man’. Oh, and his fingers aren’t too fat.

Dr. B thoughtfully avoids tuna and onions, at least on days when I’m in the chair. He also avoids telephone calls while I’m in said chair (My last dentist yakked away with his phone stuck under his chin and his hands in my mouth.) But most importantly, he never forgets that I am Absolutely Terrified.

But then I am Absolutely Terrified of everything even remotely medical. Which is odd because my Mom and Aunts were nurses (Very stiff-upper lip, those Nurses! Mom: ‘Here let me just yank that loose tooth out for you.’ Me: Running, hiding, etc., etc.)

I’m scared of blood tests (natch), eye exams (I fainted once when The Dude, who is a very kind, very gentle, ophthalmologist, tried to examine ‘the inside of my upper lid’ (think about that for a sec), and, um, gynecological exams. (Well, duh!)

Quick aside here: Don’t you love how the people on the other end of the needles and pointy-pokey (or even just COLD) hardware say things like: ‘This may pinch a bit’ (translation: ‘This is going to hurt like hell’) or: ‘You may feel a tingling (‘tingling’? Make that ‘burning’) sensation’. Or, my favorite: ‘Some people experience discomfort during this procedure’, as if to say ‘Some wimps with no backbone at all whine when I do this’. Well, that wimp would be me.

I did have an ‘A-hah Moment’ once while sweating it out in the waiting room of either my Dentist or Gynecologist. (Could have been either one; both trigger my flight-or-fright response equally.)

See, at least in my experience, the two doctors that women see most are 1) their dentist, and 2) their gynecologist. Wouldn’t it be swell to get both visits over with at the same time? So I invented a new specialty called ‘Dentacology’. One visit. Chair that tilts both ways.

But back to the quote that opened this story: ‘Mommy hit me with a plate’. When my brother Scott was a tyke, he got very excited about something, as young kids are wont to do (I just love the word ‘wont’, don’t you?), and ran into the kitchen to tell our Mother all about Whatever It Was.

Just then our Mother was in the process of drying dishes and putting them away (We kids were still too small for Dish Duty). So she spins around, plate in hand, just as Scott comes rushing in. As (bad) luck would have it, Scott was small, but just tall enough to connect with the plate face-first. And just look at that face (!) — 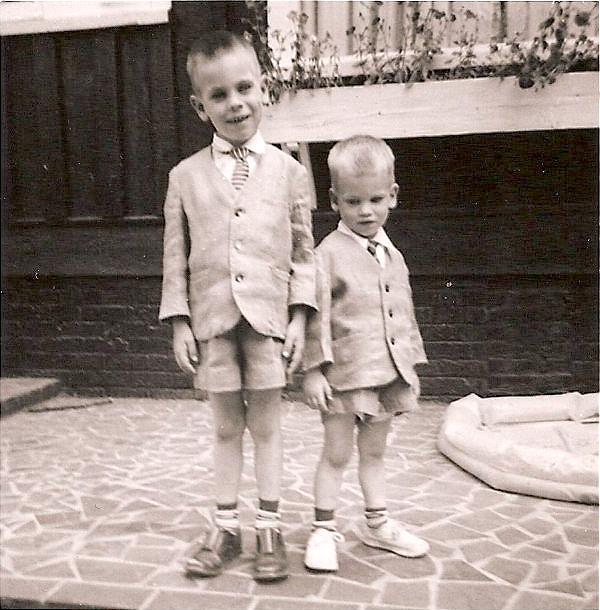 Scott (left) and Roger shortly before Scott’s front tooth connected with a (clean, but still) plate

My Mom (understandably) felt horrible about this. She took him to our dentist (who lived across the street with his very nice family, including a son who later became a Tattoo fanatic and nude sketch artist; fodder for yet another story).

Anyway. Dr. P takes a look inside his mouth at Scott’s poor cracked tooth and asks, ‘Scotty! How did this happen?!’ To which Scotty replies, ‘Mommy hit me with a plate.’

Those were the days, huh?

Oh, incidentally. More about that picture of the two adorable boys (wearing suits our mother actually made for them for Easter). It was taken during the period that Roger (the smaller of the two) had the Roommate named Bob. If you missed that story, you might want to check it out now.

And next week? We’ll deal with Helen. But not her teeth. Stay tuned. And thanks again for reading.