‘Waking up to Mo(u)rning in America. Trumped’

When life hands you lemons, you make lemonade. But what do you do when life (or, er, almost half of your fellow Americans) hands you a Big Ole Orange? Well, you can weep or rage or march. You can tear at your clothing or hair. You can move to Canada or even threaten to secede from the Union. (Bye, California, including Oldest Younger Brother Scott in Petaluma; just don’t take Mom with you.)

And sure, you can look for a way to try to squeeze a little orangeade out of that Big Ole Orange. Here’s a way that involves squeezing a trigger. (No, no. Do not call the Secret Service; this is perfectly-harmless-yet-remarkably-satisfying paintball, folks. And, yes, The Child approves the use of this message.) 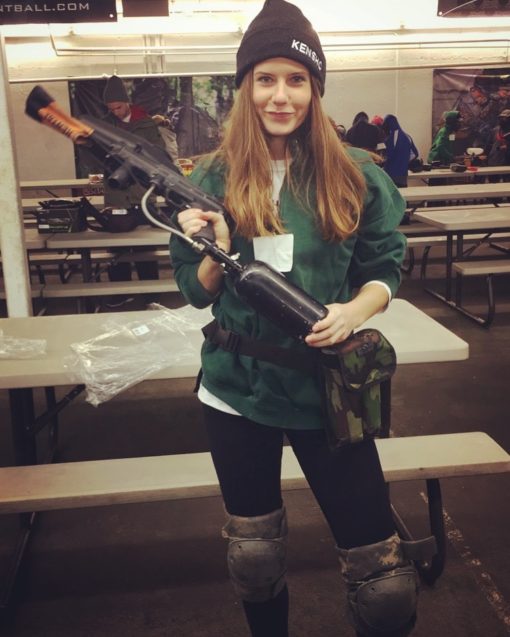 Caption to this pic on The Child’s Instagram feed: ‘Good way to let off steam after a tough week #stillanastywoman’

And of course you can indeed toss off a few Manhattans. I chose this other favorite beverage this time because I’ve already ‘done’ Martinis. You can read about my cocktail adventures in ‘Three, and you’re under the host’, in case you missed it or just want to bail already on this Trump post and skip right to drinking. Reading about it, anyway.

Another, less alcoholic way — though possibly equally addictive — to cope with the prospect of a President You-Know-Who (See? Like Biden I can’t bring myself to say it either) is to join in this latest craze: the Obama/Biden memes. Here’s one: 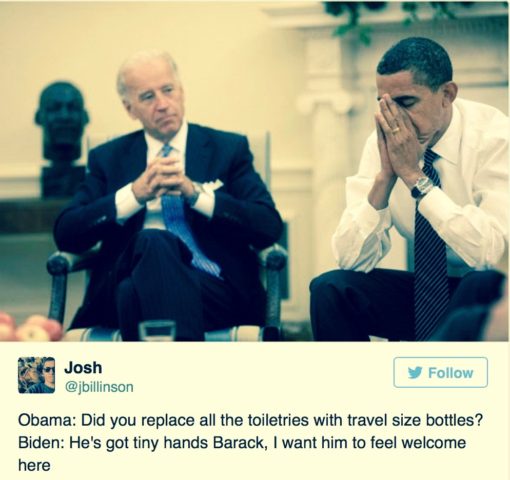 Now, if you aren’t sure what a ‘meme’ is, don’t be embarrassed. I didn’t know till The Child explained it to me. (If you don’t have ready access to a Twenty-Something, feel free to click on the word ‘meme’.) Lots of memes get started on twitter. Like the ones I’m sharing here, which feature actual photos of Obama and Biden, but with made-up conversations. (Don’t miss the one at the top of this post too.)

See? Somebody on Twitter used the very same picture, as the one above, but tweeted it with this caption instead: 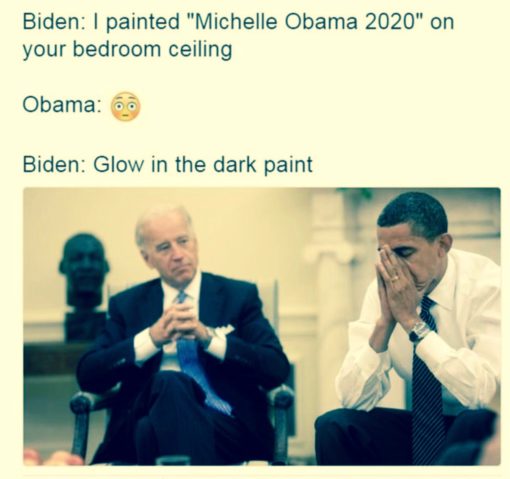 No matter what side of the political (or Mexican) fence you happen to be on, you’ve got to admit these are funny. Here’s another one worth at least a chuckle. Because hey, why not? Better to light up with laughter than curse the darkness of the Orange One. Or something like that. 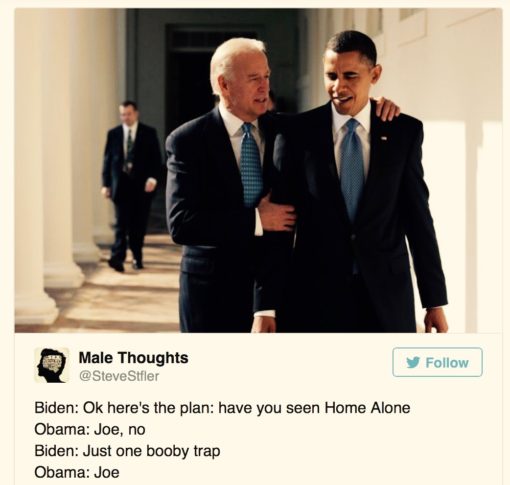 All right, one more. This one features a different photo, and also that annoying Abbreviation Thing Texters and Twitterers do (‘pls’ is ‘please’, BTW): 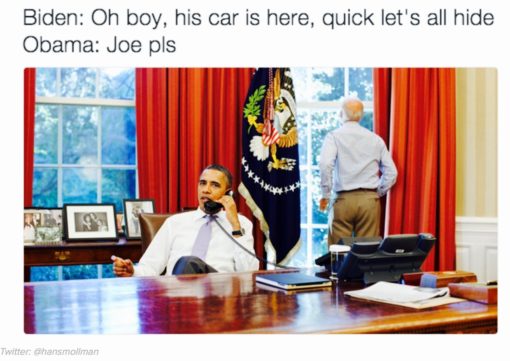 Fun, huh? I’m feeling better already, aren’t you? This kind of thing can get so popular — like with these Obama/Biden Buddy Ones — that eventually, even the memes become the subject of memes. So here’s really ‘one more’. (They’re like salted peanuts; hard to stop at just a few.) 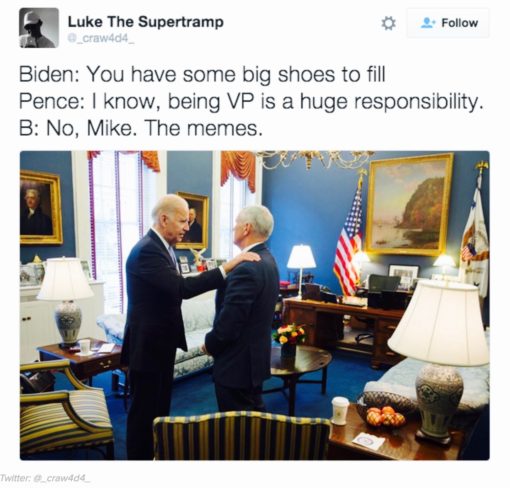 Speaking of Twitter, you probably know that The Donald, even before he became our 45th President-Elect, was known for his compulsive tweeting. His twitter feed became an outlet for all Thoughts Trumpian, prompting his handlers to take it away from him in the days leading up to the election — reminding me of the time(s) when my Mom would take away my Second-Oldest Younger Brother’s squirt gun. I’m not sure if Trump’s Guys put his twitter feed on top of the refrigerator, though.

Here’s a sampling of his feed (which is, basically, a big ole list of his tweets, or messages to his fans). ‘Very unfair!’ he comments about protesters. And then ‘Melania liked Mrs. O a lot!’ These are actual Trump Tweets, not clever internet memes. And they are not funny. Nope! 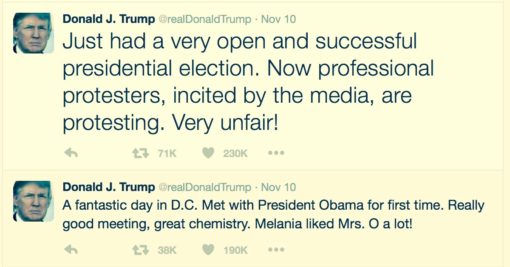 It’s kind of ironic, actually, Big Tweeter that Trump is, that Twitter’s where all those Obama/Biden riffs got started and turned meme-like, don’t you think?

Well, I’m running out of valuable blog space, and I’m saving something special for the end. But you can find tons more of these memes by clicking the Huffington Post and BuzzFeed. Heck, even the BBC has posted a bunch of them. Which is kind of the point, meme-wise, I guess.

So here’s the Cool Thing I’ve Saved for The End. It’s a little something that pays tribute not only to the loss of the presidency, but to the loss of Leonard Cohen, who died the day before Dooms (er, Election) Day.

This too went ‘viral’ on the internet, so you may have already seen it. No matter. It’s well worth watching again. Get out your handkerchiefs, it’s Saturday Night:

12 thoughts on “Laughter is the best medicine. Well, except for maybe a manhattan.”