I’ve said it before and I’ll say it again: politics really has no place in LutheranLiarLand. But these are, as that Chinese curse would have it, ‘unusual times’. Which means I’ve broken my rule once or twice. So sue me. (See ‘The Boss Who Got Banished to Belgium’ and ‘Libertarian Blonde’ for recent examples of quasi-political straying.)

But today is Election Day. Finally. I figure I’ve got very little to lose by venturing out on that Political Limb. Most of you have already made up your minds — or even voted already. (If you haven’t, please stop reading this right now and get out there! Unless, of course, you’re planning to vote for the Orange Guy, in which case you can keep right on reading. In fact, why not read all 135 of my posts? Maybe, just maybe, you can finish before the polls close.)

But back to the point of this post. Besides the obvious Donald Dig, did you notice the bridge reference? No, not like George Washington Bridge. Bridge as in the game of bridge. Lessons in which I am taking. Learning bridge is hard. So hard it makes my head spin around and smoke come out my ears. Kind of like what happens when I watch Donald in a debate.

So why take bridge lessons, you ask? 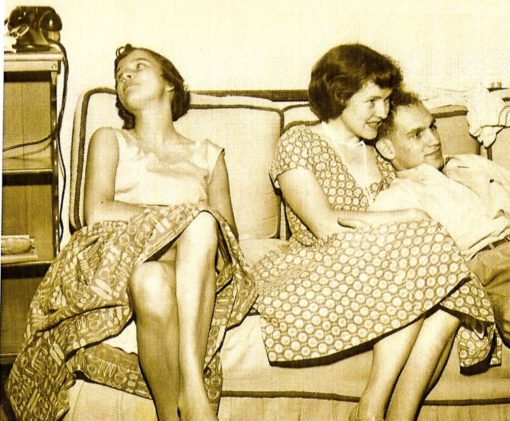 My parents, on the right, looking cool and agreeing on their bridge conventions. Or something

We Henry kids — at least we Big Kids — got to stay up late on those nights (later than 8 o’clock, anyway) and help out. We’d keep the little bowls filled with all the Bridge Mix we didn’t eat. (We’d also drain the cocktails when clearing the tables, but wouldn’t you?)

So anyway. I grew up associating the game of bridge with Adult Fun. I also remember my mom saying that every time she and my dad moved to a new town, which happened more than once when I was small (Champagne, Memphis, even Someplace in Kentucky), she would join the Bridge Club and make new friends. And not that I don’t have friends (I do), but who doesn’t want more friends?

So when a chance came to take lessons and learn how to play, I thought ‘Why not?’ I’d played my share of rummy and poker and hearts and even pinochle. Which has a different deck.) I was no card ‘dummy’. So how hard could it be to learn bridge?

Well. Let me just say that when I naively walked into that first class, I had absolutely no idea I’d be expected to not only add up high-card points, figure out if my hand was balanced, and count trumps (not the Donald-spawn kind), but also learn about a zillion conventions. Which are not (not in non-election years, anyway) ways to choose candidates to argue about for what seems like years, but ways to bid so that your partner knows what’s in your hand. Or something like that. If you really want to know, you can read about them here.

So. There’s the Gerber Convention, and the Blackwood, and Michaels, and Stayman, and Lebensohl, and the Jacoby Transfer, and the Astro, and the Herbert Negative. There’s even one called the Impossible Negative. Which is kind of how I feel most days about bridge, not to mention Orange Trump. 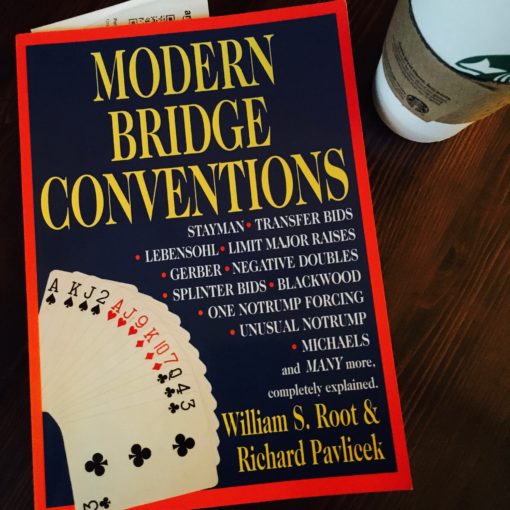 So many conventions, so little time. One of my dozens of bridge books, procured with the best of intentions

But my favorite convention, so far anyway, just has to be the Unusual No-Trump Overcall. When our poor beleaguered instructor (‘Shhhhhh, no talking!’ ‘Pay attention’) mentioned this one last week, I couldn’t help muttering ‘Oh, you mean like the Artist Formerly Known as Prince?’ She didn’t laugh. She is, however, fond of telling us that we’ll learn all this in ‘about ten years or so’, which doesn’t make me feel much like laughing.

Sort of like the prospect of a President Trump.

But enough about His Orangeness. Do I have a pun for Mr. T’s opponent? Silly of you to ask. Here goes. My hometown, Carlyle, is in a county named ‘Clinton’. Which means I’m from Clinton County. Or at least today I hope it turns out that way.

Oh, and just so I don’t get accused of color-bashing, I’ll leave you with this photo with decidedly positive orange vibes: 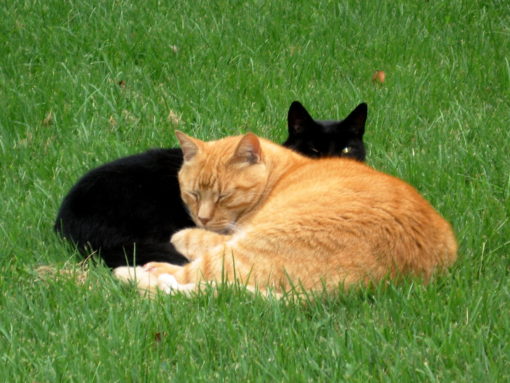 That’s belated, beloved — and very orange — Mango, hanging out with his buddy Obama

8 thoughts on “Time for the Unusual No-Trump Overcall”