‘Part One: Have script, will travel’

Remember ‘Rosemary’s Baby?’ Of course you do. Remember that scene where Roman and Minnie Castevet, Rosemary’s creepy-nice Dakota neighbors who are really (spoiler alert!) witches, invite Rosemary and Guy over for cocktails?

Well, Roman (nice naming job there, Roman Polanski) gets to talking about his travels: ‘Name a place! Go ahead, any place.’

So Guy gamely goes, ‘Dubrovnik (or someplace like that)’ To which Roman says ‘Ah, Dubrovnik! Wonderful place. I’ve been there.’ 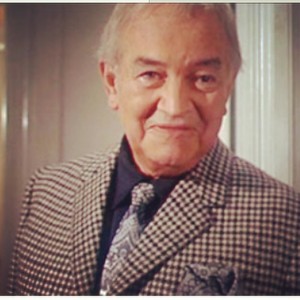 Hey, Roman. I’ve been where you’ve been. But on Somebody Else’s nickel

Well, hah! Name a place, and chances are not only have I been there, I didn’t spend a dime of my own money to go. In fact, I was paid to go there!

Welcome to yet another wonderful thing about the wonderful world of advertising. At least, when I was in it. We used to travel all over the darned world shooting commercials. Everywhere!

And it didn’t have to be a glamorous product to shoot in a glamorous place. It was (big surprise) all about money. If it was cheaper to shoot in Paris, well, we shot J & J skincare in goldarned Paris. You didn’t even have to write the Eiffel Tower into the script. In fact, my very first foreign ‘location’ was a studio in London where we shot a bowl of frosting being made with Hershey’s Cocoa. That bowl could have been in Detroit. But it wasn’t; Detroit was too expensive.

So, in addition to the aforementioned London, I got to go to places like Milan (for Dentu-Creme, honest), Australia (Kimberly-Clark), and South Africa (where the pic at the top of this post was taken; Huggies Diapers). I’ve also been to scads of exotic domestic hotspots like Flagstaff, Pasadena, the Mojave Desert, Upstate New York and suburban New Jersey.

One time The Dude and I were on the way to a cousin’s ranch somewhere high up in the High Sierra. We were smack-dab in the middle of nowhere when I go ‘Oh wow, I know that gas station. I shot a commercial there.’ 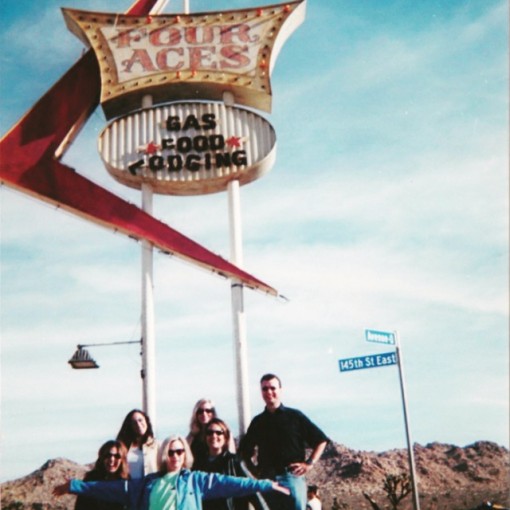 Me with a gaggle of shoot-goers in front of the gas station in the middle of nowhere. Read on to find out why it was hissing.

You can bet I’ve got some stories about those shoots, no matter where they were. Here’s one that happened when we were shooting in Paris (that J & J skincare brand I mentioned). It was a ten-day production with a huge budget, dozens of gorgeous models from around the world, and a nice-but-newbie client. The very first shoot day, we pulled up to the Bois de Boulogne, where dozens of vans and trucks were parked, huge arc lights were blazing, and scores of people were milling about with bullhorns and wardrobe racks and the like. And the client goes ‘Oh look! Somebody’s shooting a movie!’ We go ‘You are, David.’ Poor David. I thought he’d choke on his baguette.

Of course I’ve got more. (Just wait till you hear about the Mojave Desert—that one’s getting its very own post.) But here’s what happened at that gas station. It was a kind of ‘rest stop’ with a diner and a sort of ‘no-tell motel’. (We swore that Room 4 was a crack den.)

We were just ‘wrapping’ (finishing) when this PA (‘Production Assistant’: someone, usually young, who gets paid practically zilch to do thankless errands in return for being able to say he/she was a PA) directed our attention to a curtain right behind the banquettes where we’d been shooting. He parts the curtain to reveal a room literally crawling with snakes. It was glassed-in, but still.

That meant that, mere inches from where our actors had been fake-eating in a kitschy red leatherette booth were hundreds of snakes. It’s a wonder the hissing didn’t mess up our sync-sound.

I’m going to end this with a pretty good New Jersey Shoot Story. (More shoot stories, including The One About the Jellyfish in Australia and The One About the Transgender Teamster in LA, will coming soon, or whenever I feel like it, in Part Two.)

Anyway, New Jersey. When you see a commercial that’s set in a nice normal house, chances are that house is in New Jersey. (Unless you are seeing a green lawn around that house and it’s wintertime. Then the house is in California.) In fact, the same houses tend to get used over and over. Pay attention, and you’ll notice this. Anyway. We were at The New Jersey House for, probably, a cereal commercial.

Now here’s the thing about shooting at a house. Unless you’re part of the actual crew, you don’t get to go into the house. Not for meals. (There’s a truck that comes, promptly, for breakfast and lunch. Sometimes even dinner.) Not for snacks. (There’s a table for ‘craft services’: basically all the junk food on the Planet Earth, plus some fruit.) Not even to go to the bathroom. No, you get to go into the production trailer that’s set up in the driveway of the house.

So. One morning, we’re all sitting around in our directors’ chairs outside The New Jersey House. It’s the Team (producer, writer, art director), plus the account guy and the client. We’re sipping coffee and whatnot when the client grabs the New York Times and heads into the trailer.

A couple of minutes go by, and we notice a trail of something trickling down the driveway. A horrified (and probably soon to be ‘ex’) PA rushes over and makes the mess disappear. Turns out he’d forgotten to hook up the trailer’s toilet.

Pretty soon the client came out of the trailer, whistling a happy tune, still clutching his newspaper. Thank goodness he never found out. Unless, of course, he reads my stories.

To be continued. But if you just can’t wait, you can indeed check out that story about the messed-up sound on the Country Time Shoot (peacocks and rain were involved) in ‘The Most Fun You Can Have With Your Clothes On’. And here’s another good one about a shoot in Upstate New York, called ‘Old MacDonald Had a Silo.’ Oh, and about those snakes. Read ‘Year of the Snake’ to see how, in an alternate universe, The Child would not have existed.