‘The Mojave was hot; the Best Western was not’

Every time I’ve considered whining about the heat this particularly-hot Northeastern Summer, I remind myself of the August I spent shooting a Pantene commercial smack-dab in the middle of the Mojave Desert.

I can hear you now: ‘Deserts aren’t so bad; after all, it’s not the heat, it’s the humidity‘. Well, let me tell you — and this is coming from a girl who grew up near St. Louis, where hapless souls from the British Foreign Service got hazardous duty pay on account of the steamy summers — ‘Uh-uh, in the desert, my friends, it most definitely is the heat.’

Okay, you’re probably wondering Why On Earth anyone would shoot a shampoo commercial in the middle of the Mojave Desert at all, much less in August.

Well, let me digress a moment to tell you that shooting hair is notoriously tricky. You get your flyaways, your frizz, your fluffy nimbus (nimbi?) When it comes to hair, it truly is a case of ‘it’s the humidity‘. So, if you don’t want humidity (and if you have the good sense the creative gods gave you) you shoot the darned stuff in a studio. Or you drag everyone — director, cameramen, gaffers, PAs, craft services, creatives, models, and even the clients — to the Mojave Desert.

Now I must confess that I had something to do with this decision, being part of the Creative Team and all. See, we had this idea to illustrate the virtues of Pantene using, um, metaphor. One commercial had a girl twirling a hula hoop by the side of a pool to the strains of ‘Let’s Twist’ (check out Chubby Checker’s version here) while her glossy curly Pantene’d hair twisted and bounced appealingly. In another, a girl loped across a Marlboro Man-like landscape trailing hot-air balloons to ‘Up Up and Away’. Pool. Marlboro Man landscape. No studio; not this time.

In, like, February, when we pitched this idea to the Pantene People, the Mojave Desert idea sounded pretty good. True, the Client Cogwheel can turn rather slowly. But months later, when we got approval to shoot, do you think it occurred to anyone to say, ‘Hey, maybe it’s not such a great idea to go to the Mojave Desert now.’ (?)

Nope. There we were, in August, checking into the fanciest hotel in the greater Mojave Desert area, the Best Western Desert Winds. Its tea-towel-sized bath towels, transparent face cloths, miniature bath bars of Ivory Soap, and, most egregious of all, its immovable nailed-down bedside lamps soon led us to dub it the ‘Not-So-Hot’ Western: 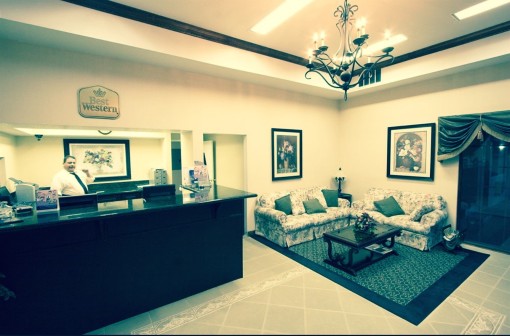 The lobby–and swankiest part–of the Not-So-Hot Western. Coke Machine, and Reservist, just outside.

Now, the Mojave Desert is not one of your most popular tourist destinations at any time, but especially not in August. So we were surprised to find the Not-So-Hot at full capacity. Turns out that the Mojave is a popular spot for staging military maneuvers. So our motel companions were indeed military reservists of all stripes (and camouflage patterns). 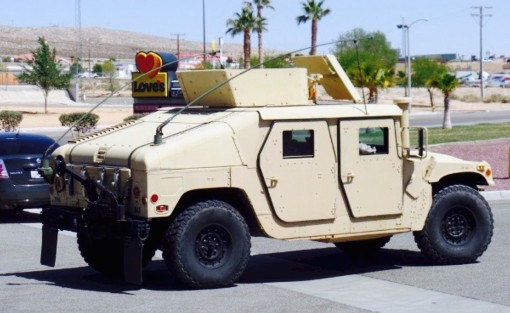 One of the other vehicles parked in the Not-So-Hot Western parking lot. Except this one probably wasn’t a rental.

Even though we checked in at the coolest part of the day (evening), I decided it might be nice to take a swim. Once I unlocked the super-secured chainlink fence (who did they think was going to break in? Saddam?) and dipped a toe into the spit-temperature water, though, I decided a frosty beverage might be a better idea.

Aha, there was the Coke machine. Right behind that camouflage-clad reservist. (Almost didn’t see him, ha!) I watched him feed a dollar bill into the money slot. It slid back out, so he fed it in again. Same thing happened. Well, I figured the machine was out of change, so I headed into the lobby to get some.

I returned, politely asked the reservist to give me a shot at the machine, fed in my change, made my selection, and voila! Clutching my hard-won Diet Coke, I mildly suggested the reservist might want to get some change himself. He looked at me, nodded, and went right back to feeding the dollar bill into the machine. He’s probably still there.

Next morning at 5:30 we headed out to the dried-out prehistoric lake bed that was our location. We had to go early so that the crew could do their setup work with minimal stops for fainting. Being on location here kind of reminded me of one of those New Yorker cartoons — you know, the ones with the guy dying of thirst crawling through a desert sprinkled with cactus and dead cow skulls. Except there was no cactus (not enough water). I don’t know about the cow skulls.

Add a camera, a girl in a ballgown holding balloons, and some fainting crew members, and you’ve got our location.

I’m actually not sure how hot it was (and kind of scared to find out). There was a thermometer; it was under the tarp that served as the Medic Tent. That thermometer read 125 degrees. But it only went to 125 degrees. All I know was it was so hot that there was one PA whose only job was to roam around the set with a bucket filled with water, ice, and bandannas. You took a cold wet bandanna and put it on your head. Once it got hot and dried out (in, like, two minutes) he brought you another one. (For an explanation of what a PA is, and some great examples of what they do, see ‘Around the World in 80 Shoots’.)

But still. Even with the judicious application of cold wet bandannas, people were fainting and dropping like flies. Once we heard someone call ‘Medic!’, only to hear ‘He’s passed out in the Medic Tent!’

And the poor girl running across the hot landscape dressed in the hot ballgown and trailing the hot-air balloons? She was saved from fainting (just barely) by having access to the one air-conditioned trailer. Though she did have to share it with Wardrobe (danger of wrinkling) and Makeup (danger of melting). And sometimes they’d let the client in there too (danger of firing).

We all survived, of course. And lived to shoot another day. Oh, remember that girl in the hula hoop by the pool? Her job wasn’t so easy either. She was lovely, of course, with incredibly gorgeous hair (natch), but spoke in a charming-but-almost-unintelligable accent (which is why most of the time these girls did not have speaking parts, at least not in Pantene commercials). Well, she spotted an amphibian swimming near her in the pool, jumped an unscripted mile and shouted ‘O no! Get eet away! I am homophrog! I am homophrog!’ 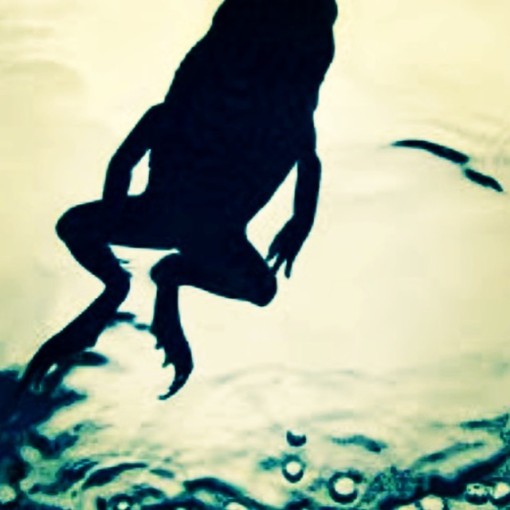 The Phrog. Which actually does look pretty scary, at that.

9 thoughts on “Pantene, Queen of the Desert”