‘The time I was mugged on my way to Thanksgiving dinner’

I did a little calculating this week and realized that this will be the 25th time I’ve hosted Thanksgiving dinner out here in Amagansett. 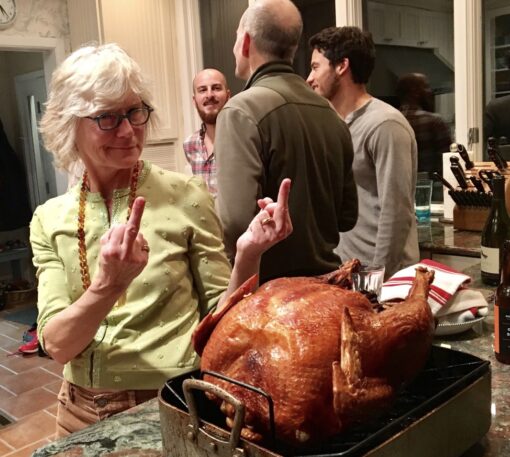 Flippin’ the Bird at one of those 25 Flippin’ Feasts

Yup. My first turkey and fixins’ for a crowd was in 1995 — when the “crowd” was my Mom and my Dad and The Dude — and The Child when she was an actual child. There may have been Others here as well. If so, it would have been our Same-Age-Best-Friends, J and P. I’ll have to ask them. They (of course) will be here this year. 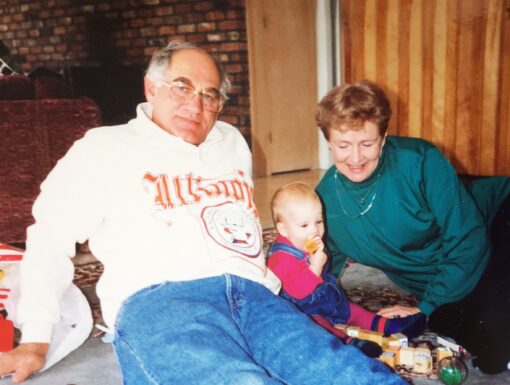 An even-earlier Amagansett T’giving, when The Child was so small that we tied her to a kitchen stool with a bathrobe sash, having no high chair out here at the time

If you’re good at math, you’ve no doubt found a discrepancy in mine. “But every Thanksgiving since ’95 makes 26 times, not 25,” you might be thinking. And you’d be right. One year (2009) I was persuaded to skip the Amagansett Thanksgiving because The Child, who was a college freshman at the time, wanted to have Thanksgiving in the City so she could see her friends. 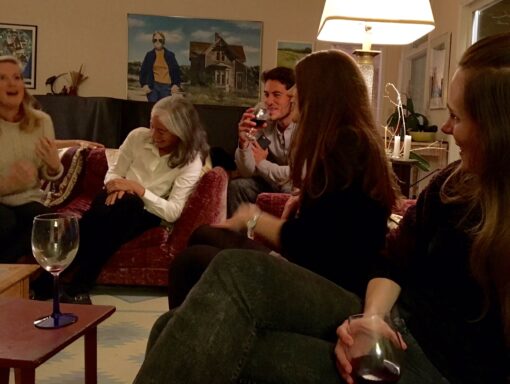 Speaking of “seeing friends,” here’s a batch from a few Turkey Days ago

Well. That year we enjoyed a perfectly-nice (but rather sedate) feast at Wayne’s Club. But The Child was fruitless in her attempts to connect — turns out all her friends were celebrating in away-from-the-City family hoedowns of their own. 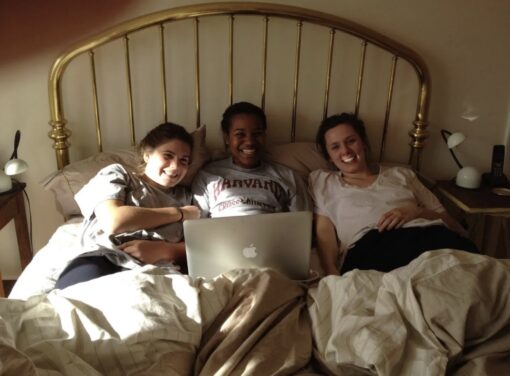 Lesson learned: if you want to see your school buddies over T’giving, invite them here

“Enough with Turkey History. What about that mugging?!?” you no doubt are asking about now.

It happened on my second Thanksgiving in the City. The first one, in 1979, was spent at a fellow writer’s apartment. I didn’t even work for (or even with) this guy, but this respected senior writer named Peter H. — who, incidentally, died earlier this year — asked some of us young Ogilvy “strays” to join him for the feast. I remember being very impressed, both with his hospitality and his sumptuous apartment.

By the time my second New York Thanksgiving rolled around, I’d made some same-age Ogilvy buddies, including Fab Friend Sande — she and I once were found “resting our heads on the nice cool tile” in the ladies room of Michael’s of Santa Monica during a particularly lavish L.A. shoot dinner. (More about this shoot — and our zany boss Harvey at Michael’s — in “The Most Fun You Can Have with Your Clothes On.“) 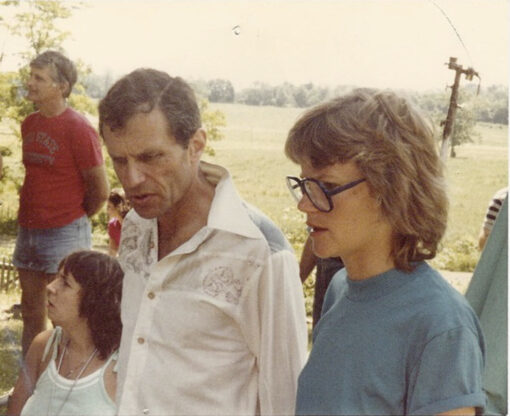 Harvey of Grilled-Half-Goathead Fame and I on set somewhere

Sande had just bought a coop — pretty sophisticated for our set — and was hosting Thanksgiving for a group of revelers including her mother and her brother Victor. Each of us invitees volunteered to contribute something; I had Salad Duty. 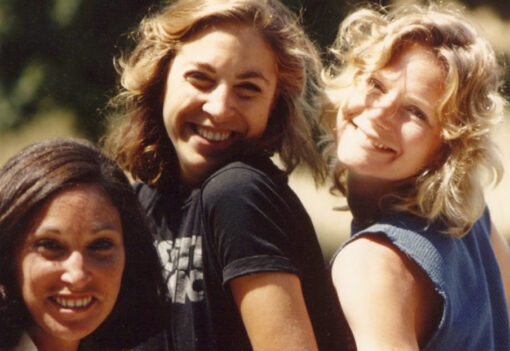 So, there I was on Thanksgiving morning, waiting at 90th Street for the M1 bus, clutching my bag of greens in one hand and my purse in the other. (It was a small gold SportSac, never to be seen again after that morning.)

This was when I lived in a wonderful rental on 93rd between Fifth and Madison, just a half block from Central Park. (A place you can read about in “Horowitz Plays the Bedroom.”) I was the only one at the bus stop, craning my neck uptown hoping to spot my bus — with my back turned toward the afore-mentioned Park — when, all of a sudden, I felt my arms pinned to my sides.

A man — and his smallish son — grabbed my SportSac and ran off into the Park with it. And what did I do? I chased them.

This was back when I was a pretty darned incredible runner. (I had just run that Fall’s New York Marathon in under four hours.) I don’t know what those crazy crooks were expecting, but I bet it wasn’t that their thirty-something dressed-up mark would jettison her bag of greens and hightail it after them. 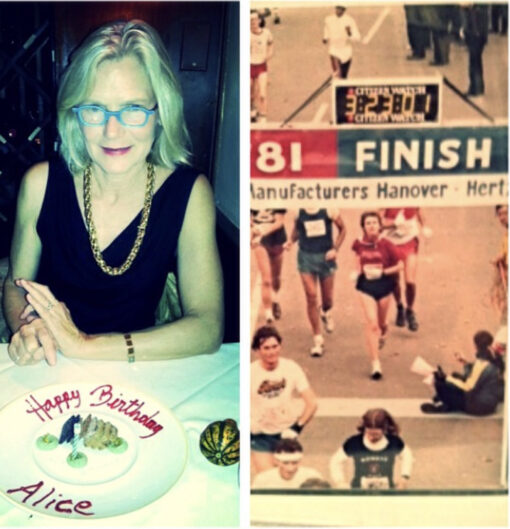 And I almost caught them, too. But every time I’d close in on the one with my SportSac, he would toss it, football-pass-style, to the other one. So on it went, Dad to Son, Son to Dad, until I finally gave up and ran, panting, into the big fancy lobby of a big fancy apartment building on Fifth Avenue and reported my crime. 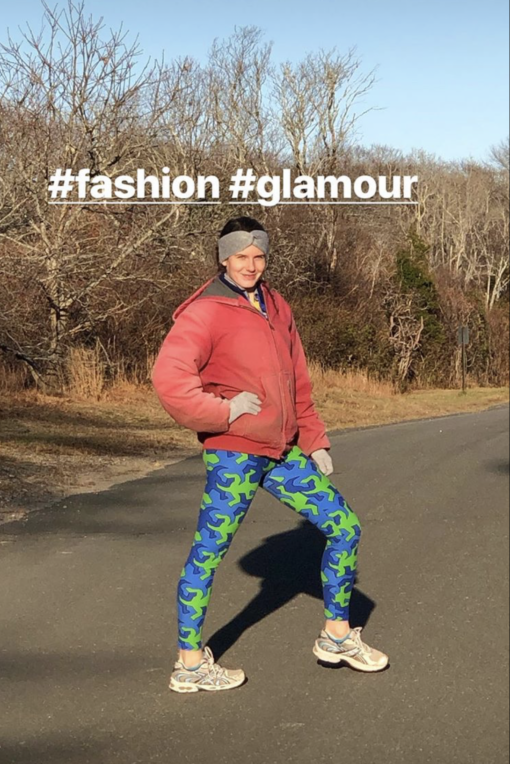 Seen on a T’giving Hike: Maybe if I’d dressed like this the muggers would have left me alone

The police were called (“Oh? Those two! The father-and-son team!”) a report was made, and a good part of the dinner was spent getting helpful advice from Sande’s family and guests. Sande’s brother even helped me find a locksmith open on T’giving Day.

Luckily, there wasn’t a lot of cash in that SportSac. (I didn’t have a lot of cash in those days.) I never saw the SportSac again, but I received a big ole postage-due manilla envelope with all its contents inside about a week later. Apparently, muggers would often take what they wanted from a snatched bag and deposit the rest in a nearby mailbox. The post office would then mail this stuff to you, having deduced your address from, say, your driver’s license, which was part of the discarded stuff. (I guess there wasn’t such a thing as Identity Theft back then.) Sadly for today’s muggers, you can’t deposit snatched-bag-contents in mailboxes nowadays since they don’t open up on top anymore.

Anyway. It could have been a whole lot worse. And I learned a couple of valuable lessons: never stand with your back to the Park — and beware of father-and-son mugging teams who, apparently, don’t get asked to Thanksgiving Dinner. 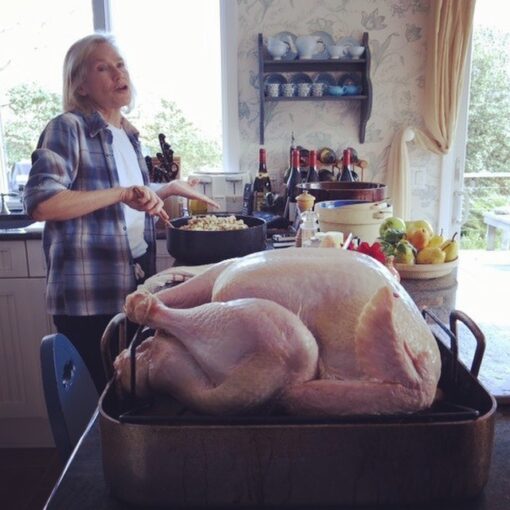 Another Thanksgiving spent basting turkeys — which sure beats chasing muggers