‘Don’t worry. This isn’t going to get (too) political.’

I swore up and down that I wouldn’t veer into political territory. Not in LutheranLiarLand. But there is a funny story that came to mind when I was messing around wasting precious time on Facebook and came across yet another post about Gary Johnson.

In case you’ve been in a cave these last few months (is it only months? feels like years), Gary Johnson is the Libertarian candidate for President of these United States. 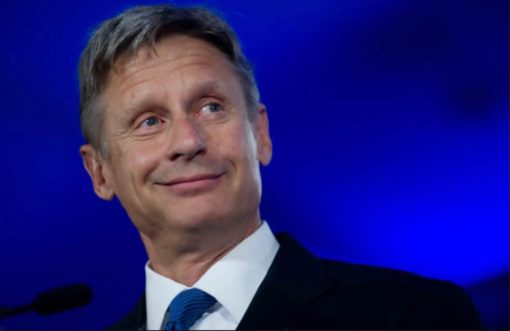 Here’s Gary. Thinking about his favorite European leaders, no doubt

Now Honest Injun I am not going to get into the fact that I think that voting for Gary — or for Jill, for that matter — is kind of like voting for Santa or the Easter Bunny. (Nope, not going there!)

The reason I’m writing (sort of) about Gary is because The Dude is a Libertarian. (There. I’ve said it.) Of course, everyone in our Real Life knows this because, trust me, His Dudeness is not shy about expressing his views to all and sundry. Many a dinner table conversation over the years — and not just in this or any other election year — has turned into a shouting match. Especially when his feisty liberal Aunt Eleanor is present. (She shouts louder than anyone. And she’s 91.)

The Dude has been a Libertarian — and darned proud of it — for as long as I’ve known him. He’s met Gary the J and other Libertarian Leaders on more than one occasion. He’s been to Albany to do a little Libertarian Lobbying. He’s even given speeches on Libertarian Themes.

I went to a couple of these speeches. You know, to show Wifely Support. My favorite was given in the basement of a Hungarian restaurant in the East Village. Singularly bad food — and worse wine — was served to a decidedly motley crew of listeners. One audience member, whose shoes, I noticed, were fastened with duct tape, arrived pushing one of those upright shopping carts. He was very good at shouting.

The Dude was such a good ambassador of Libertarianism that The Child became a convert. Of course she adored her father (still does) so that may have had something to do with it. But, be that as it may, she claimed to be a Libertarian too. Just like Daddy. Her email address was even, for a time, ‘Libertarian Blonde’.

The Child, around about the time she used the Libertarian Blonde email address. She will kill me when she sees this

So. Scroll back to the presidential race of ’04. The Libertarian candidate for president that year was a guy named Michael Badnarik.  The Other Guys running that year were named George W. Bush and John Kerry. You may have heard of them. Extra points if you’ve heard of Badnarik.

The Child was in Middle School (note rare blackmail-quality photo above). Which was the peak of her Libertarian Phase. Which lasted about as long as her Blonde Phase.

Anyway. The Dude had been to some Libertarian Hoedown (where he actually met Badnarik) and brought home an official Michael Badnarik Libertarian for President bumper sticker. 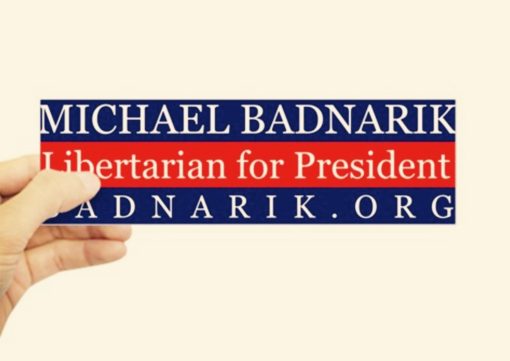 Nope. I didn’t make it up. Badnarik had bumper stickers. And a website too, I see

Now, we live in New York City, which means we don’t do a whole heck of a lot of driving around. But we do have a car. And it does have bumpers. I vetoed the sticker-on-the-car-bumper idea (too hard to remove, I said). Then Dude Man wanted to prop it up in our apartment window, the window facing the street. Nope, we can’t do that, I said. Against coop rules (whew). So he gave the sticker to The Child, who proudly stuck it onto her school locker. (I’m sure her Upper East Side All-Girls School really loved that.)

That Fall, we were due for one of those meet-with-the-teacher-to-discuss-your-child’s-progress command performances. We’re loitering around the hallway outside the teacher’s office when I remark, “Oh look. There’s The Child’s locker.” (Only I used her actual name instead of The Child.) Dude goes, “How do you know that’s The Child’s locker? I don’t see her name on it anywhere.”

I point at the Badnarik sticker stuck to the front of said locker. And The Dude says, “That doesn’t mean it’s her locker. Lots of the kids here could be Badnarik supporters.”

Well. I sure hope you survive the next few weeks of the Donald/Hillary and Sometimes Gary and Jill Show. See you soon with another (completely politics-free, I promise) anecdote. 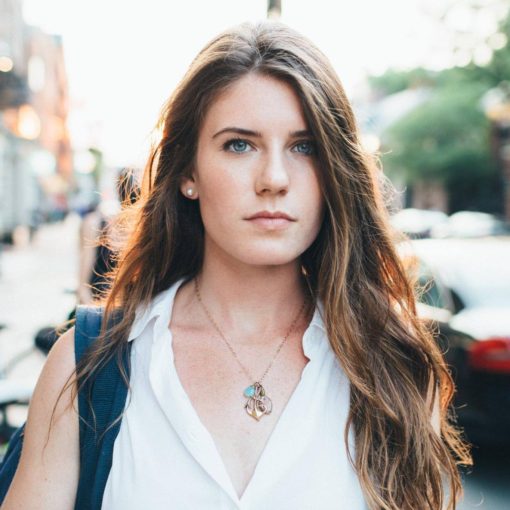 I think The Dude may have noticed she’s no longer Blonde. The no-longer-Libertarian part may come as a surprise