‘Who knew a pancake could be so Proustian?’

I was thinking a lot about pancakes this past weekend. For one thing, it was Father’s Day — a day, like Mother’s Day, when the ole pancake griddle (or frying pan, which is what was used when I was Growing Up Lutheran) can get a real workout.

I can remember a time, not that long ago, when, as a young(ish) mom myself, I would rustle up a batch of pancakes not just for Father’s-or-Mother’s Day, but almost every Sunday morning, winter and summer — pretty much all year ’round. 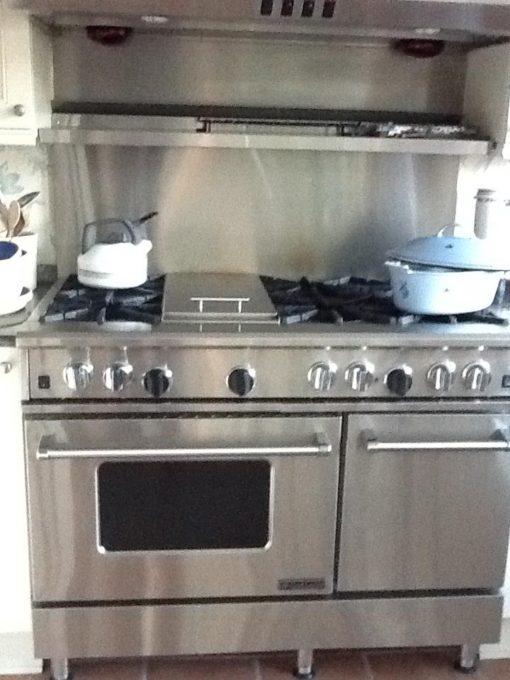 My Garland, all shiny and ready for pancake-making. This is the same stove that Julia Child owned, I’ll have you know; it’s in the Smithsonian. (Not this exact one, of course)

I’d man (woman?) the griddle on my impressive Garland six-burner-and-griddle-topped stove, spatula and coffee cup in hand(s) while The Child polished off an impressive number of pancakes (five? seven? ten?) without benefit of butter, syrup, or even fork. The experience was rather like watching my Oldest Younger Brother Scott polish off sweet corn. (His talent for this inspired my Swedish Grampa to give him the nickname Scott ‘Sweetcorn’ Henry.)

Sweetcorn, by the way, deserves its own story, which you can read about here. But back to pancakes. The demand for them chez Whitmore was so great that my Garland griddle bore two sort of pancake-shaped outlines on its surface. 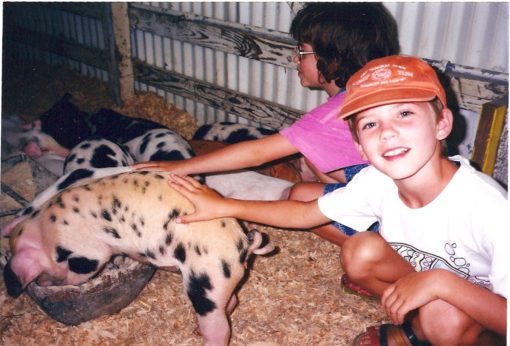 The Child (seen here with Cousin) at her Pancake-Polishing Peak. With pig. (Alliteration, you know)

Speaking of pigs and pancakes, there is a great breakfast place in Seaside, Oregon, called ‘Pig and Pancake’. Just about sums up your basic breakfast pleasures now, doesn’t it? My Mom and Dad decamped to Seaside from the Midwest back in the Aughts. On the rare and wonderful occasions when we Grown Kids would meet there for family gatherings, we’d send the hapless Dads to P & P with all the youngsters so we moms could hang out, not making pancakes, drinking coffee in peace. 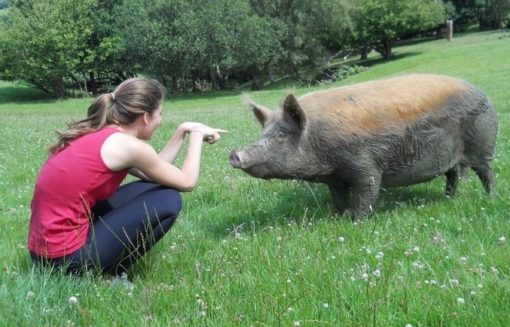 In later years, The Child still had an affinity for Pigs if not (to such a great extent, anyway) for pancakes

But back to the Proustian Thing. Since The Child has grown, we (sigh) have relatively few occasions to crank up the griddle. For pancakes, anyway. (Those pancake-shaped griddle markings have morphed into grilled-cheese-sandwich shapes.) This makes me rather nostalgic. Just the sight of an article like last weekend’s in the Times about how to make pancakes sends me into a tasting-the-madeleine-reverie. 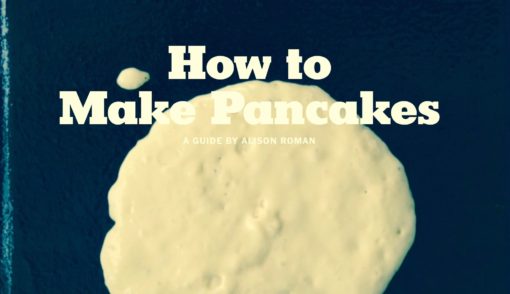 I am hoping, though, that the Times dedicating a whole food section to pancake-making doesn’t trendify them. You know, like when there was a croissant shop (remember Au Croissant Chaud?) on every NYC corner in the Nineties. Donuts, too. Remember the Krispy Kreme Kraze? And a couple of years ago I wrote about a croissant/donut war in Williamsburg (Hipster Williamsburg, not Colonial Williamsburg).

I mean, what if the Williamsburg Hipsters get involved in a pancake war? I can hear the discussions now. Debates about ‘heirloom’ pancake flour, ‘locally-sourced’ baking powder, not to mention ‘farm to table’ butter and eggs. In the quest for best — and most unique — pancake, heck, they might even invent some cronut-like abomination like, god forbid, a ‘pwaffle’.

But, again, back to pancakes. I can’t end this post without passing along a few pancake-making tips. (After all, I spent many a Child-formative year whipping them up, and without benefit of a Times Guide.)

First thing. Don’t underestimate the power of BisQuik. (I can’t help but notice that, not once does the New York Times mention BisQuik. Well. La-di-da, la-di-da.) My personal pancake formula is to use BisQuik, but, since our family likes a little texture, to substitute cornmeal for half. Being of Swedish heritage, I also like my pancakes a tad on the thin-not-fluffy side, so I also use more milk than called for. But that’s a quirk, not necessarily a recommendation.

As for the actual cooking, I read somewhere that singing ‘Happy Birthday’, then flipping, makes for perfect timing. Although I could be mixed up and be thinking about how long people in the Coast Guard get for an onboard-ship shower. Whatever. As Scott (our generation’s Pancake Expert) would say, just watch for the bubbles on the ‘raw’ side to burst, then flip.

One last thing. Avoid mixing things into your pancakes. Blueberries might be okay. But once my mom, probably inspired by one of her ‘women’s magazines’ (Redbook? Ladies Home Journal? Woman’s Day?) put slices of hot dog in the pancakes. This idea was about as popular as you might imagine.

But not nearly as dreadful as something I heard from my First Husband. (Yes, there was a pre-Dude dude; you can read about him in ‘My Polio Shot Marriage’.) Apparently — and I honestly don’t know if this is true — one of The Guy Before Dude’s college buds was working at an IHOP (International House of Pancakes, as it was known then) and actually peed in the batter once. (At least I hope it was only once.)

Hmmm. Maybe I’ll stick to waffles from now on.