I was married so briefly to The Guy, and had been married for such a long time to The Dude, that I sort of forgot all about my ‘previous marriage’. Until one August about 15 years ago when The Child was getting ready for her annual visit to her grandparents in Carlyle, my home town.

See, my mom called with ‘Should I put the wedding pictures away?’ And I’m like ‘What wedding pictures?’ (The Dude and I didn’t really have a wedding; hence no wedding pictures, unless you count the one by the hot dog stand, which you can see if you click here). ‘The ones from your wedding to The Guy’ (only she used his real name). She went on to remind me that The Child was going to be visiting soon, and might see said pictures and have Some Questions.  ‘Oh, that’s okay’, I say. ‘Keep ’em out. It’s high time I told her about being married before.’

I’m going to tell you how I told The Child about The Guy. But first let me describe this previous relationship a bit. See, I met The Guy when I was a junior at the University of Missouri. I was dating another person at the time, the infamous Larry of ‘Larry and the Nose Holes’, who was a hippie. In contrast, The Guy was the president of his fraternity, which was Sigma Alpha Epsilon, whose members (at least in those days) liked to dress in Confederate Army uniforms on formal occasions. Definitely not a hippie.

It was rather fun to date them both at the same time. When I went out with Larry, I wore torn jeans and uncombed hair and said ‘right on!’ and went to rock concerts with, like, Three Dog Night where I got sick on Boone’s Farm Apple Wine. When I went out with The Guy, I wore a dress and nylons (yes, ‘nylons’) and said ‘go, Mizzou!’ and went to football games where I got sick on Mad Dog 20/20.

Eventually, I had to choose. (Or I thought I did anyway. Which is sort of the same thing.) I chose The Guy. Not because he looked swell in a Confederate Uniform, but because he was graduating from law school. Although the fact that he was handsome didn’t hurt. He rather resembled a heartthrob of the time, Burt Reynolds, but before he (Burt) started wearing a rather unfortunate rug. (I honestly don’t know if The Guy wears a rather unfortunate rug; I haven’t seen him in about 40 years.)

Before I know it, we’re engaged. See, in those days if you wanted to buy a couch or shop for double-bed sheets or cook stuffed pork chops for two or (yes, I’ll go there) engage in you-know-what with someone, you got married. No one in my world or even anyone I’d heard of (gasp) lived together. Which is what The Guy and I would probably do today, instead of getting married. (Oops. I just thought of telling my Gramma Peterson about living together. So, never mind. We would get married.)

So get married we did. In a nice Lutheran (big surprise) ceremony. With a reception held in my parents’ backyard. It was about a zillion degrees, and I picked that dress with long sleeves, a high neck, and dozens of layers of skirt. In retrospect, my mom should have known: Anyone who picked out that dress for an August wedding in Southern Illinois had absolutely no business getting married.

I will save the story of our short marriage for another time. But you know how it ended: it ended. After a couple of years, The Guy and I decided to go our separate ways. He was a lawyer by then, so the divorce (excuse me, the ‘dissolution’) was easy. He drew up the papers, got a friend to file them, and we paid 50 bucks and shook hands — never to cross paths, or to shop at K-Mart together, ever again.

I refer to this episode sometimes as my ‘polio-shot marriage’, because, since I’d been married I got to stop making getting married be my goal in life (which I know sounds crazy to you Millennials, but was the goal for many young women of my era). Getting married early and getting it over with was, for me, like being inoculated against worrying about getting married. I could get on with having a nice life. Kind of like that scene in ‘Annie Hall’ where Woody Allen’s character gives Diane Keaton’s a kiss at the beginning of their first date so they can get on with having a nice evening instead of worrying about whether they’ll kiss or not.

But, like I say, several pieces of early marital photographic evidence existed in my parents’ house, so it was time to come clean to The Child, who was about eight or nine at this time: 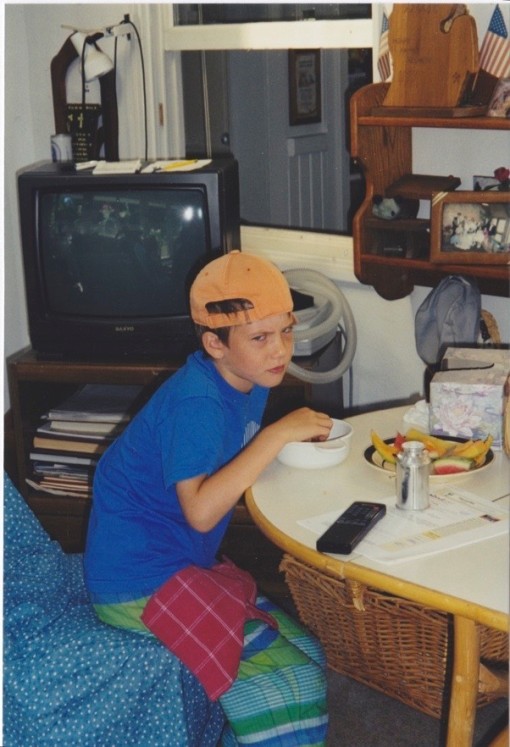 The Child, enjoying summer vacation at Gramma’s house at about the time of this story. Note family pix on shelf, one or more of which could be of The Wedding in Question.

Here’s kind of how it went:

Me: ‘Gramma reminded me of something that I sort of forgot to tell you about.’

Me: ‘See, a long long time ago, way before I met your Dad, I was married to this other guy.’

The Child: (even more silent, if that were possible)

Me: ‘It was really a long time ago, when I was probably too young to get married. I met him in college. Anyway, we were only married a very short time, and then we got divorced. And then I moved to New York and met your father.’

The Child: (looking as though I had just sprouted wings or, possibly, horns) ‘Does Dad know about this?’

Well. As you can imagine, it took a while before she could digest this large lump of motherly history. But after a bit, she was asking me questions about The Guy (‘Where is he now?’ ‘I honestly have no idea’), and looking a bit more like she was willing to continue to accept me as her mother.

But I couldn’t resist. I just had to go on:

Me: ‘Oh! One more thing I forgot to tell you. I have these other kids…’

49 thoughts on “My polio-shot marriage”