Okay, I said I wasn’t going to publish a new post till Monday. But I just saw the Jeff Koons Retrospective at the Whitney Museum (details here). And, well, I just can’t help myself. I simply must ‘share’. For one thing, you just might want to go see it. Not only is it ending soon, it’s also the last show that’ll be held in the ‘old’ Whitney — before it pulls up stakes and decamps downtown, where it seems everything cool in New York is heading (oops, excuse me, Brooklyn).

Here, to tantalize you, are some of the pieces you’ll see if you go: 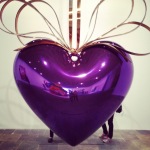 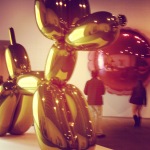 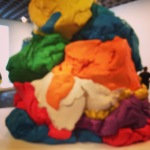 There’s tons more. Like that ceramic sculpture of Michael Jackson with his monkey. And some racy stuff featuring Jeff himself with his then-wife, the porn-star-member-of-the-Italian-parliament Cicciolina. Thank goodness this is a family blog.

You notice that I am not even attempting to play Art Critic here. I’m pretty much in the camp of Art being whatever you think it is. The Dude, for example, thinks something is Art if the piece A) looks like whatever it’s supposed to be, and B) was hard to make. Hmmm. Come to think of it, I bet he’d like the Koons Show.

The bright colors and poppy-powwy flash that Jeff hath wrought at the Whitney did remind me of an unintentionally hilarious show I saw (and documented) at the Museum of Modern Art a couple of years ago. This one featured, among other pieces — like whale bones suspended from a ceiling, and yogurt lids stapled to a wall — an empty shoebox. Yes, an empty white shoebox, just sitting there on the floor. A big guy was guarding it. You weren’t (hah!) supposed to take pictures of it. I cheated, of course. As you’ll see when you watch this little movie, called, fittingly enough, ‘MoMA’s New Clothes’:

For you Koonsians out there, a lovely person by the name of Theo just contacted me with a suggestion to include Artsy’s Jeff Koons page. So Theo, here it is. I think everyone out there will enjoy it: Artsy’s new Jeff Koons page

And, on Monday, you’ll get to read about a cat of a different color. In my post ‘The Cat is the Hat’. Now get out there and enjoy your weekend.