Karl Malden — and his nose — will just have to wait. I was all ready to hit the ‘publish’ button when I realized that today is Mom’s birthday. So I’m putting Karl’s story into the blog equivalent of Tupperware, and writing a post about Mom instead.

Now I realize that you readers have perfectly good moms of your own. You might very well be asking ‘why the heck would I want to read about Lutheranliar’s mother?’

Well, she’s hilarious, for one thing. Once, while driving us all somewhere, she told my fidgety brother Roger to ‘get in the back seat if you want to wiggle your behind.’ Another time, she and Dad had to go out of town unexpectedly and she had to leave us on our own for a couple of days. (There were five of us; I was the oldest. Big surprise.) She puts a few bucks on the kitchen counter and says ‘Here’s some money. In case you run out of bread.’ My brothers hooted and called her a ‘beatnik’ (which was kind of like a ‘hipster’, in case you’re wondering).

Also, hilarious things would happen to her. When we lived in Memphis (see ‘That’s my Bob’ for colorful family detail), she kept getting weird phone calls. Guys asking her for ‘dates’ and wanting to book her to pop out of cakes naked at Rotary Club meetings. Seems that there was a ‘party girl’ (that’s what they called girls-for-racy-hire back in those days) with the same name as ours listed in the Memphis phone book. Gee, Mom. You sure were good-looking enough. Maybe you wouldn’t have had to take in those boarders. (Again, see ‘That’s my Bob’) 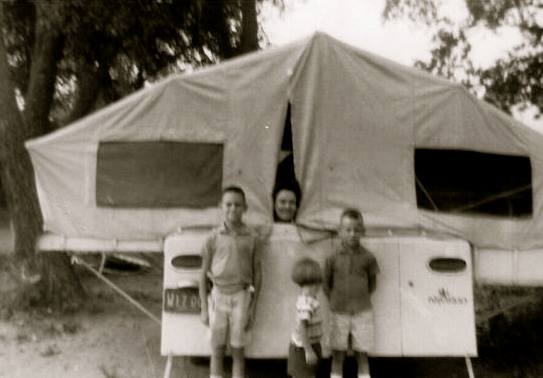 Mom peeking out from Nimrod. With Scott, Laura and Roger

Oh, she’s adventurous too. While she has graduated from the family Nimrod pop-up camper, she is still quite the traveler. She prefers Alaska Airlines, by the way. They serve the best wine. Here’s a photo collage of trips she’s taken in the past year alone. (Each trip had something to do with one of her five kids, natch.) 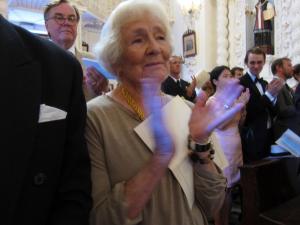 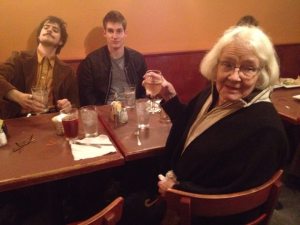 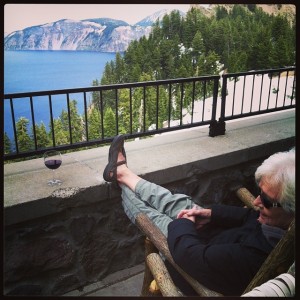 Mom gazes at Crater Lake on a trip with Laura 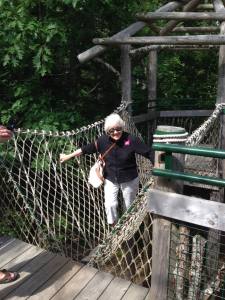 Mom on a bridge in Maine near Doug’s 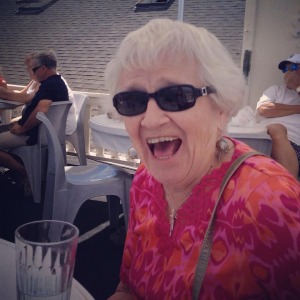 So, here’s a toast to my Mom on her Day. Treat yourself to the good stuff, Mom — not the pinot grigio that comes in the box.

And if you know my Mom, or just wish you did, give her a shout-out. She’s on Facebook (of course). Here’s her profile picture, taken halfway through a 10K race. Why in heaven’s name was a woman in her 80’s doing a 10K? She wanted the tee shirt. 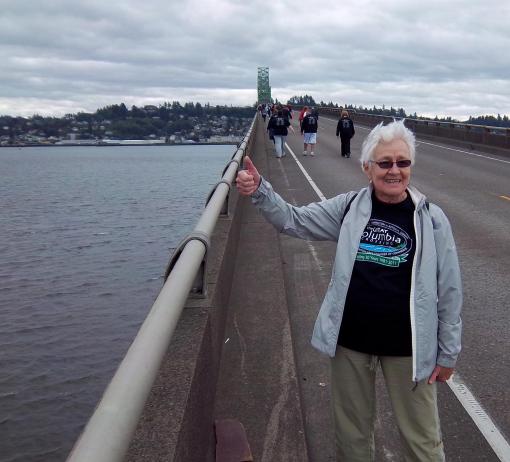