A couple of weeks and a lifetime ago, we were birding our way along a highway (and I do mean “high”) up in the mountains of Borneo when a ramshackle car sputtered to a halt on a steep stretch of roadway right alongside us. 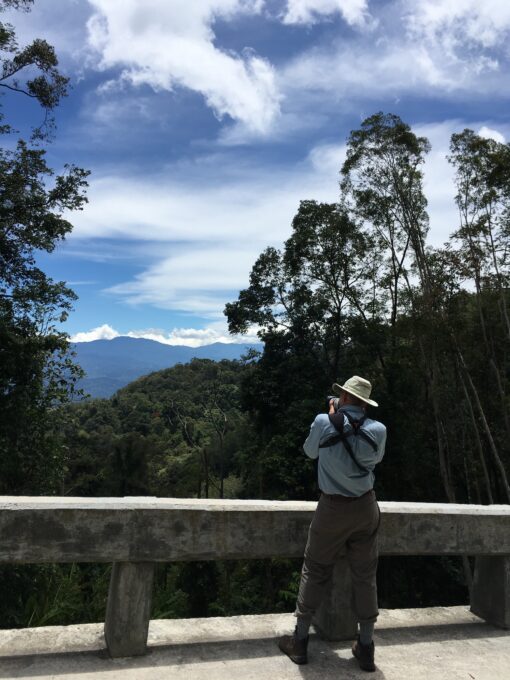 Another roadside attraction. Nope, The Dude isn’t looking at that gorgeous mountain. There’s a bird over yonder somewhere

Our guide sauntered over to see what was what and reported back that the driver was on his way to the City (in this case, Kota Kinabalu) with a load of fruit to sell. He and his load couldn’t make it up the incline, so he pulled over for a smoke. 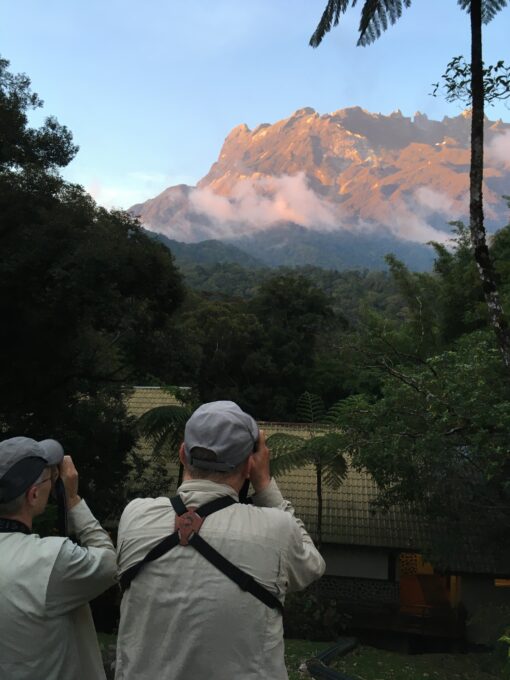 That’s Mt. Kinabalu, at sunset of the day we survived the durian episode

Now, we’re in Borneo, remember, so by “load of fruit” I don’t mean a whole batch of apples or pears. Not even pineapples or bananas. Nope, these “fruits” were completely unrecognizable. Our guide Hamit (a name I committed to memory by using the mnemonic “hah! meat!”, because what passed for meat in Borneo was pretty darned amusing) — well, Hamit thought it was pretty darned amusing to offer us tastes of some of these fruits and then watch our faces. 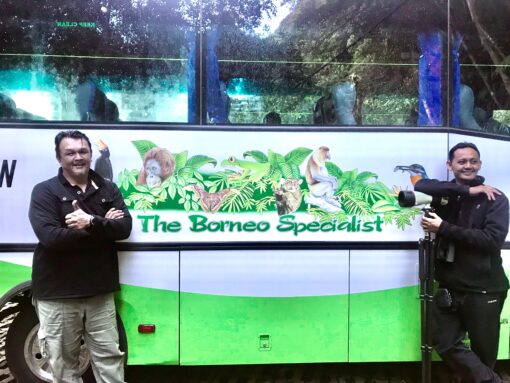 That’s Hamit on the right. I not only forgot the guy on the left’s name, but also his mnemonic. He was our driver, and he didn’t make us eat any fruit

Most of these strange fruits were pretty tasty, if weird-looking (at least to the innocent gringo eye). Like the litchi, which rather resembles a cross between a plum and a sea urchin — and tastes rather like neither.

But then Hamit moved to the rear of the vehicle and had Fruit Man open the trunk. 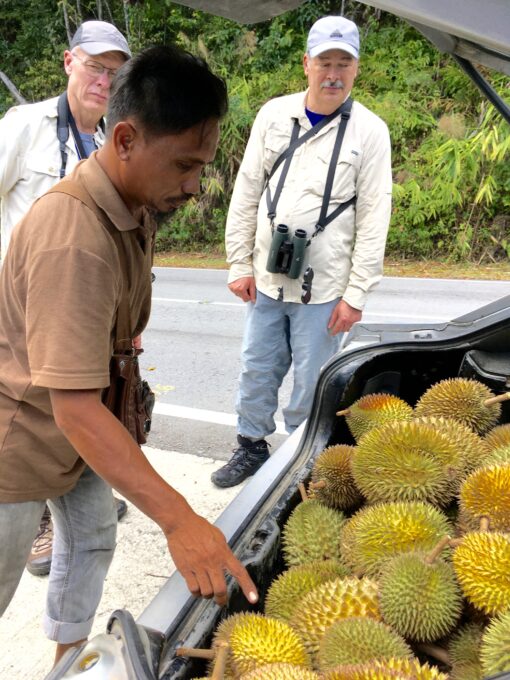 There’s a reason this fruit is in the trunk. And isn’t because there’s a lot of it

We should have realized there was something fishy going on with that trunk. For one thing, it smelled fishy. Well, maybe not “fishy”, exactly. More like a septic tank full of fish. Fish that had been laced liberally with garlic. And then left out in the sun for a really really long time.

“What the heck is that?” our little Birder Band collectively gasped. “It’s durian, a Malay delicacy,” Hamit smirked. “Wanna try some?”

Well, before I tell you what happened, here’s what Wikipedia has to say about the durian:

Its odor is best described as pig-shit, turpentine and onions, garnished with a gym sock. It can be smelled from yards away

Yup. That’s about right. But, believe it or not, there were those of us — myself included — who decided to give the durian a go. “Hey, we’re over here for an adventure,” we agreed. “We may never get to Borneo — or get a chance to taste a durian — again!” 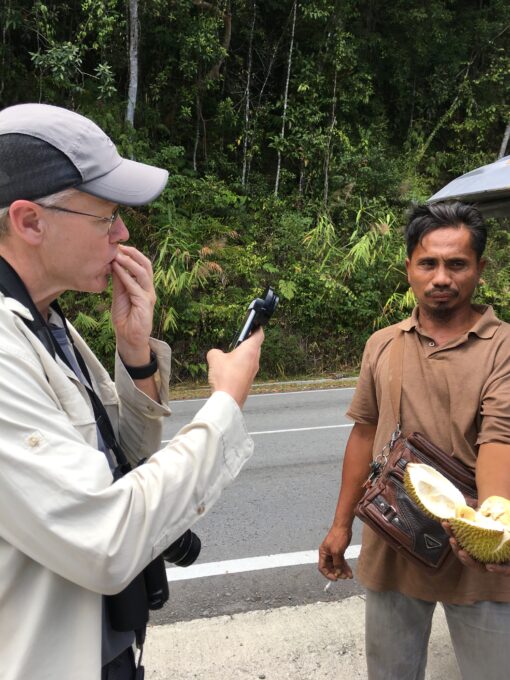 One of our Band tries a taste while taking a selfie. He claimed to like it. (Note cigarette-smoking Fruit Guy. He claimed to “eat a durian every day”; he also had very few teeth)

Yes, as I mentioned, I too tried a taste. I did not document my durian sampling, since my iPhone-filming hand was busy holding my nose. Suffice it to say that I was not a fan. Even while blocking my nasal passages to avoid the smell I thought it tasted (at best) like creme brulee with a burnt garlic glaze.

Not everyone, of course, agrees. Or no one would be buying Fruit Man’s durian stash. Wikipedia also says:

Apparently, there are many Durian Fans in Southeast Asia who agree with Mr. Wallace. There are Durian Festivals and Durian Fairs and the fruit is used to flavor ice cream and candies and puddings — there is so much Durian Appreciation that social controls have had to be enacted:

The persistence of its odour, which may linger for several days, has led to the fruit’s banishment from certain hotels and public transportation in southeast Asia 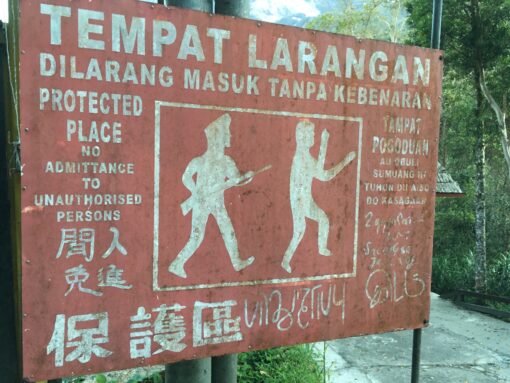 Nope, that’s not a sign warning against durian consumption. Tho it very well could be

So. Maybe if there is a mask shortage and a dearth of Purell, we should just import a bunch of durian and have every man, woman, and school-avoiding child here in the States — particularly in crowded urban areas — crack one open. Trust me, we couldn’t get six feet apart fast enough.