‘Well, how about a cave full of bats?’

If you are the least bit squeamish, you may wish to skip this week’s much-belated post. Belated, because I’ve been bird-hunting in Borneo. 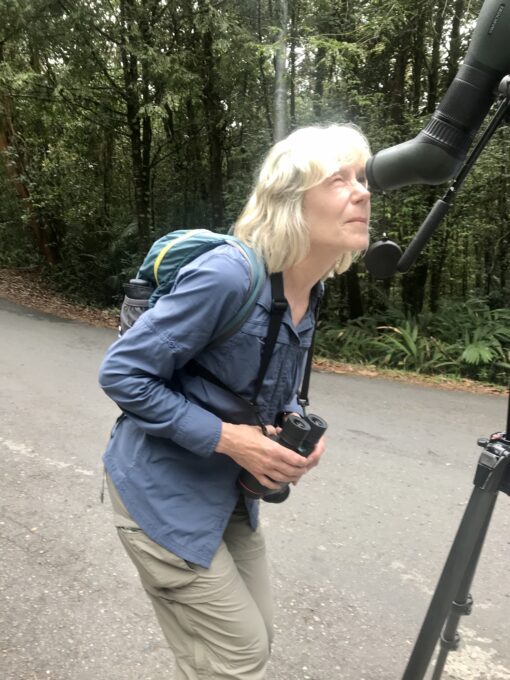 Through a glass, but not darkly, I spot my target: perhaps a hairy drongo?

Borneo boasts lots of lovely avian species, but has less than adequate WiFi. Not that I’m complaining; it’s actually refreshing to be less-than-connected, especially when the news Back Home is of political plotting and pandemic panic. 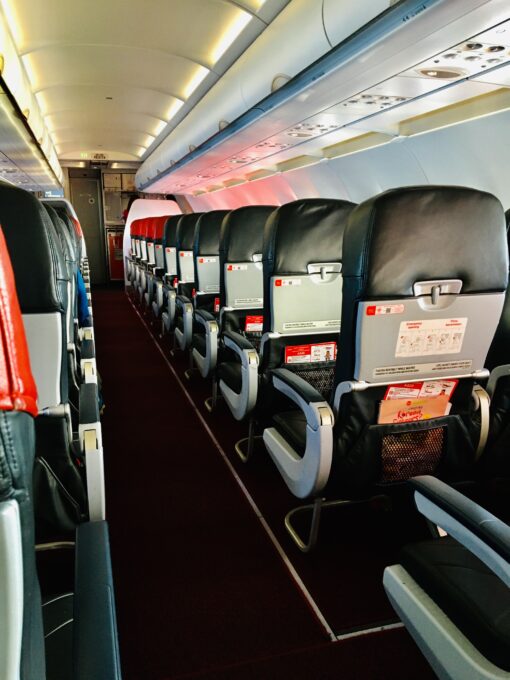 Speaking of panic, here is the interior of the plane we took from Kota Kinabalu to Taipei, where I started writing this piece

I’m in an airport lounge (thank you, AmEx) writing away while awaiting our plane to JFK — which will be 14 1/2 hours in duration, two hours less than our flight to get here.

As I mentioned, the Bornean birds are beauteous. But one must deal with — gasp — leeches. And, although we took the Proper Precautions (see my piece “Leech Sock it to Me!” for ghastly detail), the little buggers weren’t daunted. Leech socks, as I squeamishly explained, are supposed to keep leeches from inch-worming their way up your pant legs. 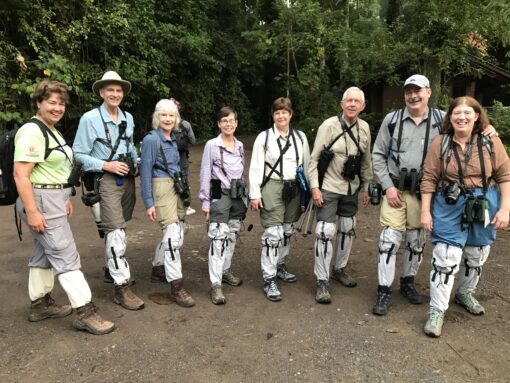 But, even though we leech-socked ourselves to the hilt, er hip, all but two of us got up close and personal with at least one leech. One of our party got three — yes, three — leech bites. It seems those enterprising leeches, attracted by our body heat — which was considerable — were leaping from the bushes and even dropping from the trees. 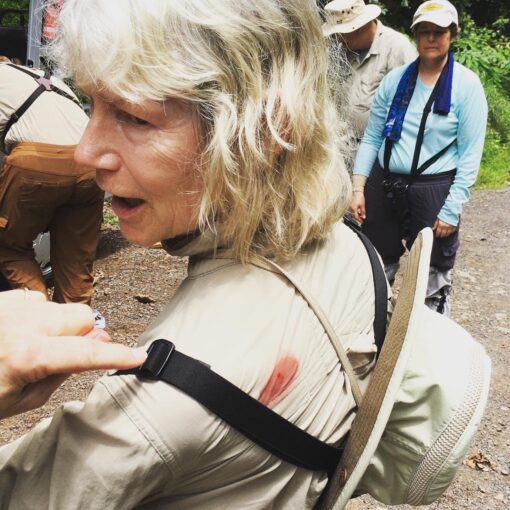 Me, sporting the Red Badge of Leech Courage. The critter had inched its way thru a vent in the back of my shirt, sucked its fill, then dropped off. So I didn’t even get the satisfaction of stomping it

Oh — there was a silver leech lining, so to speak. Each of us who were bitten got a certificate from Resort Management thanking us for “donating blood” to the local ecosystem. (Interesting note: Prince William and Kate spent their honeymoon at this resort. I bet Kate looked smashing in her leech socks.)

My legs were protected, but my shoulder most definitely was not, leading me to suggest an invention: the leech suit. It would resemble a hazmat suit; full coverage, with two little eyeholes for one’s binoculars. (Don’t steal this idea; I’ll sue.)

But I must say that leeches, though they do (quite literally) suck, came in second in nastiness to the bat cave.

Now, I admit that I’ve never been one for caves at any time or in any place — did you read Tom Sawyer? Does the name Injun Joe mean anything to you?

Well. On this trip we visited a cave festooned with swiftlet nests. These are the nests used in birds’-nest soup. I will spare you the gory details about the nests’ actual harvesting, except to say that sleeping inside a pitch-black cave is involved, since the very expensive nests must be guarded 24/7 against thievery. (I just checked, and you can buy a box of birds’-nests for $690.) 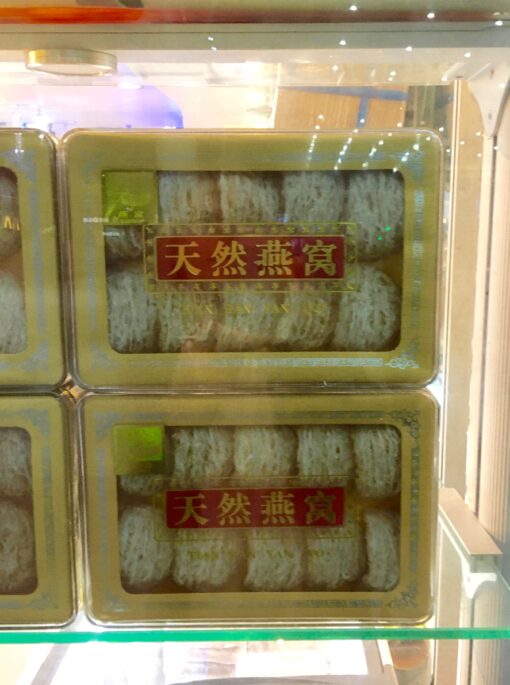 Birds’ nests for sale at Kota Kinabalu airport. Nope, I didn’t buy any

This cave is not only pitch-black inside, but is filled with gazillions of bats, which are constantly producing gazillions of pounds of bat guano. (Which is bats–t, you know.) Seriously, the cave floor is covered with mountains of the stuff. There is a walkway running around the sides so you don’t have to step in it, but the walkway as well as the guano is alive with crabs and cockroaches and rats and snakes. One dare not slip, since one would be required to grab said handrail. (The Wit of our group suggested making Guano Angels with our arms and legs if we were so unlucky as to fall in.) 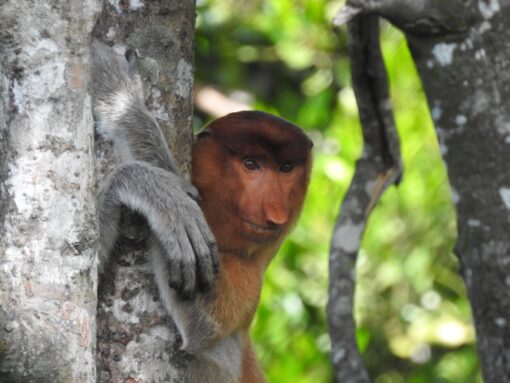 I actually have a photo of the cockroach-covered handrail, but will not inflict it upon you — here’s a much-less-disgusting proboscis monkey instead

To top things off, one must wear a mask (to avoid inhaling bat fungus) and carry an umbrella (to avoid being drenched in bat pee). One of our group worked in a biology lab; right behind me on the walkway she quietly muttered, “This is my worst effing nightmare.” Only she didn’t say “effing.” I hear you Karen.

Yes, we actually paid good money to go inside this cave. Which must mean we’re even battier than the bats. And how was it? As I remarked upon exiting, “That was most definitely a once-in-a-lifetime experience.”

Kind of made me nostalgic for the leeches. 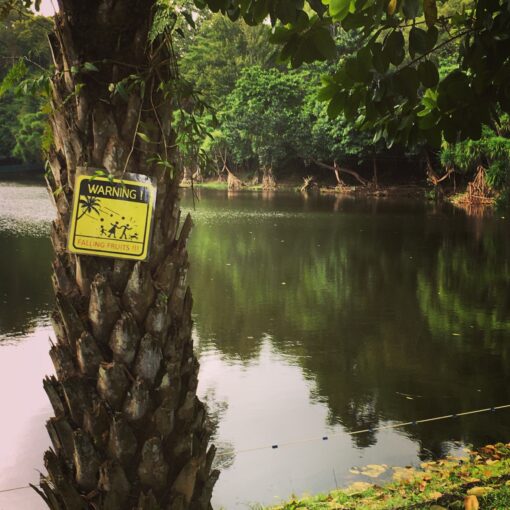 Seems like everything in Borneo is out to get you. If not leeches, then it’s Falling Fruit

12 thoughts on “What could possibly be worse than a rainforest full of leeches?”