‘Just make sure there are dimmers’

Those who prefer a soft and lovely ambient glow are sure to be paired with those who insist on lights so glaringly, wincingly bright you could perform cataract surgery at the dinner table. 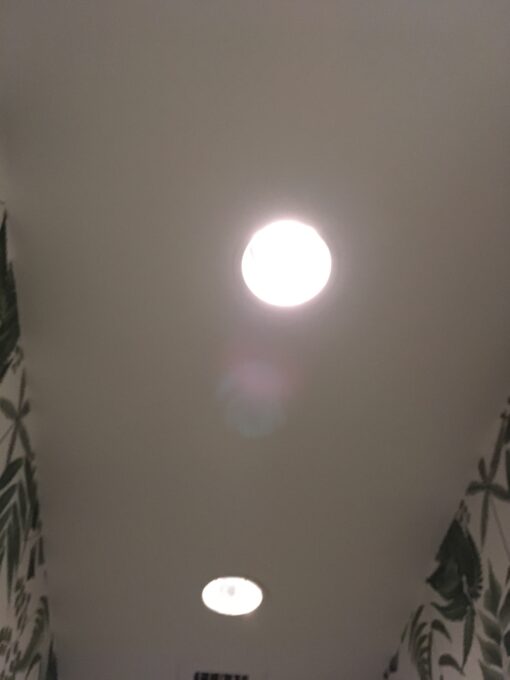 Dude Man’s favorite kind of lighting: ceiling cans, only turned up to eleven

Maybe it’s because he actually was a cataract surgeon that Dr. Dude likes his lighting so, well, megawatt. But I bet there are plenty of you out there who are married to doctors, lawyers or even Indian chiefs with similar taste in luminosity.

It’s just one of many funny things about marriage. And another reason I am so gol-darned happy here in the Ken & Barbie House. Just as I am grateful for the pocket doors sealing off its teensy-but-separate bedrooms (See “Why Dude Man’s Not Dead”), I am happy about my ability to dim as low as I want to go. 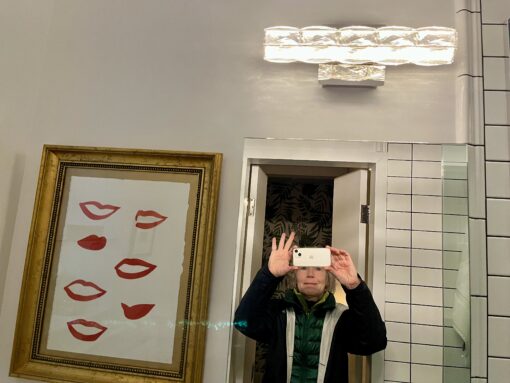 I can also have a bathroom light that looks like a giant diamond. Not to mention a framed lipstick-print watercolor. And (in the photo at the top of this post) a disco-ball ceiling light

Speaking of lighting, remember that character on Seinfeld called the Soup Nazi? He was the really crabby food-cart vendor who, if you didn’t place your order just right, wouldn’t give you your soup. (Oh, and speaking of Seinfeld, I saw Larry David on my walk this morning. I almost stopped to ask him what the heck he was doing on the East Side.) 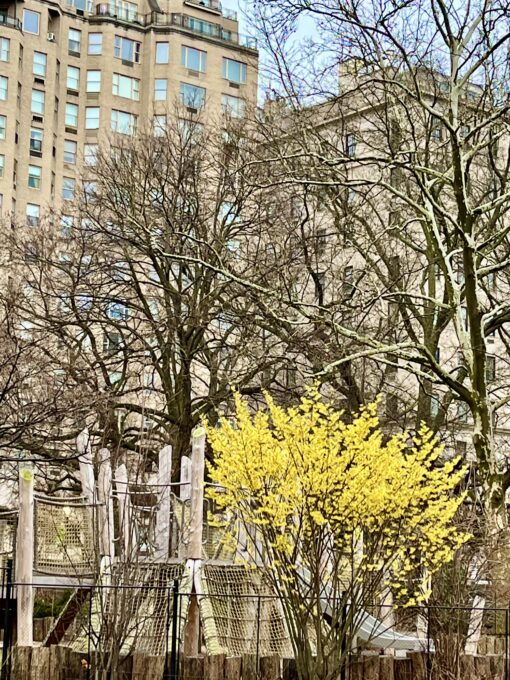 Another thing I saw on my walk this morning. And no, I don’t want a dimmer on that forsythia

Well, there’s another New York Institution that was featured in a Seinfeld episode. It’s called Just Bulbs. (Forgive me for not finding that episode for you. I’m already a day late with this story and time’s a wastin’.)

Anyway. Just Bulbs is to lightbulbs as the late lamented Gracious Home was to basically everything. Gracious Home had bedding, they had pots and pans, they had candles and paint and placemats and gadgets galore. In fact, when she was little, The Child and I played a game called “Stump Gracious Home.” We’d go in and ask for, say, a sink strainer. And the Gracious Home Greeter would lead you to a whole wall display of them.

Well, Just Bulbs is like that, only with bulbs. They have every single kind of bulb you can possibly imagine, even the teensy ones that go inside your car’s glove compartment. (Does anyone really keep gloves in there?)

I don’t know what happens in the Just Bulbs Seinfeld episode, but I can tell you about an actual episode I witnessed there not long ago.

One of my adorable glam-girly lamps needed a new bulb. (The crystal one with the beaded shade.) So I marched on over to Just Bulbs. There was one other customer ahead of me, who was clutching a big ole ginger-jar lamp.

“Do you have any lamp harps?” she asked.

In reply, and with an expression befitting the Soup Nazi, Mr. Manager pointed at the illuminated sign over his head. Which read, of course, “Just Bulbs.”

“Do you get that a lot?” I asked when it was my turn. He responded with a world-weary Larry David-esque sigh. Then went to get me my bulb.

After which I went home, screwed it into my pretty little lamp — then promptly dimmed it. 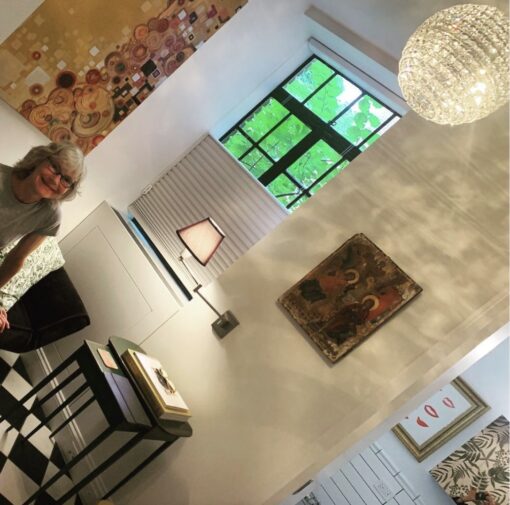 Me. Happy as a female clam with my Glam Girl lighting. Dimmed, of course