‘After all, what’s not to like about a big ole party with champagne and dancing?’

There was a long dry spell there for a while. But I’m happy to report that not only is June bustin’ out all over, but so are the weddings. Not only are we going to a dandy weekend-long affair in a couple of weeks, but we just found out Nephew Chris and Squeeze Sarah are engaged. (I was going to use some corny euphemism like ‘getting hitched’, ‘tying the knot’, or maybe even ‘making things legal’, but restrained myself. Though I could not resist saying ‘Squeeze’. Oh well.) 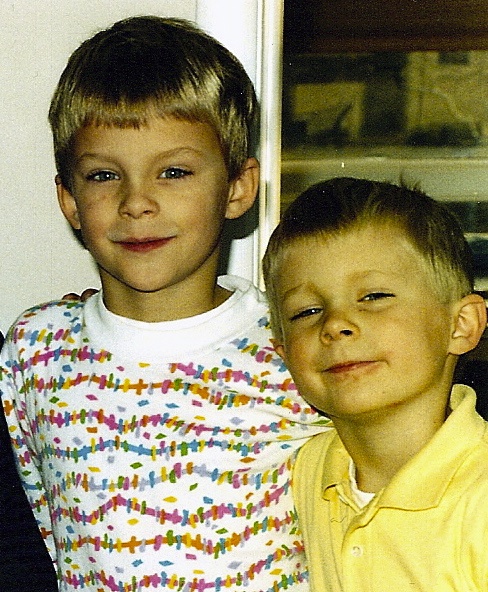 Nephew on the left: engaged to be married. Nephew on the right: just got married. Yes, this is how I picture them in my Auntly Mind’s Eye

The long dry spell was because The Dude and I are long past the stage of going-to-friends’-and-relatives’ weddings and have finally broken into going-to-friends’-and-relatives’-kids’ weddings.  (There was a blip in there with a few do-overs, including my own, but not many, I’m sad/happy to say. My First Wedding is now a fond memory and funny story called ‘My Polio-Shot Marriage.’)

Sometimes for these kids-of-friends weddings, we have to study up in advance, since in many cases, we haven’t even met the bride and/or groom. Does that bother us? Heck no! We just look for the couple in the tux and (most of the time) long white gown who were standing up front or under the chuppa in the church/garden/country-club-or-equally-fabulous-venue, wish them a happy future, then head for the champagne fountain and the dance floor. (Oh, and in case you were wondering — yes, we’re good with gifts.) 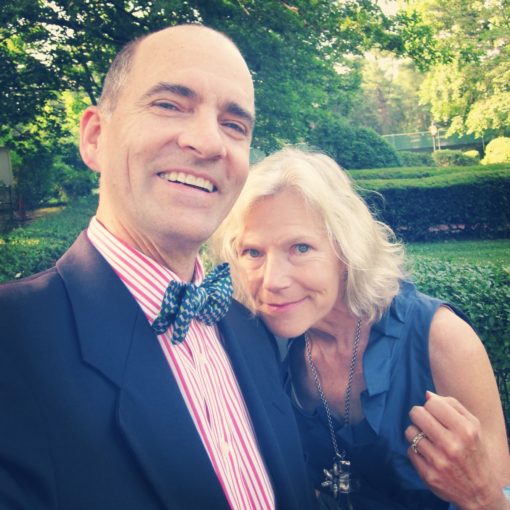 Speaking of fabulous, I suppose the most over-the-top wedding in my personal wedding-going experience was the Wedding in Rome. You can read all about its fantasticalness in ‘La Dolce Vita and Me’. But in case you’re in a rush, this was the one where I shared Business Class with Britney Spears, got escorted into the Vatican by the Swiss Guard, and danced all night on the Spanish Steps before being caught in an Italy-wide power blackout.

Of course you don’t have to have a big wedding — or even a wedding at all — to make a marriage “stick”. The Dude and I, as you Constant Readers out there know, had what could be best termed a Mini Wedding: vows in a chapel at the UN, followed by a hotdog stand photo op across the street, then a Carvel wedding cake (true!) shared with our parents before leaving for our marital Road Trip through Portugal, Spain and Morocco, where we memorably crashed at Malcolm Forbes’ pad in Tangiers. (You can read about our honeymoon hijinks in ‘The Cave of Our Marriage’ and ‘Malcolm and The Duchess’, if so inclined.) 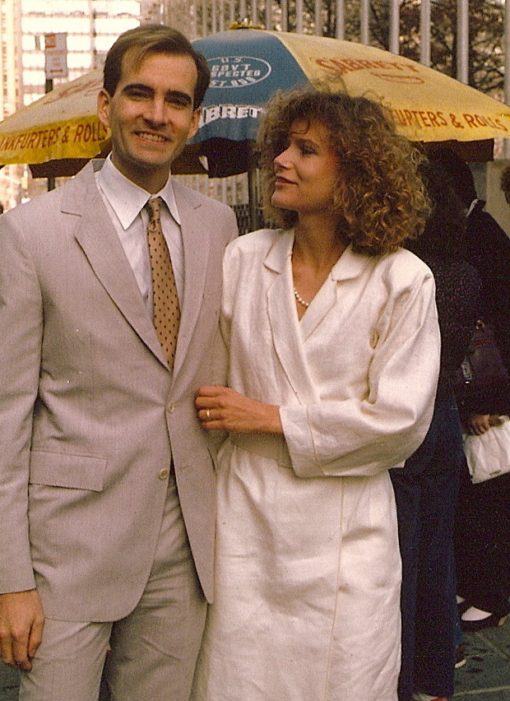 Official Hotdog Stand Portrait for My Wedding that ‘Stuck’

Mainly, though, the weddings I remember most, and most fondly, don’t have much to do with the fancy-factor or even with the venue. They have to do with the people who were there and the memories that were made.

Like, there was Cousin Christine’s wedding. This was a rather simple affair (church service followed by reception in her parents’ garden) which came to be known in family lore as the Wedding Where We Kept Losing Baby Matt. (Yes, this is the same Matt who just got married himself.) Matt, who is The Dude’s Sister’s Second Son, was a babe in arms who kept getting passed around as the Adults in Charge swigged champagne. “Who has Matt?” became a recurring refrain as the evening wore on. Luckily, he was found safe and sound in his crib the next morning. Though, to this very day, no one can be quite sure who put him there. 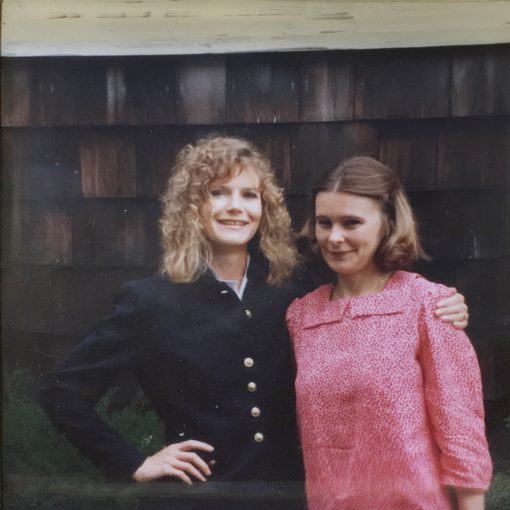 Me and The Dude’s Sister (Mother of Matt) at Cousin Christine’s wedding. Notice how neither one of us is holding Baby Matt

And, of course, there were the Weddings of My Siblings, like Middle Younger Brother Roger’s (see photo at the top of this post) where everyone, even all the littlest cousins, danced under the Chicago stars. And my Only Sister Laura’s, where I served my one-and-only stint as a bridesmaid. (Funny, I was a bride twice, but a bridesmaid only once. Go figure.) This was the wedding where, in the receiving line, I was greeted warmly by a handsome grown-up man who clasped my hand and asked “Do you remember me? You used to be my babysitter!“ 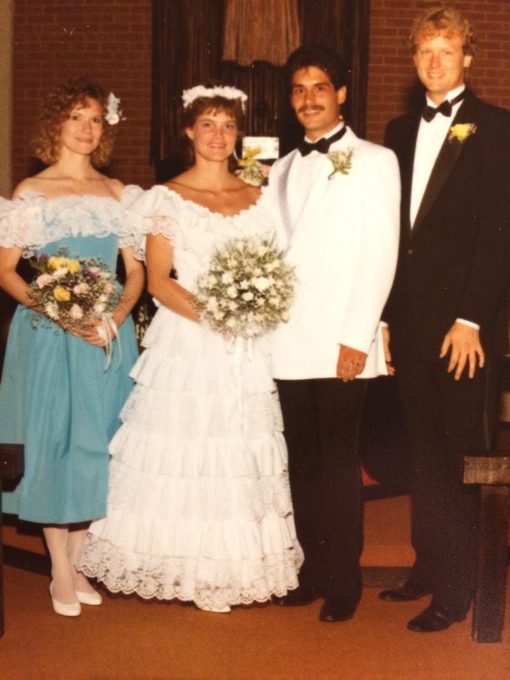 The one time I was a bridesmaid. No, I never wore the dress again

I could go on and on, because I’ve been fortunate to have been invited to many a fine — and memorable — wedding. But time marches on, and so must I. But, in closing, if you find yourself with a hole in your guest list, think of me. I clean up nice, kneel if required, never hog the buffet or the dance floor — and always give good gift. 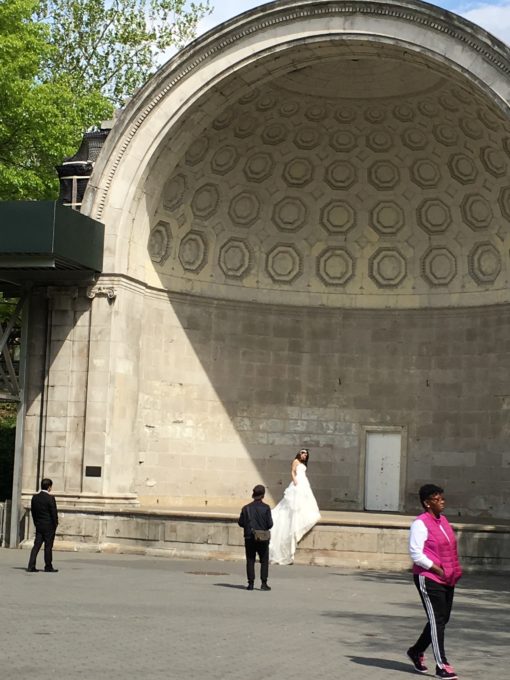 A bride poses at the Central Park Band Shell. I was tempted to congratulate her, just to see if I could tag along to her reception