Who doesn’t love getting invited to parties? Well, maybe The Dude, actually. He’d much rather relax in his jammies in the comfort of his own home than head out to a party after a long work week. But the last two Fridays in a row have found us helping two Birthday Boys celebrate very Big Birthdays at a couple of very Big (and very nice) Parties.

One of the nice things (aside from the free-flowing champagne and hors d’oeuvres) that we appreciated about these two parties in particular was that there was no dress code. At least, not a dress code that was spelled out on the invitation. I guess the hosts (or hostesses, in these cases) figured that guests old enough to go to a birthday party without holding someone’s hand would be able to figure out how to dress.

Now, me, I love parties. And I look forward to getting party invitations of almost any kind. Including the ones with the little notes on the bottom of the invitation that tell you what to wear. 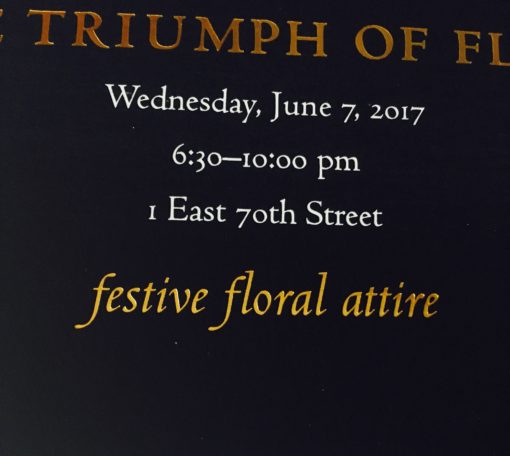 Should I wrap myself in cellophane like a bouquet from the corner deli? 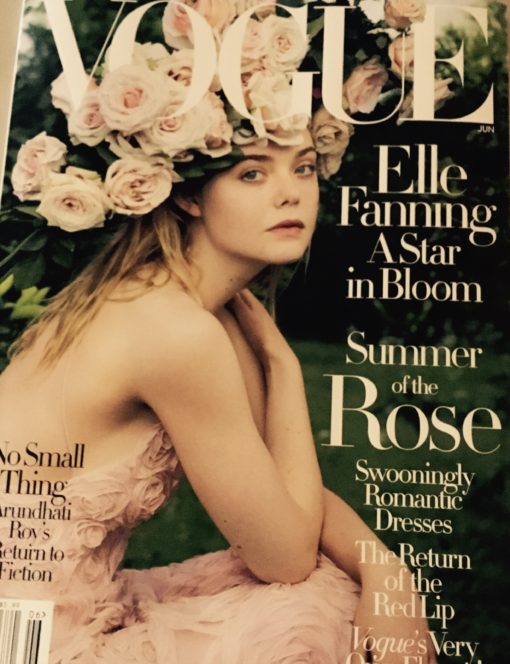 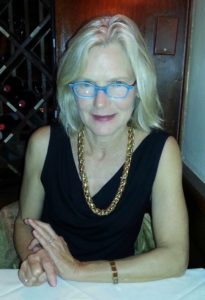 Me, in my One Dressy Black Dress, celebrating a birthday 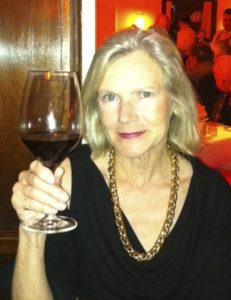 But back to those dress codes. I’m sure you’ve seen your share of these. ‘Jacket and tie’, ‘Formal’, ‘Semi-formal’. (Does this mean half of you is dressed up, and the other half not? You know, like a suit jacket with jeans — a look I rather like, actually.) And then there is ‘Business casual’, which, honestly, I’ve never been able to figure out, except that when I was working in advertising, being ‘casual’ while doing ‘business’ (like on Casual Fridays) inspired the guys to dress like toddlers — in tee shirts, shorts and Teva sandals. At least most of them skipped the socks.

Some girlfriends and I were discussing the more creative party dress codes the other day over lunch. One of them (hi Sue!) had us all cracking up over her interpretation of ‘Casual Chic’. She said that when she sees this on an invitation she’s tempted to show up in something like sweatpants and a head covering. And what’s ‘Beach Chic’? Rudolph Valentino in a bikini?

Speaking of ‘Casual Chic’, The Child tells me that when she was in college she and her friends kept getting invited to events calling for ‘Casual Chic’ attire, and she said it got to be a running joke because they never knew what it meant either. Though they do seem to ‘get’ ‘Formal’. 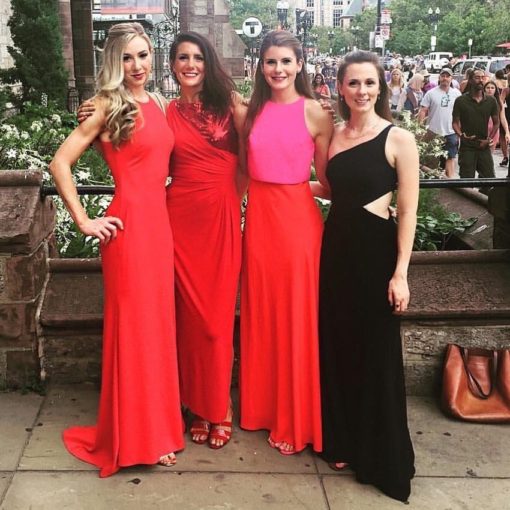 Oh, while we’re on ‘Formal’, my favorite party of the year is one I call The Prom because I get to really dress up, which I love. It’s a dinner dance and the dress code is ‘Black Tie, White Tie, or Full Military Dress’. Which tempts me to wear combat boots with my taffeta skirt. 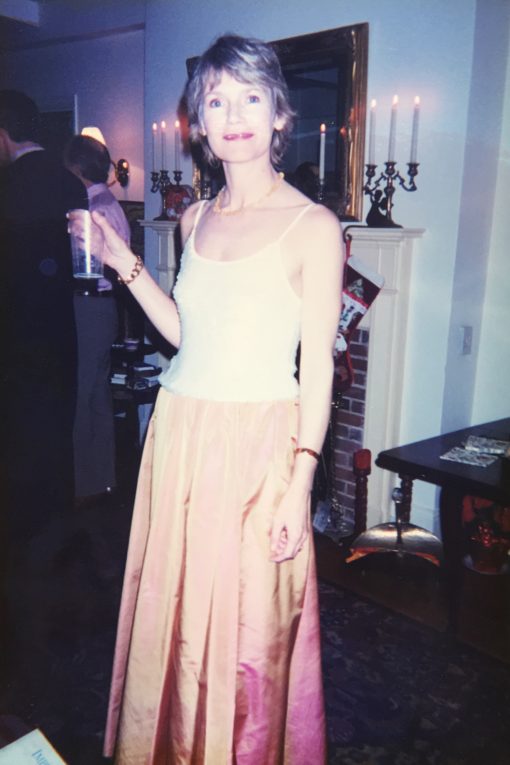 Me in my One Long Skirt. Without the combat boots

That picture was taken at one of my late belated Tree-Trim parties, which is how I got my Christmas tree decorated Back in The Day. (I hate decorating, but love parties, so combined the two with great success. If you’re interested, I’ve got a funny story about this called ‘(No) Tannenbaum.’ These days, with no Santa-believing Child at home, I not only skip the decorating, I skip the whole tree.

But when I did send out invitations to those Tree Trims, I admit that I was guilty of adding a little note to dress ‘Festive’. Which, to me, meant dragging out the ole taffeta skirt. 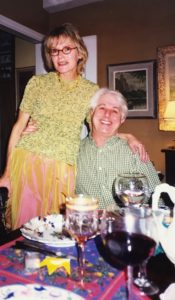 Yup. Same skirt. And yes, The Child is wearing a dress with a reindeer on it

And to everyone else, ‘Festive’ meant pretty much anything they wanted. Why, my guests didn’t even have to wear the festive little crowns that came in the Christmas crackers if they didn’t want to. 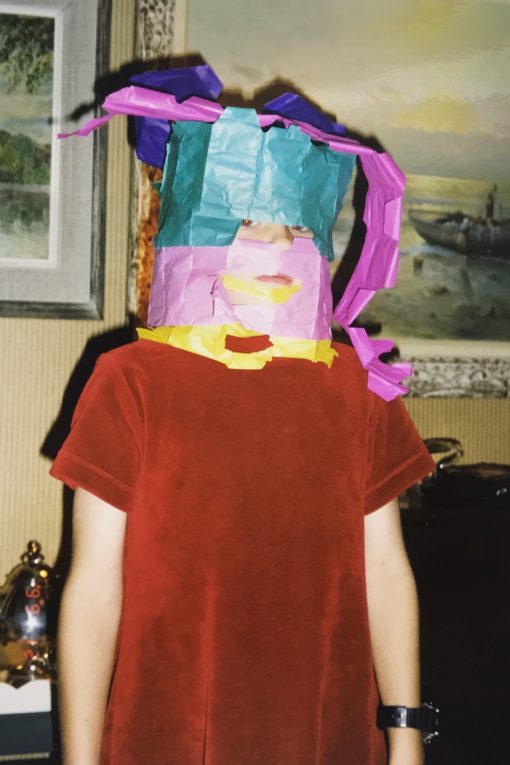 The Child appropriates all the Christmas Cracker Crowns, thus saving other guests the indignity of wearing them

Nowadays I’m even more casual, if that’s possible, in my interpretation of ‘Festive.’ Given a ‘Festive’ occasion, I pretty much wear whatever I want — jeans, even — and slap a tiara on top. Yes, I actually have a tiara. My Favorite Sister got it for me a few birthdays ago, and now I wear it not only on every birthday, but pretty much every chance I get. Nobody gives me a second glance, because at my age I’m invisible anyway. 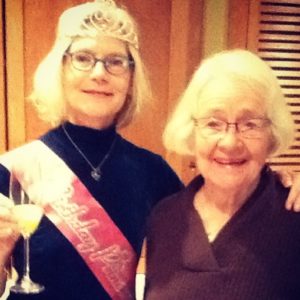 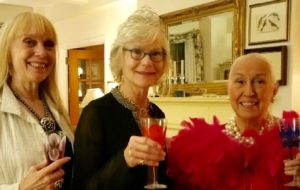 Most recent (public) tiara appearance. With very festive friends at a recent b’day

Oh! Before I go, I should explain what occasion The Dude was dressed for in that picture at the top of this post. No, he wasn’t on his way to a ‘Come as you are’ event, though that would have been wildly entertaining for our hosts. He was dressed for a birding excursion. On his motorcycle.