‘No, my hometown didn’t have a Costco’

When I was growing up Midcentury-Modern Style in the Midwest, my very small home town had a main street with a few stores (and several taverns) on it.

If you wanted to, say, buy a Christmas present for your mom (Evening in Paris was a popular choice), you’d take your allowance or your paper route money and go to the Dime Store. (Ours was a Ben Franklin, but we always called it the “Dime Store”.) Which was owned by a really crabby guy who totally didn’t like kids and would follow you around like you were going to shoplift. There really wasn’t any other option.

Then, sometime after I’d gone off to college, a Walmart came to town. It was out on the west end by the Dairy King (totally different from the Dairy Queen). A (gasp) Walmart. 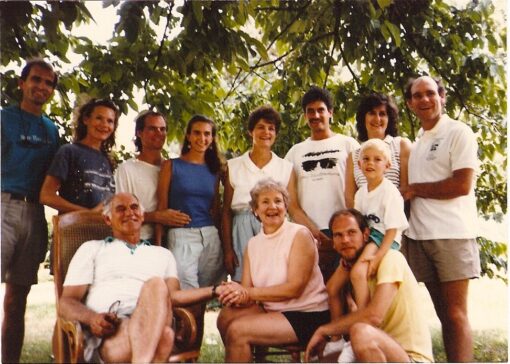 My Personal Family. In the front yard of the house I grew up in — in my Walmart-welcoming home town

Did my town protest? Did they try to keep that Walmart out? No way. They welcomed it, big-time. I remember reading a Big Story about its Grand Opening in the local paper (which I subscribed to because I worked there during the summers.) And it was only a matter of time — and not much time, either — before everyone was shopping at this new Walmart.

They weren’t crabby at Walmart, for one thing. They had (and still do have) these Greeters, who go “Welcome to Walmart” when you come in the door, and say “Thank you for shopping, please come again” when you leave. Take that, crabby Dime Store Guy. 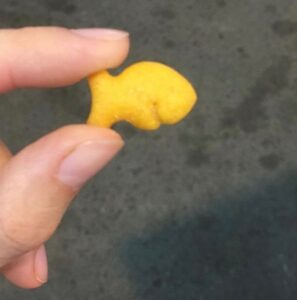 Why is this goldfish smiling? Maybe because you can buy him — and dozens and dozens of his friends — at Walmart

And Walmart had everything. You could buy not only giant cartons of milk and huuuuuge bags of Cheetos, you could get rose mulch and stereos and DVDs and khaki pants and baby shoes and glitter. My Nephew once bought a BB gun there. (Walmart cheerfully took it back, even though it had been fired, when he returned it for some reason I do not recall, probably involving his absent mother.) 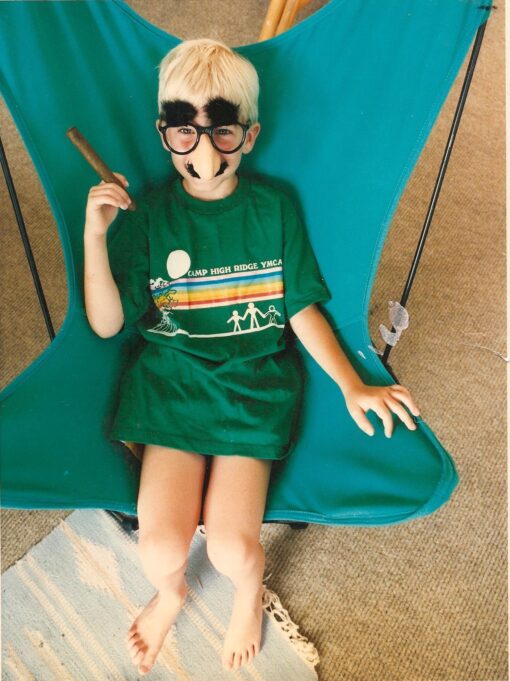 Nephew Phil (or is that Groucho?) without his Walmart BB gun. But I bet that’s where he got that disguise

Walmart became so popular (at least in my family) that I remember coming home for some sort of school break, sitting at the kitchen table sipping coffee, when Mom goes, “Who wants to go on a Walmart Run?” Turns out a “Walmart Run” was a Thing. 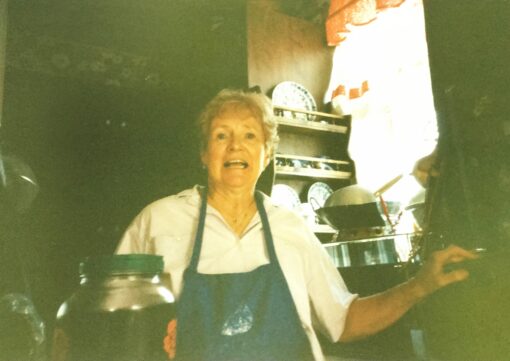 Yup. My Mom got her coffee at Walmart. And after consuming some, she’d go right back to Walmart

My Late Lamented Dad even called The Child “Walmart” — before and after she was born. See, while preggers with her, I was of course asked many times what names The Dude and I were considering for our imminent bundle of joy. Sometimes, if feeling feisty, I’d do a riff on the trend for non-traditional names. Which is perfectly okay by me, O You Who Have Named Your Child “Brie”. I just happen to think it amusing to name a child after a type of cheese. If “Brie” is cool, why not “Cheddar”? Or, how ’bout this one: “Time for supper, Camembert!” 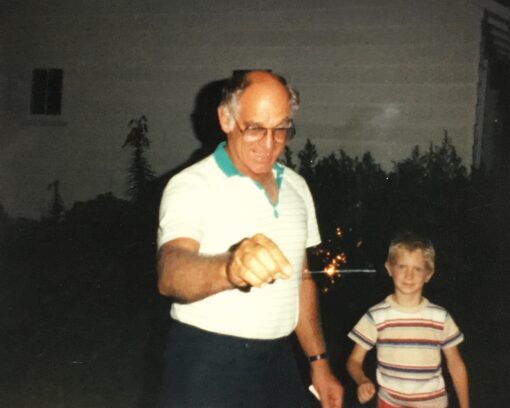 My father amusing some random child whose name I can’t recall (tho I bet it wasn’t “Roquefort”) with a sparkler, no doubt purchased at Walmart

Anyway, I’d been amusing my father with this funny-name bit; had run through the Cheese Names and the State Names (If “Montana” and “Dakota” are cool, why not “Delaware”?) and even the Neighborhoods in New York City names (If “Chelsea” is hip, why not “Soho”? Or “Tribeca”?) Well, I was just getting into the Store Names (I like “Tiffany” for a girl, and I think “Duane Reade” is rather distinguished for a boy, don’t you?) — when Dad pipes up. “Walmart”! It’s a great name for a boy or a girl.

So he called her “Walmart”. For years.

Speaking of children, we recently enjoyed our annual visit from The Dude’s nephew, his amazing wife and their three-count-em-three frisky and adorable girls. The Dude and I, being grandchildless, are drawn like moths to their collective flame. But then so are The Child and her BF. 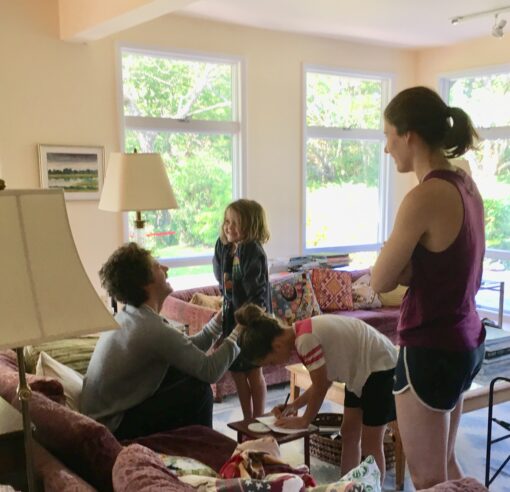 The Child and BF roughhousing (er, playing) with the Adorable Girls

This is the nephew and wife who started a chocolate company (yes, they started it!) that you may have heard of. It’s called Taza, and makes incredibly delish stone-ground chocolate. They make dozens of products (I have to hide the chocolate-covered hazelnuts from The Dude’s Brother Bill) but on this visit they were most excited by a new one they developed for Costco. 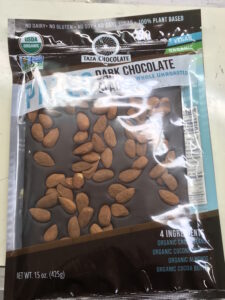 It’s called the Paleo Dark Chocolate Slab. And you can only get it at Costco

Now, you can indeed find Taza products at your friendly neighborhood Walmart. But Costco, unlike Walmart, is a membership-only buying club. And it, well, has a certain je ne sais quois. New York City Upper East-Siders who wouldn’t be caught dead in a Walmart will happily drive their Range Rovers up to Northern Manhattan (yes, I said “Manhattan”) to stock up on organic stock from free-range chickens (as well as their eggs) and almond milk (no doubt from free-range almonds) and the like. 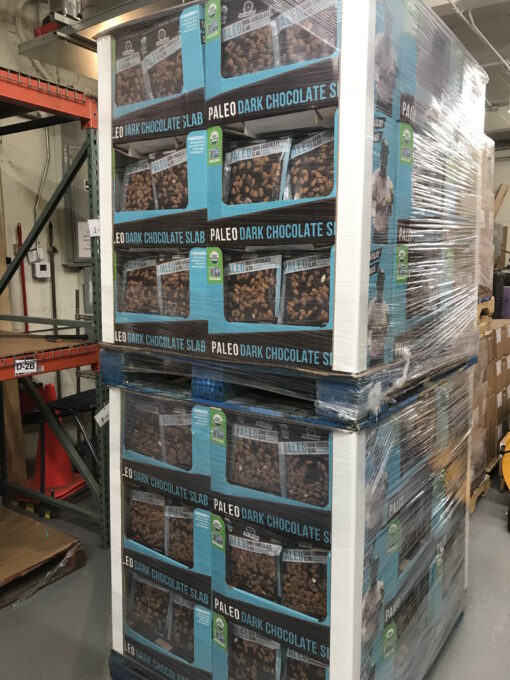 How the Paleo display will look in a Costco. If you are lucky enough to be able to go to Costco

This new Taza product, being Paleo and all, is a perfect foodie fit for Costco-goers. (I tried some, and even though I am not a Paleo Person, it certainly hit my personal Sweet Spot.) We were pretty excited for them — and for the lucky Costco-goers who get to buy it. I’m betting it’ll be such a big hit that sometime soon I’ll be hearing my fellow Upper East-Siders saying, “Hey, who wants to go on a Costco Run?” 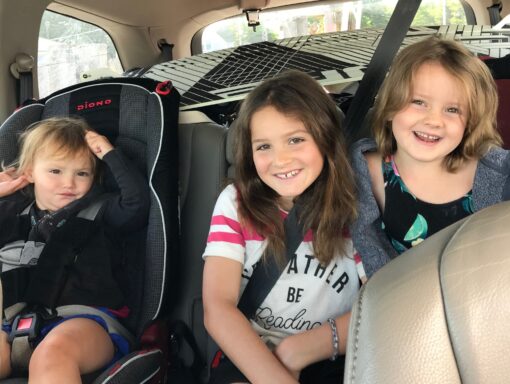 No need for a Costco Run here. These lucky girls have parents who own the whole darned chocolate company

36 thoughts on “Who wants to go on a Walmart Run?”