“Is that a banana on the wall or are you just glad to be at Art Basel?”

I was a little late to the party on this one. By the time I was aware of this notorious artwork — the one consisting of a banana and a strip of duct tape — an art critic/prankster had eaten it. Seriously. So the artist, Maurizio Cattelan, withdrew the piece, or what was left of it. (The peel?) BTW, I just love calling this artwork a “piece”, since it so definitely was a piece–of fruit. (Though others might call it a piece of work.) 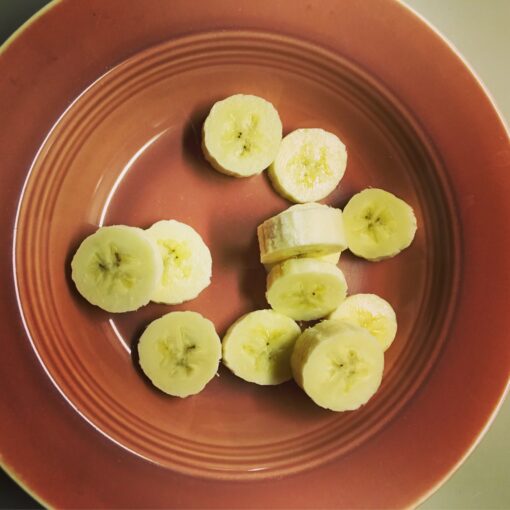 Yes, I ate my banana too. Here it is, genteelly sliced into a bowl. Not ripped from a wall at Art Basel

What it was called was “Comedian”, and it was fetching some pretty hilarious prices. (I say “prices” because the clever artist issued three “editions”, involving, I am guessing, three different bananas as well as three different strips of duct tape.) Last I heard, one had sold for $150,000.

Incidentally, the photo at the top of this piece is not the real “Comedian.” I was afraid of violating copyright laws by posting a photo I found online, so I just grabbed a banana and made my own — lending new practical meaning to the critical expression “Hey, I could do that.” (If you want to see the original “Comedian”, just click here to read a Times piece about it.) Actually, I think I like my version better; I used green duct tape, which, to me anyway, feels more “of a piece” with a natural banana than the silver that Cattelan used.

Cattelan, oddly enough, has a history of people pilfering his works. His other notorious piece, a solid gold toilet, has also gone missing. But I doubt if anyone ate it. 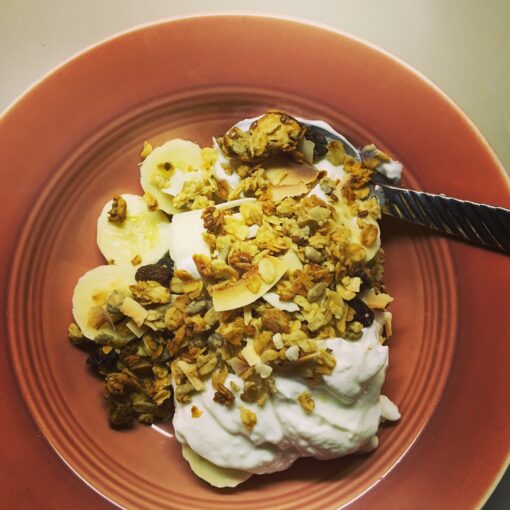 Speaking of yogurt, I once visited a show at MoMA which featured yogurt lids on a wall. There were also, in the same show, a whale skeleton suspended from a ceiling, an elevator cab stranded in the middle of a room, and — best of all — an empty shoebox just, well, sitting there on a floor.

The curator’s description of the whale skeleton. When they say “graphite”, they mean the artist drew on it with a pencil. A Number 2 pencil, to be exact

I actually made a little movie of my visit that day. Which is pretty darned entertaining, if I do say so myself. It’s called “MoMA’s New Clothes”, which kind of gives you a hint about how I feel about the exhibits. You can spend a few minutes chuckling while you watch it:

Or, if you’re pressed for time (which, let’s face it, most of us are around this time of year) you can just snicker at my screenshots. 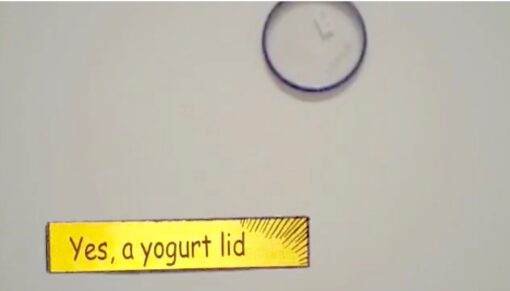 Here’s one of the yogurt lids. My Flip video camera was moving around, so it’s a tad blurry, but I think you’ll recognize that Dannon-like shape for what it is

The best exhibit of all was the empty shoebox. Yup. Like I said — an empty shoebox. It was just sitting there. On the floor. All alone, except for a beefy guard. Who was trying to keep people from what? Certainly not eating it, like the ill-fated banana. Maybe stepping on it? Putting their shoes or (more likely) their old check stubs in it? Whatever. I got some pretty fun reactions from bystanding MoMA-goers. (I take it back. You should take a couple of minutes and watch the video.) 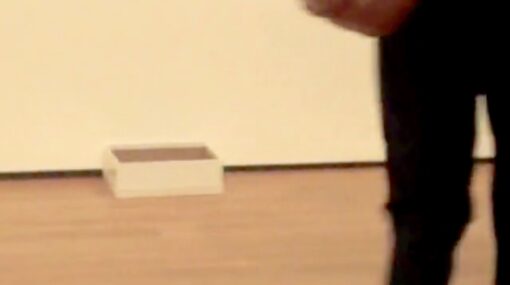 There it is. The empty shoebox, in all its glory

You could watch it while you eat a banana. Just make sure to take the duct tape off first.

4 thoughts on “The emperor’s new produce”