‘A song sends me rocketing down Memory Lane, and reaching for my tiara’

The other morning I was in Starbucks, practicing my New Post-Election Niceness (‘After you’. No, ‘after you’. No no I insist! ‘After you‘) when I realized that the Monkees were playing on the sound system.

Yup, it was ‘Daydream Believer’, sung by the Actual Monkees, not some cover band. And not only were the Young Moms Wrestling with Strollers on the Way to School Drop-off and the Scrubs-Clad New York Hospital Med Students and Orderlies bopping to the beat, but so were the Starbucks baristas. One of them, a young man with a most impressive set of dreads tucked up under his requisite foodservice cap, was actually singing along. He knew the words to ‘Daydream Believer’, a song that was popular about a zillion years ago when I was in high school.

Speaking of popular, speaking of high school. Scroll down a bit for a photo of me from Way Back When. As you can see, looks-wise, I wouldn’t exactly scare the horses, but my kind of long-haired lankiness wasn’t exactly in fashion back then. At least not where I grew up. The really popular girls — the ones who went steady with the Guys on the Basketball Team (we had no football team) or the Guys in Bands (and I don’t mean bands with trombones in them) — were ‘cute’ and ‘perky’, and with, um, more 3-dimensional figures than mine. They were usually also cheerleaders.

Now, I did try out for cheerleading. Once. Let’s just say I am choreographically challenged, since I most definitely bombed. In later years, I couldn’t follow along with Richard Simmons or Jane Fonda, so it should come as no surprise that I couldn’t master the art of the cartwheel, even as a sixteen-year-old. I did love some of the actual cheers, though: “Go go! Where where? We want a basket — down there!” and “Get that bee-ball bee-ball bee-ball. Get that bee-ball, go go go!!” are two of my faves.

I did go out with a basketball player there for a while, though. (He was so good-looking, he scared my parents silly.) His dad was the principal of our high school, but only for a year or two, and then Handsome Boy and his whole family moved away. (Much to my parents’ relief, I’m sure.) I never knew why. But we teenagers were vastly uninterested in what grownups did and why.

The thing I remembered most about the time I was going steady with the basketball player did have something to do with his parents, though. It was the time we were all watching TV in the basement rec room and I had to, um, “use the ladies’ room”, which was located immediately to the right and behind the couch where Handsome Boy’s mom and dad and brothers were sitting. 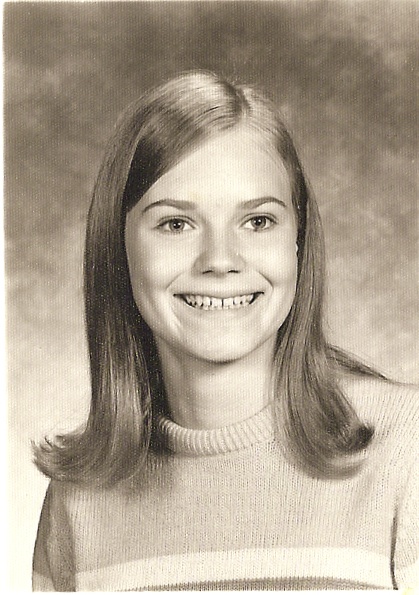 Me, when I was dating Handsome Boy. His ring is hanging on a chain around my neck under that sweater, which I bought with babysitting money from a ritzy store in Centralia

I was mortified to think that Handsome Boy’s whole family — including his dad, the principal — might hear me “powdering my nose”, so I sort of perched on the very edge of the seat so what I was doing wouldn’t make that telltale splashing sound. Everything was going (pun intended) just peachy when I noticed this little yellow river heading for the crack under the bathroom door. If I didn’t stop it, and stop it soon, it was going to trickle out and appear right next to the parental feet. So, what did I do? I grabbed a couple of towels hanging next to the sink and sort of tossed them, forming a makeshift dam.

I was saved, but at a cost. See, those towels were fancy little guest towels. I’m betting the mom got them as a wedding present. They were pristinely white, with her initials embroidered on them in gold. They had probably never even been washed, much less used — until then, when I rinsed them out in the sink, wrung them out, painstakingly smoothed out the wrinkles, then re-hung them neatly. (I was in that bathroom a long time.)

But let’s get back to Homecoming. So we can talk about real mortification.

When I was in high school, the girls who got to be in the Homecoming Court were decided, quite literally, by popular vote. Everybody in the whole school voted, and the ten girls from the junior and senior classes who got the most votes were the Queen Candidates.

To be honest, I can’t remember how the boys were picked. By height, maybe. But for we girls, I cannot stress to you enough what a big deal this was. For one thing, the winners were announced right during school, over the public address system. There was nowhere to hide as the names were read, slowly, loudly, your fixed smile tightening as the total got to ‘ten’, and yours wasn’t one of them.

There was the year when I wasn’t picked (when I was a junior), and the year I was (when I was a senior). And I have to tell you, as superficial as it sounds, that I much preferred the being-picked year. It’s a lot of work pretending that you don’t care. 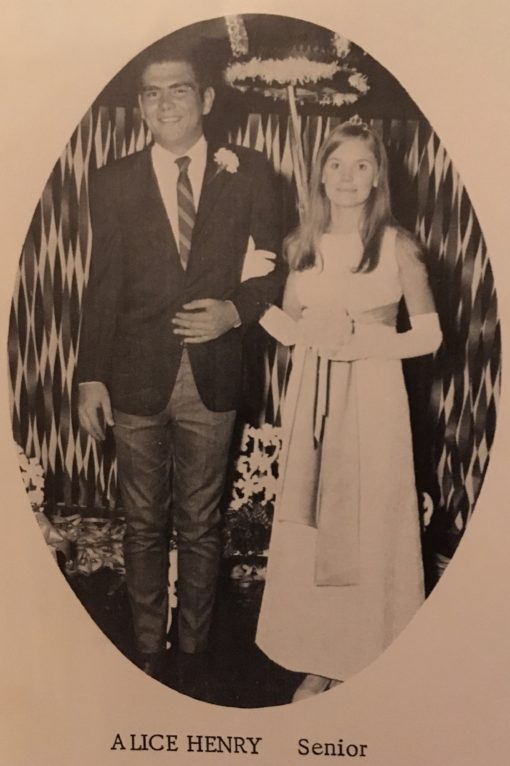 Here I am, in all my tiara-topped Homecoming Glory, clutching a bouquet and the arm of my uncomfortable-looking escort. Oh and wearing the crushed-velvet gown I sewed myself

Of course I wasn’t elected the Queen. It was heady enough stuff being one of the ten and wearing a long dress and a tiara. Being the winner would have been gilding the popularity lily, at least for me. No, this really pretty super-nice girl, kind of the Julia Roberts of our school, was Queen. Her name was Barbie, and she was going steady with a Guy From Another School (the coolest thing of all, dating-wise). Barbie wore his class ring on her finger, wrapped in angora yarn so it wouldn’t be too loose, even over her white glove. Red angora, to match her gown. Oh, the guy’s last name was Doll, and they eventually married. Think about it.

A quick note about dating when I was in high school. Basically, boys and girls ‘went with’ each other, one guy/girl pairing at a time. You wouldn’t, say, go with Tommy to the movies one night, then Jimmy to a dance the next. While ‘going with’ a guy, you usually wore his class ring to signify your ‘taken-ness’. ‘Going with’ someone lasted sometimes for a few weeks, sometimes a whole semester — sometimes, even, till you got married. Like Barbie and the guy named Doll.

The thing that was the saddest part of this whole social arrangement, though, was that if you smiled at a boy or — gasp — talked to him, it meant that you ‘liked’ him and wanted to go out with him. Basically, boys and girls couldn’t be friends. When The Child reached high school age and had actual friends who were boys — and not boyfriends — I found this both marvelous and strange. Just goes to show you that sometimes things weren’t better in the Good Old Days. 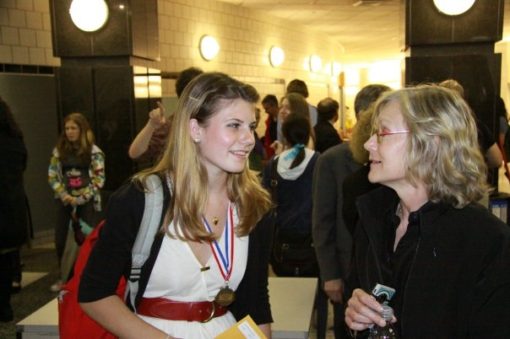 The Child, at about the same age as me in this story, wearing a medal instead of a tiara. She was on stage, too, but for Awards Night. And she didn’t have to sew her dress

But let’s end on a sparkly note. I actually have a tiara now, though it’s not the same one. I’m pretty sure we didn’t get to keep those; that they went back into a closely-guarded Queen Candidate Cabinet or something. My sister gave me my current tiara, and it makes its first appearance in my story ‘All Saints’ (Birth)day’.

I wear it every chance I get. (It’s a little-known fact that a tiara goes with everything.) I dusted it off just a couple of weeks ago, when I celebrated a birthday with a frighteningly large number attached to it. Here I am, with two members of my court of lovely attendants. Oh, and that night I was most definitely a winner. 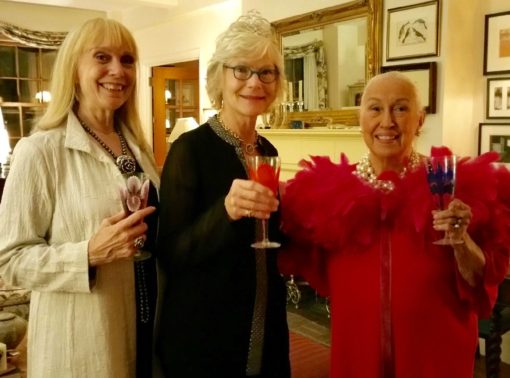 No, I wasn’t up on stage. But I did get to clutch a glass of champagne instead of a bouquet — and I did get to be Queen

35 thoughts on “The Daydream Believer and the Homecoming Queen”