‘Ratty and faded, but I just can’t bear to part with it’

I can understand why some people might be into the so-called “life-changing magic of tidying up”. But I’m no Marie Kondo. Not when it comes to discarding certain tattered treasures in my closet, at any rate.

Take this coat. Please. I bought it at the Gap, along with a teensy matching version, way back when The Child was actually a child. As you can see, we had a kind of Mother/Daughter Thing going on. 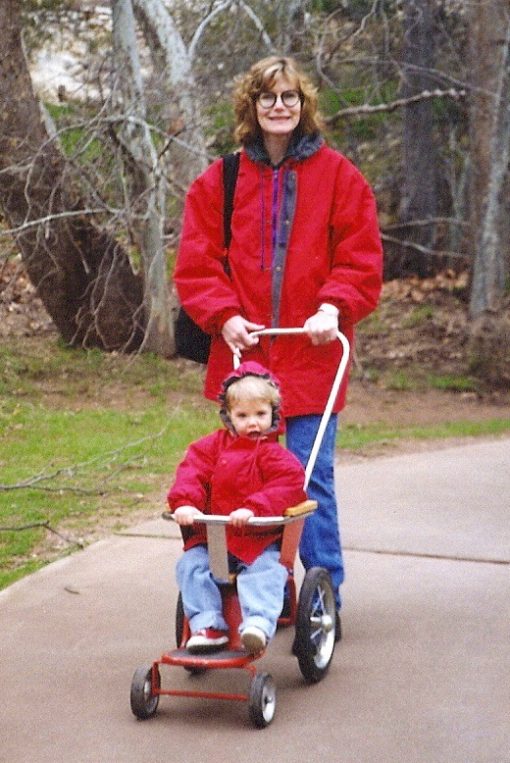 Well, time went by and The Child grew out of hers. I’m sure we “handed it on” to some even-smaller child somewhere. So we never got a chance to see it get faded and tattered. But mine? 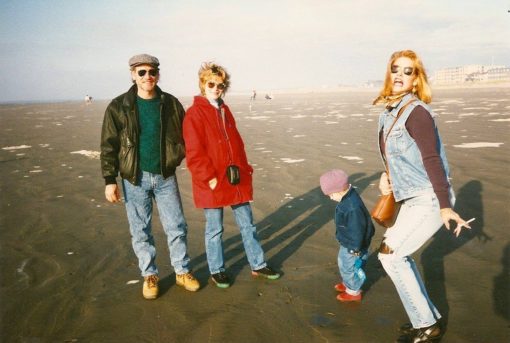 The Child, still childlike here, has outgrown and passed on her coat. Not me. Not sure if Middle Younger Brother Roger and gorgeous Nobody-Doesn’t-Like-Jen still sport those snappy jackets

Why do I stubbornly hang on to this coat? Is it because it’s…red? I ask this because I have another article of clothing I can’t bear to part with which happens to share the same hue — as well as some of the same history. 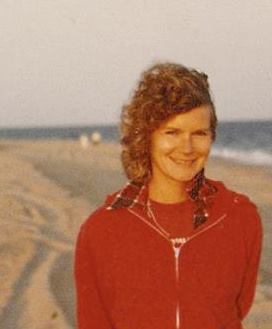 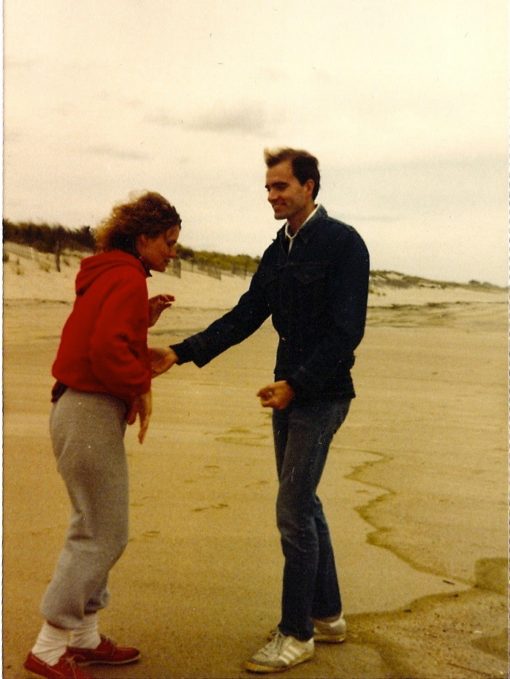 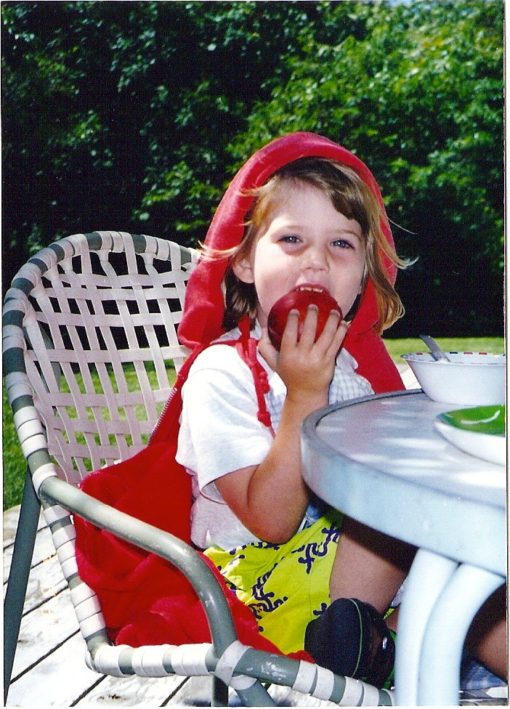 Precious sweatshirt sometimes on loan, but never given away

Or is it because the coat, like the sweatshirt, has seen itself worn to bits on only the happiest of occasions? Like strolling on the beach with Rog and Jen at Favorite Younger Sister Laura’s.  And walking on the (gulp) railroad tracks with The Dude. 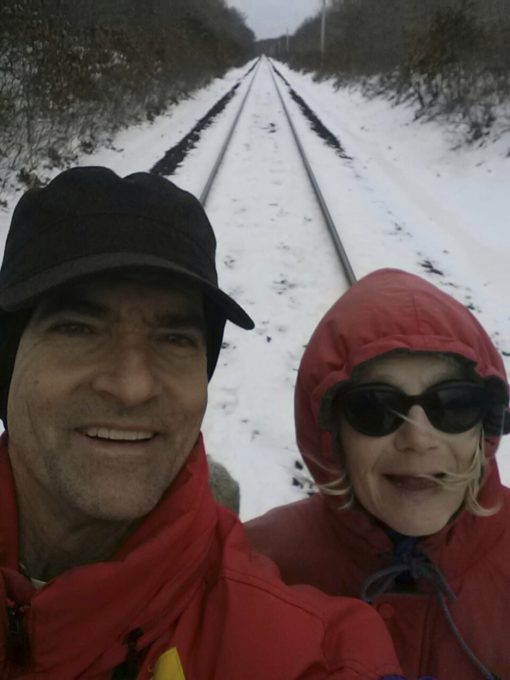 The Dude and I waiting for the train. (And hoping the engineer will notice all that red)

Or hiking in the Walking Dunes. Which is where that picture at the top of this piece was taken, probably on a Thanksgiving. Which, as you Faithful Readers know by now, is absolutely The Best Holiday Ever (See “Turkey Shoot”) and my Favorite Family Time by Far (See “Flipping the Bird”). (Well, except maybe for weddings. Hard to beat a good wedding. Even if most of the time no turkey or pumpkin pie is on the menu.) 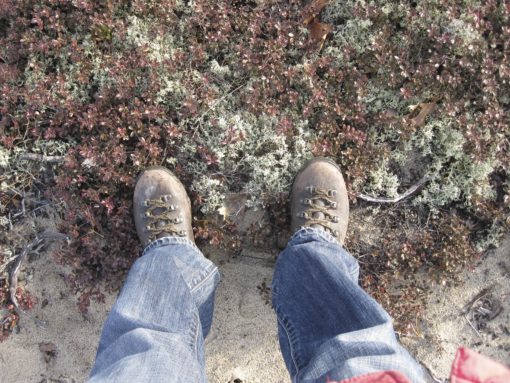 A look back — and down — on a hike with The Coat

So, this memory-infused article of outerwear has gotten outerworn until it’s worn plumb out. It got so shredded (and so ventilated) that I finally did buy a replacement last year. But have I thrown the old one out? Three guesses, and the first two don’t count. 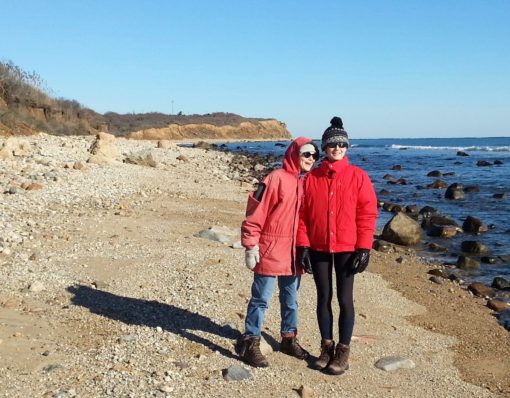 Me, still in my coat, next to The Child, who probably wouldn’t fit into it even if I did deign to give it to her

I thought of all this yesterday because I happened to be happily sporting my favorite flip flops (never ever call them “thongs”, saith The Child) when they self-destructed. 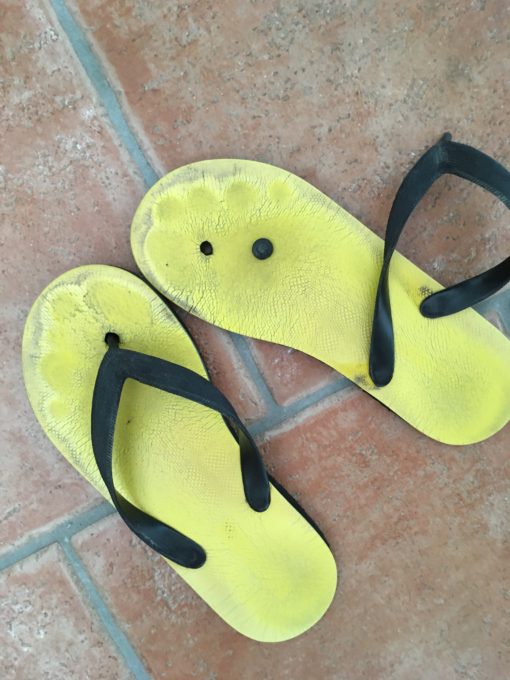 I blew out my flip flop. But did not, fortunately, step on a pop top

Sadly, a flip that’s flopped is no good to anyone. So on to Flipflop Margaritaville they went. But I was sorry to see them go. These two have been everywhere. There’s a Panamanian thorn embedded in one that I could never remove; every once in a while, if I stepped Just So, I’d feel it and think of the bull goring I witnessed that day. I was able to dig up a little Panamanian film clip where the flip flops — but sadly, neither bulls nor goring — make a cameo appearance. Water shenanigans are involved:

Well, I guess that’s about it for this week. And for that red coat. I’ve decided: now that I’ve paid it this blogging tribute, I can finally toss it out. (Marie will be pleased, as will The Child, who is a Kondo Fan.) But first I have to get busy turning another pair of old jeans into cutoffs. 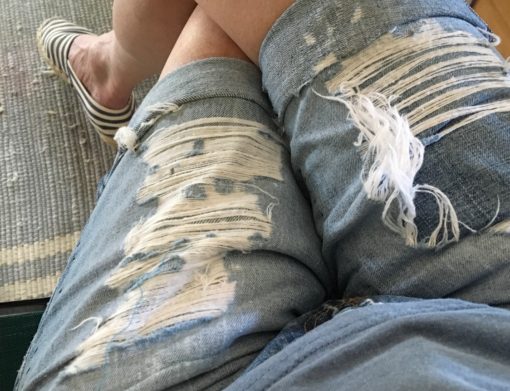 These jeans are probably older than you

11 thoughts on “The Coat of Many Stories”