‘An it’s-too-nice-out-to-be-chained-to-a-computer story featuring funny signs, though not necessarily about Spring’

Okay okay. I have a zillion ideas for stories that should amuse the bejeepers out of you. I’ve got trip stories, like the one about when we went to Rome right after Chernobyl and nobody was there. Or the one where we left The Child by the side of the road next to a pueblo.

I’ve got ad-biz stories, like the one where we went to South Africa for a diaper shoot and the baby wrangler would only eat foods that started with ‘C’. Or the one where I got lost finding my office in the new Ogilvy digs at Worldwide Plaza and wound up in a British documentary.

And of course I still have plenty of fuel left in the family-story tank — plus major holdings indeed in the growing-up-in-a-small-town memory bank.

But. It is Spring. And Spring is distracting. I’ve been so distracted that the photo at the top of this post was mistakenly snapped by my iPhone-clutching hand while strolling along checking out Spring in New York City. (Actually, I was in a rush to deliver some crutches to The Child, who had just sprained her ankle badly in a fall from a climbing wall — but that’s, ahem, another story.) 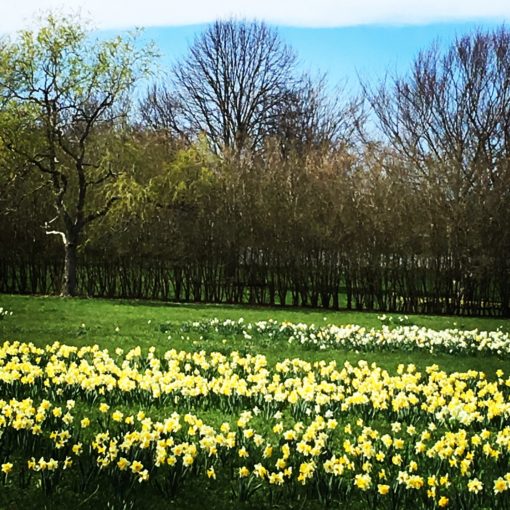 Photo taken while wandering lonely as a cloud. If one can ‘wander’ while on a bike

And then this weekend, while on a bike ride out in Amagansett, hoping to clear my head and focus — focus, already — on a story, I found signs of Spring springing out at me from every which way. END_OF_DOCUMENT_TOKEN_TO_BE_REPLACED